A European universities consortium has gathered at University of Limerick to deepen alignment and to seek funding under a key initiative.

The European Margins Engaging for Regional and Global Empowerment (EMERGE) consortium met at UL on December 12.

EMERGE consists of a group of diverse universities situated on the peripheries of Europe, with the core aim of developing flexible and innovative approaches to knowledge co-creation and human capital.

UL President Professor Kerstin Mey signed a memorandum of understanding with the various University leaders in Brussels in March, signalling an intent to lead a European Universities Initiative consortium.

UL was the first Irish university to register its intent to apply to the initiative as a coordinator of EMERGE, which it hopes to do early in 2023.

“I know that our institutions have had a busy period since our gathering in the Irish Embassy in Brussels, but I am delighted that we can come together again to meet the representatives from the consortium.

“Today, and over the next number of days, we will work on building the alignment and I know that University of Limerick and indeed professor Mey would be delighted to re-affirm our full support to the mission, vision and values of the EMERGE consortium.

“Since we last met in Brussels, we began our 50th anniversary celebrations of the founding of our institution here in Limerick. It also coincided with the 50th anniversary of the signing of the European membership treaty.

“Through EMERGE, we can avail of the opportunities that we have to use the consortium for bi- and multi-lateral projects as well as for funding from Europe.

“In these ways, we can enhance trust and understanding and strengthen the consortium as a whole,” Professor Kilcommins added.

The EMERGE consortium was founded in 2019 by Dr Lesley Lelourec, Vice President for Internationalisation, Université Rennes 2, with the aim of becoming a European Universities Initiative.

The UL gathering was the first in person meeting of the leaders of universities who have over 110,000 students combined, and the commitment ceremony was followed by three intensive days of working together to develop their proposal.

While each university has different cultures, languages and educational programs, the consortium aims to build a long-term joint strategy aiming to create systemic, structural and sustainable change in how they operate and cooperate to benefit of their communities and stakeholders.

The group gathered at UL enjoyed performances by George Kenny and Ella McGrory, both students of the Irish World Academy of Music and Dance, while discussing and planning the long-term strategy for the EMERGE Consortium. 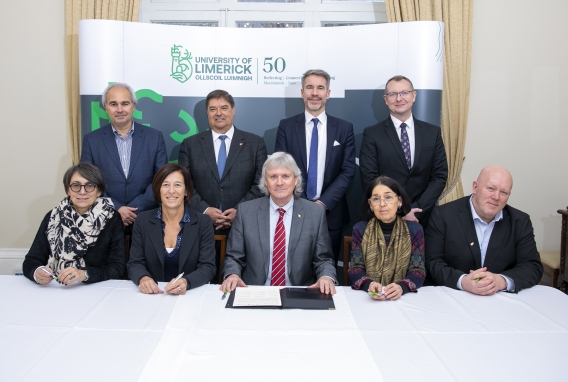