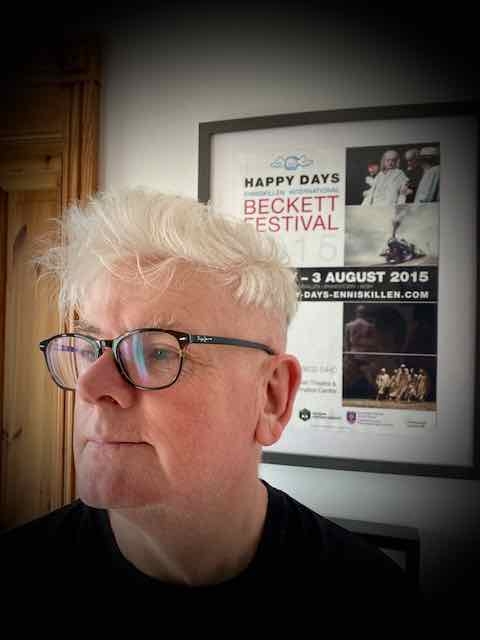 He is the author of numerous books and articles on media and music which have been adopted in classrooms all over the world. His book Understanding The Media (2014) is now in its third edition. In recent years he has published extensively on David Bowie, Joy Division and Morrissey with his colleagues Dr. Martin J. Power and Dr. Aileen Dillane. His work in the area of Media Sociology continues to focus on media constructions of poverty, homelessness and social welfare. He is Co-Editor for the Rowman & Littlefield Book Series on Popular Music(s) Matter and Discourse, Power and Society.

He co-writes and co-performs The Cedarwood Chronicles with Gavin Friday as part of Gavin Friday Presents on the U2 radio station U2 X-Radio. The show is broadcast monthly in the USA and Canada on the Sirius Platform.

In 2022 Eoin is working with the avant garde group The Virgin Prunes. He presents Virgin Prunes Talk which examines each of the group's album releases.

A lifelong advocate for Interdisciplinary approaches to teaching and research, Eoin teaches on the MA in Creative Writing, convening the module Creative Writers in The Community. He is also the course director for the MA in Youth, Community and Social Regeneration at UL.

Eoin was one of a number of sleeve note contributors to the 2019 re-issue of The Radiator's 'Ghostown' album, produced by Toni Visconti. His essay 'Singing As Violence' accompanies the 2019 release of Slow Riot's album 'G.A.D' released by Straight Lines Are Fine. In 2020, he featured in the Boomtown Rats documentary 'Citizens of Boomtown' (dir by Billy McGrath) along with others including Bono, Sting, Sinead O'Connor, Joseph O'Connor, Niall Stokes.

As part of the group Frigid Stars (with Professor David Meagher, Sons of Southern Ulster) Eoin has collaborated with the singer/artist/actor Gavin Friday to record a new version of The Fall's song 'Slates, Slags etc'. The recording was featured as part of the day long symposium on The Fall on Nov 7th 2019. He has also performed with his group Section 17 at events focused on men and mental health. His current experimental music project is a collaboration with Aidan McNamara (Section 17).

In December 2019, RTE Radio 1's Poetry Programme broadcast his poem 'Panthera' which deals with the Housing Crisis. His poem 'The Bodhi Tree' was published by Hennessy New Irish Writing in the Irish Times in June 2017 and was subsequently shortlisted for a Hennessy Award for Emerging Poetry in 2018.

His short story 'Making A Stand' was published by the Irish Times in December 2017. Eoin's flash fiction story about dementia - 'Mrs Flood' - was broadcast by RTE Radio 1's The Bookshow in December, 2014 and subsequently published in 100 Words, 100 Books by RTE/The O'Brien Press.

His creative writing has been published in numerous journals including The Irish Times; Janus Literary Magazine; The Stony Thursday Book, edited by Martin Dyar; Southwords; The Ogham Stone; The Poetry Bus; Boyne Berries; Number Eleven; The Bohemyth; The Old Limerick Journal; The HCE Review and The Galway Review.

He wrote the introduction to John Liddy's major poem Arias of Consolation, published in 2021. His poem 'Remnants' will be published in Issue 10 of the Poetry Bus Magazine in July 2022.

In April 2022, he curated the poetry broadsheet APRIL IS THE CRUELLEST MONTH for National Poetry Day. The broadsheet includes poetry by Donal Ryan, Denise Chaila, Willzee and Emily Cullen.

Eoin has been interviewed in numerous media settings including RTE Radio 1; RTE 1 Television, Newstalk, BBC Radio 4, BBC Radio Ulster, Indie 103 Los Angeles, Reuters, The Irish Times and Irish Independent. In addition, he has contributed to a variety of panels on social and cultural themes including at the Electric Picnic Music Festival, Ireland and at the Institute for Contemporary Arts in London.

He has convened three public interviews with Gavin Friday (ex - Virgin Prunes) at the Dublin David Bowie Festival, at the Dalkey Book Festival and at the Dun Laoghaire Vinyl Festival.

A full list of his books, journal articles, book chapters and other publications can be found elsewhere on this site.

I am a Cultural Sociologist by training and have taught and researched in this area for over three decades. I am also a published Creative Writer.

The following are my current academic research and writing projects. All are undertaken under the auspices of the Centre for the Study of Popular Music and Popular Culture at UL.

REASONABLE PEOPLE VS. THE SINISTER FRINGE Interrogating the framing of Ireland's water charge protestors through the media politics of dissent

"I sing out to the youth of the slums": Morrissey and Class Disgust

Your Gonna Need Someone On Your Side: Morrissey and Chicano/a and Latino/a Fandom

Eoin Devereux and Melissa Hidalgo (2015) Your Gonna Need Someone On Your Side: Morrissey and Chicano/a and Latino/a Fandom . UK Participations :197-217

Thinking Outside The Charity Box: Media Coverage of Homelessness

I Can Have Both: A Queer Reading of Morrissey

'Why bother seeing the world for real?': Google Street View and the representation of a stigmatised neighbourhood

Tarring everyone with the same shorthand? Journalists, stigmatization and social exclusion

A push and a shove and the land is ours: Morrissey's counter-hegemonic stance(s) on social class

Power, MJ,Dillane, A,Devereux, E (2012) A push and a shove and the land is ours: Morrissey's counter-hegemonic stance(s) on social class. Australia Critical Discourse Studies :375-392

From the Mouths of Janus: Irish Politicians Constructions of Transnational EU Migrants in Ireland

Tarring everyone with the same shorthand? Journalists, stigmatization & social exclusion

At the edge: media constructions of a stigmatised Irish housing estate

Devereux, E; Haynes, A; Power, MJ (2011) At the edge: media constructions of a stigmatised Irish housing estate. Journal Of Housing And The Built Environment :123-142

In The Know? Media, Migration and Public Beliefs

'Suing the Pope and scandalising the people: Irish attitudes to sexual abuse by clergy pre- and post-screening of a critical documentary'

Haynes, A and Devereux, E and Breen, MJ (2009) In the Know. Media, Migration and Public Beliefs. Translocation: Migration and Social Change, ISSN :1-29

Setting Up Margins: Poverty and Social Exclusion in Ireland

Christmas is Coming: The Media and Homelessness

Devereux, E (2001) Christmas is Coming: The Media and Homelessness. Cornerstone :6-7

Irish Print Media Coverage of the 1998 Sudanese Crisis: The Case of the Irish Times

Irish Print Media Coverage of the 1998 Sudanese Crisis: The Case of The Irish Times

Symbolizing Exclusion: The Codes and Conventions of Current Affairs Television

Devils and Angels: The Rise of Irish Telethon Television

An Introduction to Irish Society: Transitions and Change

Devils and Angels: Television, Ideology and The Coverage of Poverty

Preface to the paperback edition (2017): Something happened on the day he died

Opportunities for Resistance Through Discourse'

In the Frame? Discourses of Migration: An Introduction to the Volume'

Culminating Sounds and (En)visions: Ashes to Ashes and the case for Pierrot

Devereux, E., Dillane, A., and Power, M. (2011) And don't forget the songs that made you sad, and the songs that saved your life' . England : Intellect Morrissey: Fandom, Representations and Identities :13-18

Behind The Headlines: Media Coverage of Social Exclusion in Limerick City - The Case of Moyross

I'm Not The Man You Think I Am: Ambiguity, Authenticity and the Cult of Morrissey

Devereux, E (2009) I'm Not The Man You Think I Am: Ambiguity, Authenticity and the Cult of Morrissey. Jyvlaska : Academy of Finland/Research Center for Contemporary Culture of the Uni Cult, Community and Identity

Being Wild(e) About Morrissey: Fandom and Identity

The Art is in the Absence.

No racists here: Public Opinion and Media Treatment of Asylum Seekers and Refugees.

The Media and Social Exclusion: The Views of Media Professionals

Devereux, E; Haynes, A (2000) The Media and Social Exclusion: The Views of Media Professionals. Dublin : WRC Perception is Power :62-71

The Theatre of Reassurance: Glenroe, its Audience and The Coverage of Social Problems

Devereux, E (1997) The Theatre of Reassurance: Glenroe, its Audience and The Coverage of Social Problems. Media Audiences in Ireland :231-248

Negotiating Community: The Case of an Inner-City Community Development Group

SOFEIR Ireland: The Festive and the Tragic

Conference on 'Solidarity in Europe: are migration and enlargement real challenges?'

E. Devereux, A. Haynes and M. Breen (2004) Conference on 'Solidarity in Europe: are migration and enlargement real challenges?'. :*-*

Devereux, E. with M. Breen (2001) EFACIS Conference Ireland and Europe at times of Reorientation and Re-imagining. :*-*

Fifth Biennial Conference of the British Association For Irish Studies

Devereux, E. (1991) The Annual Conference of the Economic and Social History Society of Ireland. :*-*

In the Frame? Public and Political Discources of Migration

In the Frame: Public and Political Discources of Migration

In the Frame? Public and Political Discourses of Migration

The Songs That Saved Your Life (Again): A Symposium on Morrissey'

The Songs That Saved Your Life (Again): A Two Day Symposium on Morrissey

Dillane, A, Power, M, Devereux, E (2009) The Songs That Saved Your Life (Again): A Two Day Symposium on Morrissey.

No Racists Here: Media Coverage and Public Opinion About Asylum Seekers and Refugees

Devising a Media Strategy for a Community Development Project

Let's start with your own lives: using the autobiographical in the teaching of undergraduate sociology

Devereux, E (2000) Let's start with your own lives: using the autobiographical in the teaching of undergraduate sociology.

The Media and Social Exclusion: The Views of Media Professionals

Devereux, E; Haynes, A (2000) The Media and Social Exclusion: The Views of Media Professionals.

The Media and Social Exclusion

The Theatre of Reassurance: Glenroe, Its Audience and The Coverage of Social Problems.

Devereux, E (1997) The Theatre of Reassurance: Glenroe, Its Audience and The Coverage of Social Problems..

A Survey of Swimming Facilities in Ireland

Devereux, E; Byrne, A (1987) A Survey of Swimming Facilities in Ireland.