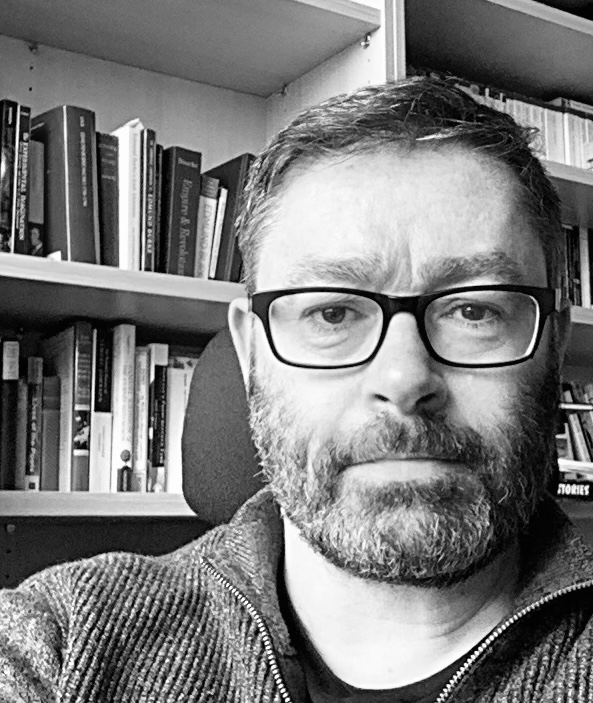 Educated at NUI-Galway (BA, MA) and at the University of Oxford, Balliol College (D.Phil.). Assistant Professor of English, Southern Illinois University (2000-2001), National Endowment for the Humanities Fellow, Keough Institute for Irish Studies, University of Notre Dame (2002-2003). Teaching at University of Limerick from 2003 to the present. Teaching and research interests include literary and cultural cultural criticism and theory; literature and enlightenment; literature and science; poetry and music; Irish studies; and utopian/dystopian satire. Has published widely on eighteenth-century studies, utopian studies, and Irish writing in English, in journals such as The Review of English Studies, the Field Day Review, Utopian Studies, Eighteenth-Century Ireland, and History Ireland. Has contributed essays on eighteenth-century Ireland to collections of essays on colonial discourse, Clare history, and Edmund Burke. Has also co-edited (with Tom Moylan), Exploring the Utopian Impulse (Oxford: Peter Lang, 2007) and (with Breandán MacSuibhne) a special edition of Éire-Ireland on Irish Catholicism. Has contributed biographical essays on John Aikin and Charles Burney to the Gale Dictionary of Eighteenth-Century British Historians. A collection of essays on Irish visual culture, co-edited with Eoin Flannery, was published by Syracuse University Press in 2009. His edition of The Selected Writings of Thomas Dermody was published by Field Day Press in 2012; a monograph, Enlightenment in Ruins: The Geographies of Oliver Goldsmith, was published in July of 2013 by Bucknell University Press (paperback 2015). An edition of the poetry of Laurence Whyte was published by Bucknell UP in 2016. A new Cambridge edition of the letters of Oliver Goldsmith, co-edited with David O'Shaughnessy of Trinity College Dublin, was published in 2018. Awarded an Augustin Hamilton Parker Fellowship at Harvard University's Houghton Library November-December 2018. Currently editing a volume of Goldsmith's poetry, as part of a multi-volume Cambridge UP edition of Goldsmith's works, for which he is co-general editor. He is also co-editor of Goldsmith in Context, a volume of essays in preparation for Cambridge University Press.

Irish Studies, Restoration and Eighteenth-Century Studies, Poetry, Poetics, Criticism and Theory; The History of the Magazine.

Between Pope and Merriman: The Poetics and Politics of R Buggin's The Inchanted Garden (1716)

Michael Griffin (2013) Between Pope and Merriman: The Poetics and Politics of R Buggin's The Inchanted Garden (1716). Eighteenth Century Ireland :11-29

Affiliated to the Future: Culture, the Celt, and Matthew Arnold's Utopia

Infatuated to his Ruin: The Fate of Tom Dermody

Utopian Music and the Problem of Luxury

The Letters of Oliver Goldsmith

The Collected Poems of Laurence Whyte

Enlightenment in Ruins: The Geographies of Oliver Goldsmith

The Selected Writings of Thomas Dermody

What d'ye call him, Tierconneldrago: Oliver Goldsmith and the Seven Years' War'

Michael Griffin (2014) What d'ye call him, Tierconneldrago: Oliver Goldsmith and the Seven Years' War'. Toronto : University Press of Toronto The Culture of the Seven Years' War: Empire, Identity and the Arts in the Eighteenth-Century Atlantic World :169-190

The Two Enlightenments of Merriman's Clare

Burke, Goldsmith and the Irish Absentees

Across Time and Space: The Utopian Impulses of Andrey Tarkovsky's Stalker

Exploring the Utopian Impulse: Essays on Utopian Thought and Practice

Da's Boat, or Can the Submarine Speak?: The Ulster Miscellany (1752) and Other Glimpses of the Irish Atlantis

Michael Griffin and Breandán MacSuibhne (2006) Da's Boat, or Can the Submarine Speak?: The Ulster Miscellany (1752) and Other Glimpses of the Irish Atlantis. Field Day Review :111-127

Storytelling in the Spectator Magazines Conference

Digitisation of an 18th Century Limerick Periodical, The Magazine of Magazines