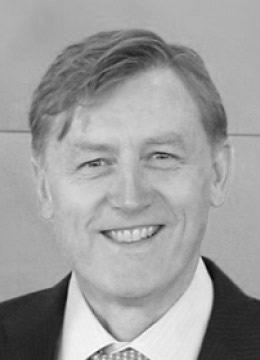 On February 11th 2016, scientists in the United States recorded gravitational waves from the collision of two black holes over a billion light years away from Earth - ripples that Albert Einstein predicted 100 years ago and that scientists had been trying to verify for over 50 years. The key element used to set the amplitude stability of the optical measurement system that recorded the discovery was an Analog Devices amplifier.

Today we honour a UL alumnus who has risen through the ranks to lead Analog Devices as its President and Chief Executive Officer. A native of Wexford, Vincent Roche graduated in 1982 from the National Institute for Higher Education, Limerick - now the University of Limerick - with a Bachelor of Science in Electronic Systems. After a period in the nascent Silicon Valley, Vincent joined Analog Devices in Limerick six years later and moved to the Norwood site in the early 1990s. In his first role as a senior marketing engineer, he created and managed several emerging analog businesses and helped to position the company in many new product categories. He was promoted to marketing director of the analog semiconductor division in 1994.

In 1996, as product line manager, Vincent led the company's development of application-specific analog products for disk drive electronics, and in 1998, he became vice president of business operations in San José, California. From 2001 to 2009, in his role as senior vice president of worldwide sales, he took responsibility for direct customer sales, distribution, e-commerce, corporate marketing and the company's industry-leading website. In 2009, he became vice president of the newly created Strategic Market Segments Group, where he focused on integrating Analog Devices technology into optimised solutions for customers. His promotion to president in 2012 brought with it responsibility for the company's entire R&D, sales, marketing and business development activities. In May 2013, Vincent Roche became only the third CEO to lead the company.

As president and CEO, Vincent Roche sets the company's strategic vision. Under his leadership, Analog Devices has expanded the breadth of its product portfolio and added new technologies and capabilities to provide more comprehensive solutions to customers' toughest technical challenges. In Vincent's own words, "The best, most innovative products we've launched over the years have been the result of collaborative innovation with our most challenging customers."

A market and technology systems thinker, Vincent Roche has leveraged these traits to navigate ADI through continuous waves of change in the world of information and communications technology. He practises the 'Theory Y' style of leadership by encouraging and motivating his people to achieve in a self-directed manner the highest standards of innovation and excellence in themselves and across all aspects of ADI's business. Combined with an affable and charismatic personality, these skills have earned Vincent his place at the top of one of the world's leading technology companies.

"Bold and fearless" are words that have been used to describe Vincent Roche, and not just in the context of business. A few years ago, he and a lifelong friend, Dr Pat Meehan of the Research Group at UL, went 'creek walking' in the Great Bear Rainforest on the Pacific coast of British Columbia with members of the Kitasoo tribe of First Nations People. In a pristine and primitive setting, the group spent 10 days looking for the elusive Kermode bear. Catching a glimpse of the bear turned out to be child's play compared to what happened next. While crossing an estuary in a small motor boat, a curious humpback whale came by and attempted to capsize the boat while aggressively blowing spray over the occupants in a manner never seen before by the Kitasoo guides. At this point, most of the occupants were frantically imagining their imminent watery demise in the bitterly cold waters. One of the party, however, saw the episode as an opportunity and proceeded to take as many photos as he could before the whale finally got bored and departed. The intrepid photographer was, of course, none other than Vincent Roche, as fearless in the wilds of British Columbia as in the board rooms of big business.

In his spare time, Vincent is an amateur biologist and anthropologist and keeps physically grounded as an active cyclist.

The University of Limerick has had a long and fruitful relationship with Analog Devices. In fact, the choice of Limerick as the location of the company's first overseas site in 1976 was strongly influenced by an expectation that a stream of NIHE electronic and computer engineering graduates would join the Raheen-based workforce. Forty years on, this act of faith has been well justified. On many occasions, the highest number of graduate employees at Analog came from UL, and a significant number of those graduates, Vincent Roche chief amongst them, have risen through the ranks of the company to hold senior positions.

Today's conferring of an honorary doctorate on Vincent Roche is our way of acknowledging his contributions to, and achievements in, the field of information and communications technology. When asked about his aspirations as CEO of Analog Devices, Vincent Roche replied that he stood on the shoulders of giants and hoped that he would leave a legacy that they would be proud of. Vincent, we have no doubt that you are already doing that and will continue to do so, and your outstanding achievements in your career thus far have certainly made your alma mater proud.