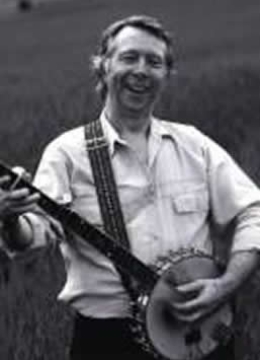 Tommy Makem has represented this country, its people, culture and traditions in concert halls across the world.  His music has been heard in the Royal Albert Hall, Carnegie Hall, Madison Square Garden, across the United States, Canada and Australia.

Tommy Makem is a multi-talented artist:  as singer, storyteller, actor, bard and songwriter, he has stirred sad and fond memories and brought a sense of Ireland, its places and pleasures, to many audiences.   Tommy Makem's early life in Keady, County Armagh with his mother, Sarah Makem, a renowned singer and folklorist, imbued him with a love of the Irish musical heritage.   He emigrated to America in 1955 and settled in Dover, New Hampshire, a place to which he has returned to live.   After a brief period as an actor, he joined The Clancy Brothers and began a successful career in music.   In 1961, at the Newport Folk Festival he was chosen, along with Joan Baez, as one of the two most promising newcomers in American folk music.  He decided to pursue a solo career in 1969 and went on to perform to sold out houses in Australia, America and Britain.   His comment on the famous folk singer, Pete Seeger, 'He could get up and play his banjo and the entire audience were all involved in everything he was doing' applies, too, to Tommy Makem.  Tommy Makem also became involved in the making of television programmes, an interest which remains a significant aspect of his professional life.  "The Road Taken", two one-hour, travel/music videos were shown on the PBS channel in America earlier this year.

In 1975, Tommy Makem and Liam Clancy began a thirteen-year partnership which proved immensely popular.  Gold and platinum albums and an Emmy nomination for a New Hampshire public television series were among the fruits of their work together

Returning to solo work in 1988, Tommy Makem continued to achieve great public acclaim for his unique ability to communicate the precious qualities of traditional folk song, what he has called "the most original, spontaneous and deep rooted expression of humanity, the first and purest form of art".   Senator George Mitchell, giving the commencement address at the University of New Hampshire in Durham in May 1998 (during a ceremony in which both Senator Mitchell and Tommy Makem received Honorary Doctorates), drew attention to the ancient bardic tradition in which Tommy Makem plays and composes:  "so many of Tommy's songs such as 'Gentle Annie' and 'Four Green Fields' are so well known that they are often mistaken for traditional folk songs".

Recognition of Tommy Makem's ability to creatively fuse folk/traditional music with a modern idiom has come from many sources.  His awards include the Honorary Doctorate of Humane Letters from the University of New Hampshire; and, in previous years, the Gold Medal of the Eire Society in Boston, the Genesis Award from Stonehill College in Massachusetts, the first Lifetime Achievement Award in the Irish Voice/Aer Lingus Community Awards and a listing as one of the Top 100 Irish Americans in the Irish American Magazine for five years in a row.   The World Folk Music Association awarded him its Lifetime Achievement Award in 1999.

Tommy Makem continues to work on behalf of Irish culture.  One of his more recent ventures, the Tommy Makem International Festival of Song was first held in South Armagh in June 2000 and is already an annual event of distinction.  Working to restore the great song tradition of South Armagh, "District of Songs", the festival offers music, song and storytelling around the heartland of Celtic legend, Slieve Gullion.   The festival's motto, 'rare lectures, lively debate, good sightseeing and great craic' is presented in a context that seeks, in Tommy Makem's words, "to help rekindle the spiritual dimension of humanity" beside "the most mystical mountain in Ireland".

In a poem entitled 'Ireland' Tommy Makem speaks of the lyrical beauty and historic profundity of the heritage and landscape of this country:

A shimmering emerald eye
Piercing the blue Atlantean sweep,
Ever looking westward
To the great Bower of Sol.
A beacon; a seductive siren;
A rock of time.
Luscious; verdant; fertile;
Coursed by the three great waves,
Cliodna, Ruari, and Toth.
Land for poets; land for heroes;
A Dagda's Cauldron of light.
This Banba; This Fodhla; This Eriu;
Eternal, many splendoured Ireland.

Through his continued creative energy and rich repertoire, Tommy Makem has taken Ireland to the world.