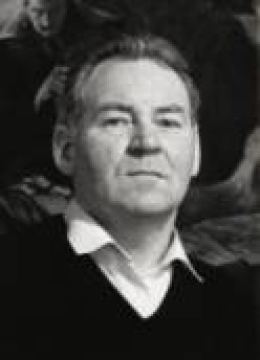 As artist, designer, medallist, member of various prestigious national and international bodies in his areas of expertise, Thomas Ryan has made an enormous contribution to the well-being of the nation.  He is one of our leading portrait painters: Presidents, Cardinals and University Chancellors; Taoisigh; Archbishops, Provosts and University Presidents, including our own, and the Planning Board of this institution have been captured for all time by his dispassionate eye and steady hand.  His landscapes and townscapes have mirrored the changing face of modern Ireland: among these his paintings of his native Limerick have their own important niche.

Very early in the life of this University he was called upon to exercise another of his talents; to design the Chairman's Gold Medal, awarded at each annual Conferring to the outstanding graduating student of the year.  He produced a very beautiful design based on one of the misericords from St Mary's Cathedral.  Equally fine was his 1989 design for the University of Limerick Mace, its crenellated head climaxed by the figure of St. Munchin, patron of learning and of his native city.  He has also designed the Fifty Pence coin issued to commemorate the Dublin Millenium and the current One Pound coin.  Less known to the general public is his reputation as an expert on medals, particularly Irish medals issued over the centuries by various official and semi-official bodies.

But apart from his work as a full-time practising artist, he has given freely of his knowledge and experience to many bodies here in Ireland and in Europe.  Abroad he is a member of governing bodies of academies and cultural institutions in England, Scotland, Italy and Spain.  These include the Royal Academies in London and Edinburgh, the Union of European Academies, Madrid and the British School at Rome.  To focus on just one of the Irish institutions which has benefited greatly from his advice, the National Self-Portrait Collection is deeply indebted to Thomas Ryan for the robust and commonsense policies for its development which he advocated when it was still in swaddling clothes.

But his greatest contribution to an Irish institution is undoubtedly that made to the Royal Hibernian Academy.  An Associate from 1963 and a full Academician from 1971, Thomas Ryan was elected President of the RHA in 1982 at a most difficult period in its history.  The construction of a new Gallery had begun in 1972 through the generosity of Matthew Gallagher.  However his death and the difficult economic climate in 1973 brought to a halt the building of the RHA's new home.  But in 1984, two years into Thomas Ryan's presidency, the RHA was able to hold its first exhibition, that of the GPA Awards for Emerging Artists, in its own Gallery.  The following year, on 19 June 1985, the President of the RHA had the great joy of hosting the Opening of the RHA's 156th Annual Exhibition in its new home, the first time that this event was held in its own building since the burning of the Academy's premises in Abbey Street in 1916 - with all of that year's Annual Exhibition inside.  A bare recital of the facts which saw the creation of the RHA Gallery as it is today cannot indicate the enormous amount of painstaking work, diplomacy, fund-raising skills and unremitting attention to a myriad range of detail that all of this entailed.  Like the work of Thomas Ryan in all his avocations, this achievement required constant thought, thorough examination of the possible and confident completion within the limits set.

And borrowing a line from Sir Christopher Wren, Thomas Ryan could (though he is much too modest and private a man to do so) stand at the top of the splendid staircase of the RHA Gallery, look around him at the best art exhibition space in Ireland and say, sotto voice "si monumentum requiris...".