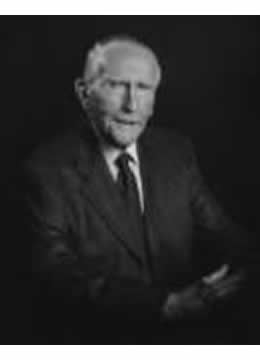 Mr Ted Russell, a life-long citizen of Limerick, has made a singular contribution to his city, this university, the Shannon Region, and Ireland throughout a lifetime of private endeavour, public service, and unwavering dedication to the principles that have guided him over the past 90 years.

George E (Ted) Russell was born into a noted Limerick family and was educated in schools and colleges in Ireland and England before joining the family business and engaging in a successful career in the baking, retail, milling, and mining sectors.  He oversaw the development of significant enterprises such as the Silvermines Group, National Food Ingredients, and Dan O'Connor Limited among others.  But his business acumen and achievements represent but one outstanding facet of the man.

Ted Russell has combined his commercial activities with a comprehensive engagement with the welfare of all humanity.  This has required him to be a man of vision and action in many realms: spanning politics, regional development, education, community service, and philanthropy.

When receiving an award last year, Mr Russell spoke of his political involvement, saying: "It took a lot of time, and sacrifices had to be made, but I felt right being involved to such an extent in Limerick city.  My wife Derry was, and still is, a tremendous support to me".  This approach, with its strong commitment both to public service and family alike, has informed an illustrious political career which encompassed repeated election to Limerick City Council (1942-79), the Mayoralty on 5 occasions, Dáil Éireann (1957-61) as Limerick's first Independent deputy, and Seanad Éireann (1969-77).

Ever conscious of his official responsibility not only to the present but to history itself, during one of his terms as Mayor, Ted Russell undertook to have a memorial dedicated to the memory of Limerick Mayors O'Callaghan and Clancy, and to other patriots who also lost their lives during the War of Independence. To this end, he proved to be an intrepid fund-raiser, travelling to the United States to garner support (and bringing with him distinctive tokens of appreciation in the form of five cured hams from the flourishing bacon industry in Limerick). In due course, he saw to it that an appropriate memorial was erected at Sarsfield Bridge.

Mr Russell may be described as both a local and a national treasure in respect of his many good works with a wide range of sporting, community, cultural and charitable organisations. Exemplifying this dedicated volunteerism, Ted Russell has variously led, supported, facilitated, guided, and inspired many groups, campaigns, and institutions. These have included his chairmanship of the Cancer Association of Ireland (1950-61) where he spearheaded national efforts to provide diagnostic, treatment, and research facilities across Ireland; membership of the Mid-Western Health Board (1971-79); a lifelong association with Bohemians Rugby Football Club; and, in a predictably unheralded manner, service with the St Vincent de Paul Society, to name but a very few. His philanthropic spirit further manifested itself in the donation of land for a public park at Barrington's Pier.

Ted Russell's involvement in the sport of rugby perhaps uniquely typifies his generous approach to public service.  After a distinguished career which saw him play and captain Bohemians RFC, and then gain a regular place on the Munster team and trial for Ireland, he has continued his association with Bohemians over some 70 years.  He was a strong voice of support and encouragement when the amalgamation with the University of Limerick club was negotiated; and he has backed up this support through regular attendance at UL/Bohs games to the present day.

Another public body to which he has given exemplary service is the Limerick Harbour Commissioners - which he chaired for 26 years and of which he was a member for over half a century, overseeing major developments in Limerick Docks and the Shannon Estuary - contributions which resulted in the creation of an international class deepwater port, and led to the Commissioners dedicating the floating dock in Limerick as Ted Russell Dock.

It is especially noteworthy on this occasion to remember that Mr Russell played a key role in re-activating the drive to establish a university in Limerick during his tenure as Mayor in 1957. To this end, he drew together and rallied those who were locally interested, and he met with presidents of existing Irish universities and with the then Taoiseach, Mr Éamonn de Valera, to advance the cause. The resultant establishment of the Limerick University Project Committee in 1959 then led to the development of NIHE Limerick, which initiated the campus development here at Plassey.

The extraordinary depth and breadth of Ted Russell's contribution to public life in this city, region, and nation can in part be gauged by the many accolades that he has received:  the most treasured of which was the Freedom of Limerick City that was bestowed upon him in 1995.  Through it all, those who have known and interacted with him attest to his character, integrity, vision, and indefatigable zeal for his beloved Limerick.

In keeping with Woodrow Wilson's dictum that "there is no idea so uplifting as the idea of service to humanity," all who have witnessed the works of Ted Russell must be inspired by his steadfast dedication to public service; and today we acknowledge a remarkable individual's contribution to the betterment of the lives of those past, present, and to come.