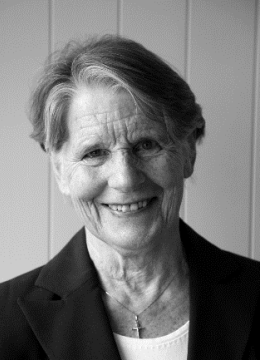 Sister Stanislaus Kennedy often invokes the Prayer of Serenity, written by the American theologian Reinhold Niebuhr, to explain her philosophy on life: “God, grant me the serenity to accept the things I cannot change, courage to change the things I can, and wisdom to know the difference.” This subtle yet profound prayer perfectly captures the essence of Sister Stan’s approach to the world – it encapsulates both her ferocious desire to build a fairer society and her belief in the power of faith as a guiding force.

A member of the Religious Sisters of Charity since 1958, Sister Stanislaus Kennedy has devoted her life to campaigning fearlessly and tirelessly on behalf of the most vulnerable people in Irish society. Whether as a crusader against homelessness or an advocate for immigrants, Sister Stan has been at the heart of Ireland’s social evolution for more than six decades.

It is often said of Sister Stan that she is endlessly willing to champion difficult causes, no matter how deeply entrenched, simply because it’s the right thing to do. Former President of Ireland Mary McAleese wrote that Sister Stan has trodden paths in life that are “unfamiliar, difficult to navigate, and strewn with obstacles”. She has done so even when the odds seem insurmountable and her opponents appear all-powerful. Guided by faith, compassion and an extraordinary relentlessness, she has taken on governments, challenged taoisigh and even rebuked elements of her own church, always in the service of those who need help.

Sister Stan has been many things – an author, an academic, an advisor to governments and a founder of numerous charitable organisations. She has inspired countless people and been a true driver of change. Furthermore, she has always maintained an absolute respect for the marginalised and an unwavering belief in the great commandment to love one another.

Sister Stan’s fidelity to the cause of what is right is a trait that can be traced back to her youth. Born Treasa Kennedy, she grew up as one of five children in the village of Lispole, just outside Dingle in County Kerry. Sister Stan is very much a product of her country upbringing and has spoken of a happy childhood spent in the lakes and fields of the Kingdom, a place she describes as “the most beautiful in the world”. Even as a child, young Treasa Kennedy was alive to the inequalities in her society and became determined to do something about it. At 18 years of age, she joined the Religious Sisters of Charity in Dublin, an order established by Mary Aikenhead in 1815.

Sister Stan has said that her initial decision to become a nun was fuelled primarily by a desire to help tackle poverty. In those days, such a vocation was not readily available to most young women, but she knew she could make a difference through the church. In the convent, she entered a world defined by rules and order after a childhood spent roaming free in nature. It was not always an easy transition. While she has spoken of some difficult moments, she never lost sight of her mission, and her faith grew even more after she joined the Sisters.

In 1960, Sister Stanislaus Kennedy’s career as a “social innovator” began in earnest when she was sent to Kilkenny to develop the Kilkenny Social Services. Working alongside Bishop Peter Birch, she pioneered a new way of delivering social services, which would later be adopted right across the country. Even then, Sister Stan possessed a charisma that gathered people to her, and she became a central figure in the development of an active social policy in Kilkenny. In 1974, the government appointed her as the first chair of the National Committee on Pilot Schemes to Combat Poverty.

During her time in Kilkenny, Sister Stan learned the importance of speaking truth to power. She is not satisfied with a world where poverty and injustice are endemic, and she has always sought to confront social problems at their roots rather than just treating their effects. She has raised her voice even when many would have preferred her to stay silent, and her candour has sometimes come at a personal cost.

Back in Dublin in the 1980s, Sister Stan took on one of the country’s biggest problems: homelessness. After enrolling as a senior research fellow at University College Dublin, she began investigating the causes and effects of homelessness on young women. What she unearthed changed how homelessness was viewed in Ireland and helped start a national conversation on the issue. In 1985, she founded Focus Ireland – now the country’s largest voluntary organisation fighting homelessness. Built on the principles of compassion and empathy exemplified by Sister Stan, the charity has helped an immeasurable number of people down through the years.

In 2001, having identified immigration as a growing social issue facing the country, Sister Stan established the Immigrant Council of Ireland to provide support to people entering the country. Today, the council has helped more than 120,000 people from migrant backgrounds to find their way in an increasingly diverse Ireland.

Sister Stan has been a colossal presence in Irish society throughout her working life. Despite never shying away from a battle that needs to be fought, she has always firmly believed in the power of stillness, of a quiet moment in a noisy world. In 1998, along with her lifelong friend Sister Síle Wall, she co-founded The Sanctuary, a spirituality centre in the heart of Dublin city where people can find space and time to explore their inner world. In 2020, Sister Stan and Sister Síle co-published a collection of meditations stemming from their lives in The Sanctuary. Now in her eighties, Sister Stan is still communicating her message to the world – she even maintains an active Twitter page to send out messages of positivity to her followers.

Sister Stanislaus Kennedy has never stopped striving on behalf of the oppressed, never stopped believing in the power of faith and never compromised on the idea that a better world is worth fighting for. She has made an inordinate difference to the lives of countless people, and she has changed Irish society for the better. It is for this that the University of Limerick honours her today.

Chancellor, I present to you Sister Stanislaus Kennedy and ask that you confer upon her the honorary degree of Doctor of Letters.