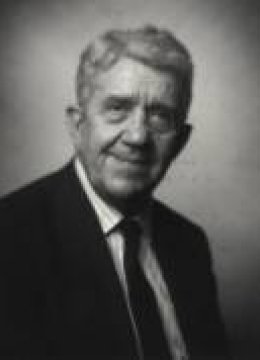 Sir Bernard Crossland is an engineering educator who is an enthusiastic advocate of very strong links between industry and education and the integration of education and training.  He is well qualified to promote these views from a lifetime of commitment to them.

Sir Bernard's family history shows that he comes from a long line of hands-on engineers who started, like himself, as an apprentice.  He was lucky on leaving school to become an engineering apprentice at Rolls-Royce in Derby in 1940 and received his engineering education mainly through part-time study.  In 1943 at the age of 19 years and 8 months, he was awarded an honours Bachelor of Science in Engineering degree.  In 1947 he was awarded a Master's degree for work on the Axial Vibration of Crankshafts, and in 1953 he was awarded his PhD from the University of Bristol for a thesis on the Effect of Pressure on the Shear Strengths of Metals.  Thus started Sir Bernard's research and teaching interests in vibrations, high pressure engineering, explosive welding and fatigue.

Sir Bernard has received an enormous number of awards in recognition of his exceptional service to his discipline of Mechanical Engineering, his profession as educator and his service to the community and industry.  He became a Fellow of the Royal Society in 1979, was Senior Pro-Vice Chancellor of Queen's University, Belfast from 1978 to 1982 and President of the Institution of Mechanical Engineers from 1986 to 1987.  His Presidential address to the Institution with the title Engineering Education for Fitness for Purpose in October 1986 stressed that the essential objective of engineering education and training should be designed for profitable manufacture.  He suggested that the objective of undergraduate education is to educate and train people to think and search out knowledge for themselves and to have the self-assurance to apply it to the job in hand.  Underlying all this he believes firmly in the need for strong links between industry and engineering education at all levels and in the intellectual challenge arising from these relationships.