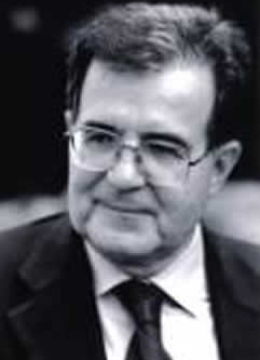 e are here today to honour Professor Dr. Romano Prodi. We do so because Dr. Prodi has reached the highest levels of professional attainment in four challenging areas....... as an academic, a politician, a business person, and an international public servant and statesman. He has woven, successfully, each of these professional activities together - one enriching the other - and the result has been a rich tapestry which has, is and will in the future be of immense benefit to the European member states, to Europe, and to the wider global environment.

Romano Prodi was born in Scandiano (near Reggio Emilia) in Italy in 1939. He is the eighth of nine children, seven of whom - including himself - went on to be lecturers. He married Flavia Franzoni in 1969 and he and his wife have two sons, Giorgio and Antonio.

Romano Prodi studied at the Catholic University of Milan, where he took a degree in Law, with distinction in 1961. He presented a dissertation on protectionism in the development of Italian industry. He went on to specialise at the Universities of Milan and Bologna, and at the London School of Economics. He became a visiting professor at Harvard University and at Stanford Research Institute. His academic career began at the Department of Economics and at the Faculty of Political Science of the University of Bologna, where he worked as an assistant professor (1963), associate professor (1966) and professor (1971 to 1999) of industrial organisation and industrial policy.

While lecturing in his specialist areas, he also engaged in an active research programme. This programme, initially, was in two areas which have since become mainstream topics in industrial economics: the development of small and medium-sized enterprises and industrial areas. His Modello di sviluppo di un settore in rapida crescita: L'industria della ceramica per l'edilizia which was published in 1966 and charted the rapid growth of the heavy clay products industry was one of the first studies of its kind. His treatise on antitrust policy, Concorrenza dinamica e potere di mercato, published in 1967, was equally distinguished. In the international academic research literature, his name features alongside Giacomo Becattini, Franco Momigliamo, and Paolo Sylos Labini, all of whom were among the founders of the Italian school of industrial economics.

The young Romano Prodi's academic interests were broadening as time went by. He developed a keen research interest in several areas which were to come to international and inter-governmental prominence in later years....for instance the relationship between the State and the market, privatisation policies, the key role played by education systems in promoting economic development and social cohesion, the process of European integration and, following the collapse of the Berlin Wall, the dynamics of different capitalist models. His Il capitalismo ben temperato (1995) and Un'idea dell'Europa (1999) sum up his thinking in these fields.

While developing his academic career and internationally prominent research interests, Romano Prodi was also developing very important business interests. From 1974 to 1978 he was chairman of the publishing house Società Editrice Il Mulino. In 1981 he founded Nomisma, one of the leading Italian economic consultancies. From 1982 to 1989 he was Chairman of the major Institute for Industrial Reconstruction (IRI), at the time Italy's largest holding company. Under his chairmanship, IRI underwent far-reaching reorganisation, and embarked on a process of industrial re-organisation preparing its subsidiaries for privatisation. In 1993 he was called back to the helm of IRI and successfully saw through the privatisation of large companies like Credito Italiano and Banca Commerciale Italiana.

During all of this, Romano Prodi found the time to write prominent and challenging editorials for the main Italian newspapers, such as Il Corriere della Sera and Il Sole 24 Ore. He was, also, for many years, editor of the journal L'Industria-Rivista di economia e politica industriale.

It is not surprising that a man with all these interests and professional attainments should have been invited to join, and be interested in joining, in the political development of his country. His politics have always been left of centre. From 1978 to 1979 he was Industry Minister. In 1995 he founded the Ulivo centre-left coalition, which appointed him as its candidate for the premiership or prime minister of the Italian Government. At the April 1996 general election the Ulivo won victory over the centre-right coalition, and in May 1996 the President of the Italian Republic invited Romano Prodi to form the new Government of Italy. Having obtained the vote of confidence from both Houses of the Italian Parliament that same month, the Prodi Government remained in office until October, 1998. It is renowned for many achievements, one of which was to secure Italy's place in the first group of countries adopting the Euro.

The International Public Servant and Statesman:

negotiations with the ten new applicant countries for membership of the European Union were concluded, with the accession of these countries scheduled for 1 May 2004;
there has been the successful launch of the Euro and continuing management of the Stability and Growth Pact
progress has been achieved on the creation of a common foreign and security policy for the European Union, which should see the creation of an EU Foreign Minister before the end of year 2004;
there have been several important initiatives in the fields of justice and home affairs which relate to immigration, asylum, refugees, tackling international crime and drug trafficking, and the establishment of Europol;
the Lisbon Strategy agenda, which is designed to make the European Union the most competitive economy in the world by the year 2010, has been developed and monitored;
many innovative ideas have been contributed to the Convention on the Future of Europe which has culminated in a draft constitutional treaty.

Paralleling all of these major dimensions, built successfully into just one man's career and professional life, there was, and is, also Romano Prodi the person........humourous, human, personable, warm, and with a wide array of "ordinary" human interests. While unable to visit the cinema frequently now, he is still an avid follower of film. He is a dedicated reader of classical and modern literature...... Dostoievsky, Tolstoy, and Shakespeare having been among his earlier favourite authors. He studied music in his earlier years and loves listening to it; Bach, Beethoven, Vivaldi, and contemporary Italian music plus the Beatles music are amongst his favourites. He says disarmingly that when he works at home he always puts music on, but not in the office!  And he prefers the bustle and art possibilities of city living, such as in the Piazza Maggiore in the heart of Bologna, to the countryside. In short, Romano Prodi, notwithstanding all his high accomplishments, is an all-rounder, and "one of the people".

It is to be expected that a person with the wide range of interests and accomplishments of Romano Prodi would be widely recognised and honoured internationally. And this is so in abundance in the case of President Prodi. He was made an Honorary Fellow of the London School of Economics and Political Science in 1989, and an Honorary Member of the Real Academia de Ciencias Morales y Politicas, Madrid, in 1997. He has been awarded over twenty honorary degrees and doctorates from prominent and leading universities and educational institutions in Europe (European Union and Eastern Europe), India, the United States, Canada, Africa and Asia.

Romano Prodi is simply an amazing person. He is multi-faceted, effective over a wide array of different professional areas, and is "driven" to succeed. He has woven successfully into one fabric all that is best from academia, from business, and from politics. He has not yet reached his zenith in terms of what he can and intends to contribute to his native country, Italy, and to the international community. May he have every success and happiness in pursuing his destiny. For many years to come, Europeans and persons operating in the wider global environment, will benefit from his idealism, his dedication, his commitment and his accomplishments. It is for all these reasons that the University of Limerick, today, honours Romano Prodi by awarding him an Honorary Doctorate in Laws.