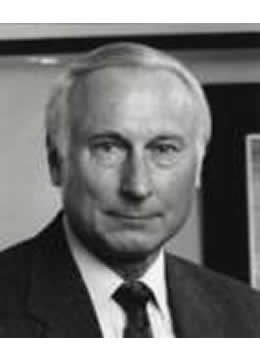 It is a great honour for me to present Ray Stata, Chairman and Chief Executive of Analog Devices, to you.

If you want to find out anything ... about the methods they use,
I advise you to stick closely to one principle.  Don't listen to their
words, fix your attention on their deeds.

While these words originally referred to theoretical physicists, I have found them useful in approaching the task of distilling the richness of Ray Stata's achievements into this brief citation.  Perhaps Analog Devices employees might be advised to listen to his words as well.

Ray Stata grew up in Oxford, Pennsylvania, where his father ran an electrical contracting business.  Ray overcame the temptation to join the family firm and so moved from Oxford, Pennsylvania to Cambridge, Massachusetts.  He completed his studies in MIT in 1958 with a Masters Degree in Electrical Engineering.  After graduating, he spent a short two years with Hewlett Packard.  However, this experience was important in that the employee-centred, engineering excellence, learning company philosophy of Hewlett Packard was to become the mode for the as yet unborn Analog Devices.

An entrepreneur at heart, Ray Stata and his MIT classmate Matthew Lorber, in the best traditions of electronics industries even today, set up Solid State Instruments in the basement of their apartment building, making devices for testing gyroscopes.  The major success of this venture was that they sold the company to Kollmorgen Corporation and eventually used the money accruing from the sale to start Analog Devices in 1965.  They had by now identified a market opportunity for amplifiers.  State of the art amplifiers and the design of analogue circuits were to become the core competencies of Analog Devices for the following two decades.  Once more the basement of the apartment building was called into action.

The early years were lean years for Matt and Ray.  However, Maria, Ray's wife was working as a schoolteacher at that time, and this helped.  In 1969 Analog Devices under Ray Stata's leadership went public.  Matt Lorber left to pursue other ventures.

Ray Stata became chief executive and realised that business is more than products and marketing - that the hard part is building an organisation where the essence is the human side, attracting and motivating people.

Creating the resources the company needs begins with attracting, retaining, and developing analog designers, who are an increasingly rare breed in a mostly digital design world.  So first the words : Ray Stata co-authored two books with James Botkin and Dan Dimancescu, Global Stakes and The Innovators, which amongst other things stressed that the continued development of the US high technology industry depends on a supply of well-trained engineers and computer scientists.  These ideas where summarised in the aptly titled article High Technology, Higher Education, and High Anxiety.  These words also stressed the need for substantial government support for high technology education.

A deed was the establishment of a number of Analog Devices engineering chairs in universities, including MIT and the University of Limerick.  Ray also helped establish the Massachusetts High Technology Council which asks its members to contribute 2% of their research budgets to colleges.

Analog Devices flourished through the 1970s, providing the resources to finance new start-up ventures.  Thus Analog Devices commenced operation in Limerick in the spring of 1976 with a team of 12 people.  It was to be a start-up with a difference because unlike other off-shore investment into Ireland at that time, Analog was to build Ireland's first Wafer Fabrication facility.  Analog also established Ireland's first IC design centre along with a world-wide marketing operation.

Just one year later in Limerick they were producing their first silicon wafers in a facility employing over 100 people.  By 1979, the Irish division had doubled in space, more than doubled its employment level to 250 and had introduced Limerick-designed new products on Limerick-designed process technologies.  By 1983, the division had again doubled in terms of both employment levels and plant size.  It also recorded continuing success in terms of new products and processes.  Some of these products featured on the front page of the prestigious international trade magazine Electronic Design.  By 1986, the division had grown to its current size, 10 times the size of the facility in 1976, and employing 650 people.  In 1994, the company now employs over 850 people, approximately 250 of whom are third level graduates.  This year also saw the announcement of the construction of a new sub-micron Wafer Fabrication facility.  This major new investment is a tangible testimony and a clear vote of confidence to the future of Analog Devices in Limerick.

When Analog's investment in Ireland was first proposed in 1975 it did not meet with the approval of the majority of the Board at that time.  In fact, the only two people supportive of the idea were Ray Stata and the executive in charge of their fledgling CMOS business, Hank Krabbe, who was later appointed Managing Director.

Ray Stata wrote The Role of the Chief Executive Officer in Articulating the Vision in 1988, in which he says ... in the broadest sense, the major responsibility of the CEO is leadership, and strategic planning is a tool to facilitate the exercise of leadership.  Strategic planning provides a vision of what you want to become, a way of describing the end state towards which you are journeying, and then the process for getting there.

He says at the end of the article Whether or not we meet the plans as originally conceived is not as important as making sure we are heading in the right direction, since strategic planning and implementation constitute a process, not an event.

Perhaps the greatest value of the strategic planning process is that it allows us, both individually and collectively, to gain control of our destiny.  With this process firmly ingrained in Analog Devices, we now have a culture where people believe that we can set aggressive goals and make them happen.

Analog Devices through the last decade has experienced a triple (at least) revolution, namely a focus on organisational learning, the adoption of a total quality philosophy and a technological repositioning of the Company.  Ray argues that the rate at which individuals and organisation learn may become the only sustainable competitive advantage, especially in knowledge-intensive industries, and that consequently people are the only truly competitive edge of the future.

When Ray Stata puts pen to paper, for the general reader his contribution is concentrated and focused.  One is tempted to quote him in full because anything else seems inadequate.  In addressing the consequences of this philosophy in a company which had a strong bias towards divisional autonomy, corporate-wide team work was necessary.  To quote again If teamwork was our goal, then other virtues had to be emphasised.  We tried to capture the essence of these virtues in the concepts of Openness and Objectivity.  By openness, we mean a willingness to put all the cards on the table, eliminate hidden agendas, make our motives, feelings and biases known, and invite other opinions and points of view - thereby engendering trust in relations between people.  By objectivity, we mean searching for the best answers based on reasoned positions and objective criteria, as opposed to political influence and parochial interests.  We also mean making judgements based on facts, not opinions or rumours.

With respect to quality, Ray co-founded the Centre for Quality Management in Boston and locally Analog Devices is a strong supporter of the National Centre for Quality Management at the University of Limerick.  In the company the deed was the implementation of a strong Quality Improvement Programme with very aggressive goals both for product quality and meeting customer needs.  In 1994 Ray Stata was invited to serve on the Malcolm Baldrige Quality Award Board of Overseers.

Looking at Analog Devices today one sees a very successful and profitable business based on the standard, traditional analogue products for data acquisition and control.  Building on this is a new digital technology, software and digital signal processing business manufacturing products for high volume, low margin applications in multi-media, PCs and telecommunication.  The message might be : make the products accessible to the customer and user, both technically and in terms of price.

In short, we have in Ray Stata an industrial philosopher, a chief executive who is constantly reviewing his role and designing and leading his company.  He is a devotee of continuous learning and an avid reader over a very wide range of interests.  This broadness of view has been recognised in his three previous Honorary Degrees which are in Engineering, Business and Humane Letters.  Thus for his contribution to applying systems thinking to enterprise, his support of engineering education both in the USA and in Ireland, for his act of faith in establishing a flag-ship project in Limerick in which we take enormous pride, President, I present Ray Stata to you and request you to confer upon him the honorary degree of Doctor of Engineering.