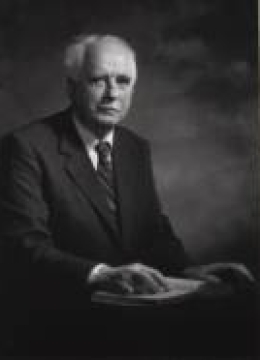 It is fitting that the University of Limerick should honour Paul Quigley, distinguished public servant, businessman and in a real and practical sense, patriot.  In his career, in his public and in his personal life he has always pursued and has created development - at regional, national, and international levels.  He has done this on the basis of personal service, commitment, and dedication from himself, and the motivation of idealism and commitment in others.

Paul Quigley was born in 1923 and qualified with an honours degree in Civil Engineering at University College Dublin in 1942 when he was 19.  But even before that his sense of service to society and to the nation came to the fore.  He interrupted his university studies and enlisted in the Irish Army in 1940.  After basis training, he was released to continue his engineering studies; on qualification, he returned to the Army.  He was commissioned, assigned to the Corps of Engineers, and posted to the School of Military Engineering.

During his years with the School, he developed a lasting interest in education, an interest which was to manifest itself in various forms throughout his distinguished career.

There followed a series of important appointments which spanned over 40 years and which saw him contribute to corporate, to regional, and to national development in many different ways.

Paul Quigley joined Irish Ropes in 1946 and during the next 7 years pioneered the first applications of both scientific management and work study in Ireland.

In 1953 he became the first Director of the newly formed Irish Management Institute and held this position until 1960.  Under his management and direction, the IMI's position in Irish business life was developed and consolidated.  Its premises were acquired, changed, and enhanced; its operational style of annual management conferences and management development courses was created and took shape; its important Management journal was launched.  In short, the foundations of the Irish Management Institute were firmly established and the operations of the Institute were launched soundly by his vision, his zeal, and his commitment.

From 1960 to 1985 Paul Quigley devoted his professional career to the Shannon Free Airport Development Company - first and early on as General Services Manager, and then as General Manager for over 24 years.  His talents, sense of public service, and sheer professionalism knew no bounds in this role.  Innovative development in the Shannon and Mid West Region; targeted developments in tourism and for small, medium, and large industry; the linking of aviation, tourism, and town building; cooperative endeavour for regional development; industrial and clustered industry linkages - all of these and many more were carefully orchestrated by the man, Paul Quigley, who could and did - with seeming consummate ease - operate at the regional, national, and international levels, but always to a clearly focused goal.

Paul Quigley was then, and is, a man of vision, of leadership, and of service.  It is not surprising that a man with these qualities was asked to take on other public and international tasks.  He served as Chairman of the National Institute for Higher Education, Limerick, as Chairman of AnCO (now FÁS), the Industrial Training Authority, as a member of the Public Service Advisory Council; and he undertook many consultancy assignments for agencies of the United Nations in fields as far apart as Iran, Sri Lanka, Egypt, and Costa Rica.  One could give details of the important contribution made by Paul Quigley in each of these roles; suffice it to say that his contribution shaped, for the public good, the destiny of all those activities with which he was associated.

In honouring Paul Quigley today, we honour a man who has contributed much to our society, and to the economic and social well-being and welfare of our country.  It is fitting that the University of Limerick should honour this man by awarding him an Honorary Doctorate of Economic Science.