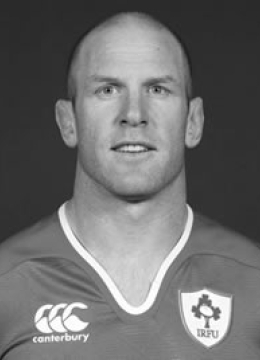 As described by himself, Paul O'Connell's training schedule sounds demanding by any sportsperson's standards: six o'clock to eight every midweek morning, six to seven every midweek evening, nine to eleven Saturday mornings and eight to ten Sunday mornings. And not a rugby ball in sight - this was Paul's swimming regime as a primary schoolboy in the 1980s!   By the time he started secondary school in Ardscoil Rís, Limerick, Paul O'Connell was a champion under-age swimmer. During his early to mid-teens, golf took over as his main sport, and as a youth with Limerick Golf Club, he got down to single figures. By his own admission, he then hit a wall; while some of his contemporaries got their handicaps down to 1 or 2, Paul's handicap remained static at 4.

Paul O'Connell did not encounter too many walls that he could not get through in his next sporting passion - rugby. Having played under-10 and under-12 rugby with Young Munster RFC, Paul did not play the game again until Transition Year, and only after a significant amount of arm-twisting from the school's rugby coach. While the learning curve was steep, it became apparent very quickly that he had a special talent for the sport, and within two years he was playing schools international rugby. The commitment and dedication he brought to the game came from those hours of training and competition in the swimming pool, and that would stand to him in schools rugby and throughout the rest of his remarkable career.

After rising through the amateur ranks with Young Munster in the All Ireland League, Paul O'Connell made his debut for Munster against Edinburgh in 2001 and for Ireland against Wales in the 2002 Six Nations championship. In a totally unscripted turn of events in the 2015 Rugby World Cup in Cardiff, he played his last match for his country against France in Ireland's final pool game of the tournament, at which time he was Ireland's third most-capped player and the joint-thirteenth most-capped international player in rugby union history. As events transpired, his injury-enforced retirement from the World Cup at the pool stages brought his planned retirement from international rugby forward by only one match. The World Cup marked the end of the glorious international career of one of the best second rows in the world and one of the most influential rugby players this country has ever produced.

The highlights of Paul O'Connell's career are staggering. Since debuting for Ireland in 2002 until his final match in the 2015 World Cup, he played for his country 108 times, captained the side 28 times and scored eight tries. He was part of the Ireland team that won the Triple Crown in 2006, 2007 and 2009, the Six Nations Grand Slam in 2009 and the championship in 2014 and 2015. He was selected in the squad for the 2005 British and Irish Lions tour to New Zealand and won his first Test cap for the Lions in June 2005. He played for the Lions seven times in total and for Ireland in four Rugby World Cups. In 2006, he was the only northern hemisphere nominee to be shortlisted for the International Rugby Board Player of the Year.

An instinctive and inspirational leader, O'Connell captained Ireland for the first time in the 2004 Six Nations against France in Stade de France. En route to Ireland's 2007 Triple Crown win, O'Connell captained his country on February 11th against France in the historic, first-ever rugby match played at Croke Park and was Man of the Match two weeks later against England at the same venue. He played for Ireland in the 2007 Rugby World Cup, and two years later was selected as the British and Irish Lions captain for the 2009 tour to South Africa. Following two more seasons for Ireland in the Six Nations championship, he was selected yet again to represent his country at the 2011 Rugby World Cup in New Zealand and was awarded Man of the Match in Ireland's opening match of the tournament against the USA. When he was appointed captain of Ireland for the 2012 Six Nations campaign, O'Connell, with typical modesty, declared that "the greatest ambition in a player's career is to play for your country, so to captain Ireland is a huge honour for me". The man he replaced as captain of Ireland, Brian O'Driscoll, recently declared O'Connell as "one of the greatest leaders and players of them all. Inspirational".

In April 2013, O'Connell was named in the squad for the 2013 British and Irish Lions tour to Australia. In the absence of the injured Sam Warburton, he captained the side to a victory, and scored a try, in the opening tour fixture against the Barbarians. A year later, O'Connell led his country to another Six Nations championship, captained Ireland to victory in the two-test tour to Argentina and captained the side in the Guinness Series against South Africa, Georgia and Australia, again being nominated Man of the Match in that final match.

O'Connell continued his captaincy of Ireland throughout the 2015 Six Nations campaign and won his one-hundredth cap against Wales on March 14th. In the final match of the tournament against Scotland a week later, he scored his seventh international try and led Ireland to a second consecutive Six Nations championship win. Fittingly, O'Connell was named 2015 RBS Player of the Championship and Guinness Rugby Writers Player of the Year.

Beginning one year before his international career got underwayprovincial career will go down in history as one of the greatest ever. Debuting for his beloved Munster in 2001 in a Celtic League match against Edinburgh, he played his first European Heineken Cup match for the Red Army against Castres later that year and played for Munster 178 times in total. During his time with the club, Munster won the Celtic League/Pro12 in 2003, 2009 and 2011, the Celtic Cup in 2005 and the European Heineken Cup in 2006 and 2008. O'Connell succeeded Anthony Foley as captain of Munster in July 2007 and went on to become the club's most successful captain of the professional era.

Paul's association with the University of Limerick dates back to his use of the old 33-metre pool in his competitive swimming days as a schoolboy. After leaving school, he studied computer engineering at UL for three years before turning professional in 2001. During his first year at UL, Paul captained the college's intervarsity Freshers' rugby team to win the much sought-after O'Boyle Cup in Thomond Park. Unfortunately UL had to replace the cup after it disappeared mysteriously during the celebrations that night. So Paul, as well as honouring you here today for your phenomenal rugby career, we'd like to ask you one question: Where is that cup?

It is fair to say that Paul's work in recent years with the University of Limerick Foundation has more than compensated us for the fact that he might have let some silverware slip through his fingers during his time at UL. He has been a director of the Foundation since 2011. In that role in 2012, he gave generously of his time to front the Paul O'Connell Golf Outing, which raised in excess of €50,000 to fund scholarships for students participating in UL's Access Programme. The scholarships enabled six students from socio-economically disadvantaged areas of Limerick to study degree programmes at the University. In addition to his philanthropic work with the UL Foundation, Paul is involved in a number of national and local charities and volunteer initiatives, including Special Olympics, Haven and Team Limerick Clean-up. Epitomising all that is good about Limerick, he was awarded the Freedom of the City in April 2012 and was an ambassador for Limerick City of Culture 2014.

Paul, as a familiar figure on campus with Munster Rugby and as a director of the UL Foundation, you have been a long-time friend of the University of Limerick, and today it gives us great pleasure and pride to honour you for your exceptional achievements in rugby. You are one of the country's greatest-ever rugby players, an iconic leader, a role model in sport and in life and a true gentleman. We congratulate you on your legendary career and wish you the very best of luck in the next phase of your life.