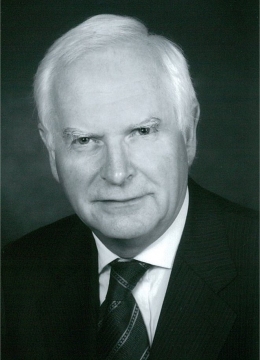 Through voluntary, benevolent activities, P. Gerard Boland has devoted a considerable amount of his time and energy to supporting people from socio-economically disadvantaged backgrounds by promoting education, creating employment and applying philanthropy in his native city of Limerick and beyond.

Educated at Coláiste Mhichíl, Limerick CBS, Gerard Boland trained as a chartered accountant with Metcalfe, Lilburn & Enright and became a partner in the firm in 1971. He subsequently served as a tax partner with Craig Gardner/Price Waterhouse before serving as a partner-in-charge of PricewaterhouseCoopers' Limerick office during the 12 years preceding his retirement in 2002. The introduction of a tax designation scheme for the city centre in 1986 created opportunities for urban renewal, and Gerard was an early advocate of innovative structures to maximise the benefits to Limerick. He applied his knowledge of taxation to facilitate regeneration and foster employment throughout his career. Indeed, since then, Revenue amended tax legislation on at least three occasions to prevent others from using the financing arrangements that Gerard implemented to such good effect of behalf of the citizens of Limerick.

Gerard Boland has provided outstanding and diverse service to the University of Limerick since he first became involved as an advisor to the then National Institute for Higher Education (NIHE) in 1982. Employing his in-depth knowledge of taxation in an ingenious fashion, Gerard devised a solution to the restrictions on the provision of student accommodation and on-campus services when he proposed the setting up of Plassey Trust Limited, the first entity in the country to develop Section 23 student residences. This financing arrangement was subsequently replicated at NUIG and UCD and was later introduced nationally in the form of Section 50 relief for student accommodation.

Gerard's contribution to UL is not limited to devising innovative financing arrangements for the early expansion of the university campus. His wider input into the development of the institution is particularly evident in the university's thriving tax faculty. UL owes a debt of gratitude to Gerard Boland for the strong tax components of its Business Studies, Law & Accounting and Financial Services programmes. He was supportive in a number of ways when taxation was initially incorporated into the university's programmes: he provided resources, technical support and expertise, sat on interview boards and released his own staff to teach modules and deliver guest lectures. In addition, Gerard has served on the Kemmy Business School International Advisory Board and is currently a director of Plassey Campus Centre and a board member of the UL Foundation.

Persistent unemployment in Limerick during the early 1990s motivated Gerard Boland and others to establish Limerick Enterprise Network (LEN). To date, this charitable company has helped to create between 500 and 600 jobs through initiatives such as a low interest rate revolving loan fund and a business community time bank, through which established business people offer mentoring advice to fledgling businesses.

Following the closure of Krups in 1999 with the loss of over 500 jobs, Gerard Boland became involved in plans to create employment for the redundant workers through the provision of training and education. The business model for the proposed plan was heavily interrogated and tested by Gerard before emerging as the self-financing charitable company arrangement that is Limerick Enterprise Development Partnership, or LEDP. Gerard played an active role in financing, refurbishing and securing tenants for the enterprise. Following the disposal of some assets, LEDP is now a debt-free, self-financing entity that facilitates the provision of 700 jobs. On Gerard Boland's initiative and with additional funding from the JP McManus Charitable Foundation and Limerick City and County Council, LEDP recently invested in the redevelopment of the Markets Field sports ground as a home for Limerick soccer.

In 1996, Gerard Boland's resourcefulness and persistence facilitated the refurbishment of the Customs House to provide a permanent base for the display of the Hunt Collection in Limerick. When it seemed like the Hunt Museum's development would have to proceed without the inclusion of an exhibition space in the basement because of a lack of funding, Gerard proposed a financing arrangement that would reduce the cost of the project by IR£425,000 (€540,000). Disappointed but not defeated when his proposal for VAT registration was denied by Revenue, Gerard found a solution in the UK in the case of Museum of Natural History & Science v Inland Revenue. This precedent secured the VAT registration that Gerard sought and facilitated the development of the entire building using a financing arrangement that was subsequently replicated for the refurbishment of Collins Barracks in Dublin. In 2013, Gerard was appointed to the Hunt Museums Trust, the legal owner of the Hunt Collection.

Gerard Boland devotes much of his time to supporting the philanthropic activities of JP McManus. As a member of the JP McManus Charitable Foundation board and the Pro-Am and Benevolent Fund committees, Gerard has participated in the distribution of multi-million-euro funds to deserving organisations in the mid-west region, elsewhere in Ireland and in the developing world. Funding is used to redress disadvantage, provide health care and encourage community involvement in local areas and education. Gerard acts as lead trustee of two annual scholarship schemes: the All Ireland Scholarships, which awards 125 third-level scholarships to second-level students within the 32 counties of Ireland, and the JP McManus Scholarship Fund, which awards eight third-level scholarships to students attending Coláiste Mhichíl, Limerick CBS.

Gerard Boland's local community of Castletroy in Limerick has benefited over many years from his business acumen and resourcefulness. While serving on the board of management of Monaleen National School, he chaired a fundraising committee that raised €90,000. Furthermore, while serving on the Parish Finance Committee, his prudent financial advice and lateral thinking delivered a purpose-built parochial house at no cost to the parish.

In all his exceptional achievements and during his years of providing outstanding service to the University of Limerick, Gerard was enthusiastically supported by his late wife, Sheila, whose wisdom and clarity of thought he frequently sought, and by his four children, Gillian, John, Yvonne and Stephen.