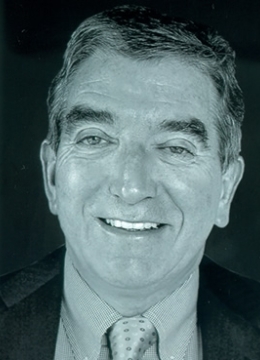 When asked what makes a good leader, Niall William Arthur FitzGerald KBE cites curiosity about the world and a genuine interest in and emotional engagement with people. Niall FitzGerald believes that if a business is to survive, its leaders must engage with the community in which the business operates. His belief that, as a business leader, he has a responsibility to the broader community has been the bedrock of his phenomenal business career - a career that stretches over 40 years and across the continents of Europe, the USA, Asia and Africa.

Raised in Limerick city, Niall FitzGerald attended St. Munchin's College before attaining a B.Comm. from University College Dublin. By the age of 19, he already had a strongly developed sense of social justice, and he was a member of the Communist Party for a short period of time. After college, Niall worked in a shipping business but soon found that he could not compete with Onassis and decided to try something else. His next job came about almost by accident. While waiting for a friend one day, he was asked to sit in on a job interview. The panel members were so struck by Niall's talents that the company pursued him and eventually persuaded him to work for them.

Niall FitzGerald went on to spend over 35 years working with that company. If you have eaten or washed recently, the chances are that the Anglo-Dutch food and personal care company Unilever will have had a hand in it. Knowing that two billion people in 170 countries purchase one of Unilever's 400 brands on any given day, it is hardly surprising that Niall FitzGerald has built a reputation as one of the world's most powerful marketers or that his influence as head of Unilever has changed how consumer goods are marketed from Budapest to Bangalore.

When Niall joined Unilever as an accountant in 1967, he relished challenging the status quo and asked for a motorbike instead of a company car. During his Unilever career, he worked and lived in Ireland, the UK, the Netherlands, the USA and South Africa. He joined the boards of Unilever PLC and Unilever NV in 1987, and his appointment as financial director in the same year marked his entry into Unilever leadership. He went on to serve as Foods Director and then Detergents Director before being appointed Chairman and CEO in 1996. As head of one of the world's largest multinationals, Niall FitzGerald had an unrivalled view of the changing global economy until he retired in 2004.

When appointed to Unilever in South Africa in 1980, Niall FitzGerald ran the company as if apartheid did not exist. He paid employees equal wages regardless of colour or gender; he insisted on integrated facilities at plants and he moved staff around the country in ways unheard of at the time. He is proud of the work that Unilever did to combat HIV/AIDS in South Africa and of the company's local leadership programmes. Unilever's strategy in South Africa was retrospectively endorsed when Nelson Mandela himself asked Niall FitzGerald to head the UK branch of his charitable foundation, the Nelson Mandela Legacy Trust.

On leaving Unilever in 2004, Niall FitzGerald had four key objectives: make one more significant contribution in business, deepen his involvement in Africa, make an impact in the cultural arena and spend more time with his family.

The business goal was realised in 2005 when Niall was asked to chair Reuters, a role he performed until 2011. During his time at Reuters, he negotiated the company's merger with Thomson to become Thomson Reuters.

Further involvement in Africa came in the form of chairing the Nelson Mandela Legacy Trust, sitting on the President of South Africa's International Investment Advisory Council and co-chairing the Investment Climate Facility for Africa. Niall's cultural aspirations were fulfilled in 2006 when he was asked to chair the board of the British Museum. He was the first non-British person to take on this prestigious role and went on to serve two very successful four-year terms at the helm.

Regarding the fourth aspiration, Niall guards his time preciously in order to spend more of it with his wife, Ingrid, and his four children.

In November 2008, Niall FitzGerald was appointed chair of the strategic intelligence consulting business Hakluyt & Company Limited, where he served until July 2013. He currently chairs the Leverhulme Trust Board, which distributes over £60 million a year in grants and scholarships for research and education.

An enthusiastic runner, Niall takes a keen interest in sport and is an avid supporter of Manchester United and Munster Rugby. In 2012, he was appointed Chairman of the Munster Rugby Commercial Board, which was set up to maximise revenue for the club. True to form, a number of significant developments for Munster Rugby have followed since Niall's appointment.

Described as one of those rare people who combine vision with operational skills, Niall's experiences at Unilever undoubtedly guided his life and career. However, Niall also cites his mother, Doreen, and Nelson Mandela as powerful influences: he attributes to his mother his way of thinking and is grateful to have learned the power of humility from observing Mandela.

Niall FitzGerald has received many awards and accolades over the course of his career. He was made an honorary Knight Commander of the British Empire (KBE) in the Queen's 2002 Honours List for services to industry. In 2004, he was awarded the Society of Chemical Industry's Centenary Medal in recognition of his contribution to the food and pharmaceutical industries. In 2006, his significant contribution to international business won him the Royal Dublin Society's Gold Medal. He won the Woodrow Wilson Award for Corporate Citizenship in 2008 and the Perlmutter Award for Excellence in Global Business Leadership in 2011. He has been awarded honorary doctorates from American, British and Irish universities in recognition of his exceptional achievements.

In honouring Niall FitzGerald today, we honour a man who has made an outstanding contribution to the business world and to society.