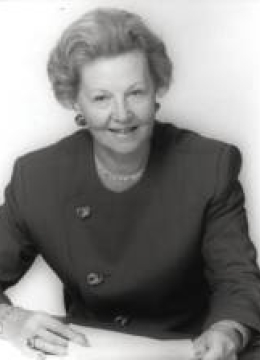 It is with pleasure that I, a Limerickman, present Mirette Corboy to the University of Limerick and to the Limerick community who know her so well.

I first met Mirette Fitzgerald in the early 1950s at a time when the boys of the old Crescent College and the girls of Laurel Hill FCJ Convent were wont to get together.  Mirette had just returned from the University of the Sorbonne in Paris where she received her third-level education.  She had become fluent in French and had acquired much of the poise of Paris; this contributed in no small way to her naturally warm and helpful disposition.  In due course she married Sean Hanley, Civil Engineer and thus started a new life of much achievement, but also some sadness.

Mirette emerged over time to be the quintessential model of the active women totally integrated into Irish society.  Sean Hanley foresaw the opportunities which would flow from the economic developments of the late 1950s and the 1960s; Mirette Hanley became a co-founder, with Sean, of the construction company, Portland Estates Limerick Limited, a company specialising in housing, general contracting and development.  At this time, Mirette and Sean had a family of two boys and one girl.  Tragically, in 1973 Sean Hanley died suddenly, leaving Mirette to carry on as sole Managing Director of the business.  Despite all the problems of that period, including the oil crisis and the severe shock to the construction industry, Mirette Hanley was a force to be reckoned with in the business world.

In 1977, she married Tony Corboy, a Limerick businessman.  Tony Corboy had three daughters from his first marriage, having tragically lost his wife at a very young age.  Once again, Mirette had a partner with whom to share her business activities, and to help in bringing up their family, all of whom have pursued their own careers in finance, law, marketing and business.

As Managing Director of the restructured Portland Estates, Mirette became involved with the Construction Industry Federation and proceeded to represent Limerick on the National Council of the CIF.  During this time Mirette Corboy took a keen interest in community affairs, giving unselfishly of her time as Chairperson of the Board of Limerick Youth Service, which is involved in the training and caring for under-privileged, deprived and abused children.

Mirette Corboy was by now on the Governing Body of the National Institute for Higher Education, Limerick prior to its becoming a University.  In this role, she became aware of the needs and aspirations of this young Institution and was of great help to Dr Edward Walsh, our President, in integrating this new educational institution into the commercial and professional life of Limerick and the mid-west.  In 1992, Mirette Corboy became the first woman National President of the Construction Industry Federation and since then has been elected for a second and a third term of office.

Inevitably, Mirette Corboy's abilities and talents were recognised by the Government, State Agencies and the commercial sector in Ireland.  Thus, she became one of the first Directors of the Housing and Finance Agency; she was appointed by the Government to the Building Regulations Advisory Board, to the Boards of the Enterprise Trust, and the National Economic and Social Forum, and also, to the National Roads Authority.  She represents the Construction Industry Federation on the prestigious Central Review Committee, which directly advises the Taoiseach's Office.

She has represented Ireland on many occasions.  As President of the CIF, Mirette attended the World Housing Convention in Dallas in 1992.  She was the first woman ever to attend this Convention as President of a member organisation.  She has led a number of delegations to Brussels and to Strasbourg where, as a native of Limerick, she has been a forceful advocate of the need for the Western Euroroute and her efforts were finally awarded by the inclusion of the Western Euroroute in the Trans European Road Network proposals in 1993.  Mirette serves on the President's Committee of Féderation de l'Industrie Européene de la Construction, which has supervised the development of a strong European policy focus in regard to construction.

Mirette Corboy has contributed enormously to community development, and in particular to the University.  As Chairperson of Plassey Campus Centre Limited and in association with John O'Connor, Director of Finance and Physical Development of the University, the idea of the student residence package was conceived.  The very visible and tangible evidence of that most valuable project was to be seen by all of you as you approached the entrance to the University today.  This idea has now been replicated by many other universities.  Plassey Campus Centre Limited has continued to evolve and develop its creative ideas, and happily, a new student village is now under construction at the eastern side of the Campus.

Those of us who know Mirette Corboy realise how much she loves gardening, and how attached she is to all things musical.  We are aware of her appreciation of the beauty and intellectual stimulation of antiques.  In this context, we would like to think that the melange of the grand old palazzo style building, Plassey House, and the new Foundation Building, both of which house art, old and new, and peopled with the searching faces of the University's researchers, gives her considerable satisfaction.  She has made it happen.  For that Mirette, we say go raibh míle maith agat agus go mairir I bhfad ag tabhairt tuilleadh cabhrach dúinn.

Finishing, where I started, with Mirette Fitzgerald, I give you Thomas Davis on the same subject:

These Geraldines!  These Geraldines! - not long our air they breathed,
Not long they fed on venison, in Irish water seethed,
Not often had their children been by Irish mothers nursed,
When from their full and genial hearts an Irish feeling burst!

It is essential to recognise today social, charitable and personal contributions which have had a substantial and long-lasting impact on the well-being of what are commonly referred to as 'these islands'.