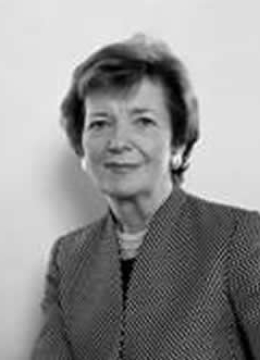 Today the University of Limerick honours the outstanding achievements of Mary Robinson. From 1990 to 1997 Mary Robinson served as President of Ireland. Ms Robinson brought a strong sense of justice and compassion to this post; her dynamic energy radically altered the nature of the office; her openness and warmth communicated a generous, full-hearted vision of Ireland to the wider world. The President taught us through these years that cultural plurality would enliven Irish cultural and economic life, that the health of the country depended on an increasing diversity of population and generosity of outlook. As John F. Kennedy noted in 1959, "In giving rights to others which belong to them, we give rights to ourselves and to our country". Ireland's current strengths were seeded by a forward-looking philosophy of human rights and an acceptance of the need to adapt and change to meet its demands, a philosophy that has been expounded by Mary Robinson throughout her public life. She restated this in her compassionate and forthright Romanes lecture of 1997 - "Not only are all human rights universal, indivisible, interrelated and independent, they are inherent in human nature and pertain to the individual". In 1969, Mary Robinson entered Seanad Éireann as an Independent senator and also took up the Reid Chair of Constitutional and Criminal Law at Trinity College, Dublin. For two decades she campaigned vigorously on issues including civil rights, especially the rights of women, homosexual law reform, the rights of travellers, the Wood Quay controversy and the rights of unionists to be consulted on the Anglo-Irish agreement. 'It is not in the still calm of life, or the repose of a pacific station, that great characters are formed. Great necessities call out great virtues" wrote Abigail Adams in 1780, sentiments appropriate to the tenacity of purpose with which Mary Robinson tackled the issues of the day. Her respect for the beliefs of others and commitment to dialogue characterise her career as a politician. These qualities were brought to the office of President in 1990 and her willingness to offer hospitality, to meet, talk, and exchange views with others regardless of class, race or income endeared her to the country and to the world at large. The welcoming candle in the window of Áras an Uachtaráin, the House in the Park, became an international symbol for Irish people across the world - Jean Kennedy Smith commented, "when the trees are bare and the darkness comes early, I drive by President Robinson's house . . . through the branches, I see a simple light shining in her window". On taking up the Presidency, the President spoke of her pride at being able to represent the 70 million people claiming Irish descent, those who belong to what John Hume has called, "the biggest wandering people in the world". Her continuing commitment to the needs of the travelling community and to the urgency of famine relief added to the moral authority which Mary Robinson brought to the office; a diplomatic meeting with the British royal family was a first for an Irish president - and there were a number of unprecedented acts of generosity and welcome during this presidency.

Mary Robinson stood tall as a figure able to unite differing factions, to act as a peacemaker, to articulate the voice of Ireland as an imaginative, charitable and dynamic force for good in the world. In her Inauguration Address, she referred to the mythical Fifth Province of Ireland - "a place within each of us - that place is open to the other, that swinging door which allows us to venture out and others to venture in . . . If I am a symbol of anything I would like to be a symbol of this reconciling and healing." From 1997 to 2002 Mary Robinson served as United Nations Commissioner for Human Rights becoming the first Commissioner to visit Tibet in 1998, the same year in which she took on the Chancellorship of Dublin University. During her time as Commissioner, Mary Robinson travelled to Tibet, Rwanda, South Africa, Colombia, Cambodia and China. The High Commissioner was entrusted with the task of re-orientating the High Commissioner's role by integrating human rights concerns into all United Nations activities. Mary Robinson's astonishing record in civil rights and in international diplomacy made her the ideal person for this role. By the time she left office, human rights were being monitored in more than 20 countries. In 1997 Mary Robinson gave the Romanes Lecture at Oxford University and eloquently summarised her approach to human rights: "My own approach to human rights is based on an inner sense of justice, perhaps because I am from Ireland and have my roots in a past of struggle for freedom, of famine and of dispersal of a people, perhaps also from my experiences as a lawyer and politician and, more recently, as a President privileged to visit and be a witness to profound suffering and deprivation in countries such as Somalia and Rwanda." Ms Robinson went on to detail issues concerning development, the rights of indigenous peoples, the rights and empowerment of people with disabilities, gender mainstreaming and issues of benchmarks and accountability in furtherance of these rights.

Appointments and honours have been abundant - Ms Robinson holds more than thirty honorary doctorates. Cambridge, Columbia, Harvard and Yale are among the awarding institutions. She is also on the Board of numerous international organisations and academic bodies. Among her many honours, Ms Robinson has been awarded the Global Leadership Award of the United Nations Association of New York, the Fulbright Prize for International Understanding and the Erasmus Prize. The Indira Ghandi Peace Prize followed in 2000 and the Sydney Peace Prize in 2002, the same year in which she became Honorary President of Oxfam International; she is also chair of the Council of Women World Leaders and Chairperson of the Irish Chamber Orchestra based at the University of Limerick. A recent commitment has been that of President of Realizing Rights: The Ethical Globalization Initiative, an organisation that Mary Robinson has established and which seeks to bring a human rights agenda to the key issues of Trade, Migration and Aids. By incorporating human rights into the globalisation process, supporting capacity building and good governance in developing countries, Realizing Rights seeks to demonstrate, in Mary Robinson's words, that "economic and social rights have to go hand-in-hand with political rights". In 2004 Mary Robinson took up the Professorship of Practice in International Affairs at Columbia University. Among her many awards is the Franklin D. Roosevelt Four Freedoms medal awarded in 1998. It is salutary today to recall the words of Franklin Roosevelt - 65 years ago he looked forward to a world founded upon four essential human freedoms: "freedom of speech and expression - everywhere in the world ... the freedom of every person to worship God in his own way - everywhere in the world ... freedom from want ... everywhere in the world ... freedom from fear ... anywhere in the world". The courage, energy, openness, generosity, tolerance and breadth of vision of Mary Robinson stand as beacons on the road to the realisation of Roosevelt's dream. The intellectual stature, clear-sighted wisdom and practical activism of Mary Robinson in a variety of posts have changed the understanding of Ireland throughout the world; the country is indeed fortunate to have been the birthplace and home ground of a leader of this stature.