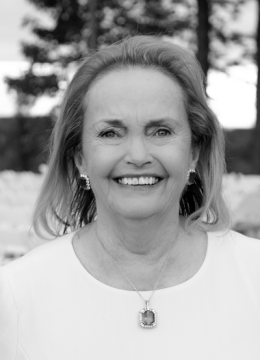 The University of Limerick welcomed almost 16,000 students onto its campus at the beginning of the academic year. The vast majority of these students will visit the University’s library many times during the course of their studies. As they enter the library, they will pass a framed plaque that commemorates the opening of the Lewis L. and Loretta Brennan Glucksman Library and Information Services Building on May 15th 1998. In encapsulating the role the Glucksmans played in the task of bringing the library to that point on that landmark day, the message under the official statement says it all: “Lewis and Loretta Glucksman provided the leadership that united the support of private donors and the State in building this facility”.

The granddaughter of four Irish immigrants, Loretta Brennan Glucksman was raised in an Irish neighbourhood in Allentown, Pennsylvania and now lives in New York City. Make no mistake about it, though – her true spiritual home is Ireland. She is Irish through and through, and she and Lew had homes in Ireland for a number of years before Lew’s death in 2006. Motivated by her love of all things Irish, particularly Irish history, heritage, culture, arts and literature, Loretta has been, and continues to be, a powerful advocate for Ireland. From 1995 to 2013 she chaired the American Ireland Fund, a global philanthropic network established to promote and support peace and reconciliation, arts and culture, education and community development on the island of Ireland. During the 18 years of Loretta’s tenure, the organisation raised $400 million – including $150 million through the Promising Ireland Campaign – for Ireland and Irish-related causes around the world.

One of Loretta’s proudest accomplishments is the role The Ireland Funds played in advancing and solidifying the peace process in Northern Ireland. During those crucial years leading up to the Good Friday Agreement, Loretta was on first-name terms with the key political leaders and did not hesitate to put her leadership skills and powers of persuasion to good use with them to bring the prospect of peace ever closer. However, her level of engagement with the process went much deeper than words. For example, her belief in the importance of breaking down barriers resulted in the establishment of two integrated schools in the North where Catholic and Protestant children could be educated together. Loretta’s quiet and gentle diplomacy and tireless efforts to spread peace throughout the land of her ancestors have been recognised on both sides of the Irish Sea. In 2002, she was conferred as an Honorary Commander of the British Empire – the highest honour for a non-British citizen – by Her Majesty Queen Elizabeth, and in 2015, she was bestowed a Presidential Distinguished Service Award for Peace, Reconciliation and Development by President Michael D. Higgins. In 2017, she was awarded the Kennedy-Lemass Medal by the American Chamber of Commerce Ireland for her outstanding contribution to US-Irish relations through culture and philanthropy.

Loretta’s level of engagement on the ground is very real and applied. When she engages in a project, she fully commits to it. Through her work with the American Ireland Fund, for example,  she would spend days in Ireland working on the project at hand to ensure it came to full fruition. In the words of the then president of the Worldwide Ireland Funds when Loretta stepped down as chair of the American Ireland Fund, she “made the fund relevant, modern and impactful. She led by consensus and example.”

Loretta has made – and continues to make – an outstanding contribution to Irish life across the areas of business, philanthropy, peace, healthcare, arts and education. The breadth and depth of her engagement with Ireland and the esteem in which she is held are evidenced by the number of Irish boards – public and private, commercial and not-for-profit – on which she has served. These include IDA Ireland, the National Gallery of Ireland, the National Library, the National Concert Hall, the Abbey Theatre, Cork Airport Authority, Trinity College Dublin, University College Cork, the Royal College of Surgeons, Smurfit School of Business at University College Dublin and the University of Limerick Foundation. She is an Honorary Fellow of the Royal Irish Academy, the Royal Irish Academy of Music and the Royal Dublin Society.

“An amplifier for the native voice
Of Irish writing, culture, scholarship
An answer given to the famine ship.”

The University of Limerick has benefitted from Loretta’s advocacy and leadership in a myriad of ways over the years. In addition to their individual acts of generosity, of which there have been many over the course of a quarter of a century, she and Lew lent their name, their stature, their reputation and their extensive networks to the fledgling university and, by doing so, attracted other benefactors to do likewise. In relation to larger projects, the extent of the support from private benefactors enabled the University to seek matching funds from the State. This public/private funding model would never have benefitted the University of Limerick so well without the support of Lew and Loretta Glucksman and their good friend Chuck Feeney. The work continues to this day, and the University is blessed to have Loretta as chairperson of the UL Foundation since 2014.

In 2001, Loretta and Lew established the prestigious endowed Glucksman Chair in Contemporary Writing in English. One of the specialisms of Professor Margaret Harper, the current chair, is poetry – specifically the work of W. B. Yeats, and UL now has one of the world’s finest collections of Yeats’s work in its Special Collections in the Glucksman Library. As if the Glucksman Chair in Contemporary Writing in English – and the Glucksman Distinguished Visitors Programme – were not enough, Loretta played a key role in setting up the Frank McCourt Chair in Creative Writing at UL. Under the leadership of the inaugural and current chair, Professor Joseph O’Connor, the influence of creative writing at UL has been significantly extended, and the programme is increasingly described as the best in Ireland – although it is active in America too. Indeed, one of its major activities, the biennial Frank McCourt Creative Writing Summer School in New York, takes place with Loretta’s assistance at Glucksman Ireland House, NYU. UL Creative Writing has no firmer friend.

In addition to the Glucksman Library and the chairs in contemporary and creative writing, the breadth of Loretta’s contribution to the development of UL encompasses the University Concert Hall, Brennan Court and student residences. Named for her father – William D. Brennan – Brennan Court provides high-quality accommodation for visiting scholars and is a particularly good example of Loretta’s Irishness shining through on campus. The colourful family crest that is proudly displayed above the entrance archway provides a tangible indication of the extent to which Loretta holds a place in her heart for Ireland as a home from home.

The conferring today on Loretta Brennan Glucksman of this honorary doctorate is the capstone, in many ways, of her membership of the UL family. Her affiliation with, loyalty to and unstinting advocacy for the University, along with her determination that its development be sustainable and progressive, makes us very fortunate to count her as a friend. As well as enriching the imaginations and careers of our current and future learners and researchers, the legacy of her generosity will extend well beyond our own campus – it will enrich the lives of generations of Irish people living at home and abroad for many, many years to come.

There can be no better way to conclude than to return once again to the words penned by Seamus Heaney in 2013 in celebration of Loretta:

“for us LBG is she to whom all glasses must be raised,
So rise up now and toast our honouree.”

Chancellor, I present to you Loretta Brennan Glucksman and ask that you confer upon her the honorary degree of Doctor of Letters.