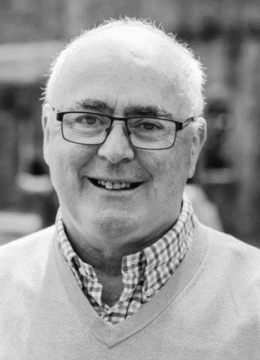 Sport is at the very heart of Irish society and fuels the passions of so many people. Closer to home, sport is an integral part of the University of Limerick’s history, culture and identity. Our magnificent campus, world-class sporting facilities and long-standing sporting reputation have led to UL being widely recognised as ‘Ireland’s Sporting Campus’. As UL commences its 50th anniversary celebrations, it is fitting that we honour one of Ireland’s real sporting heroes and one whose links with UL date back to the college’s foundation.

Liam Moggan is widely regarded in sporting circles as the godfather of coaching and coach education in Ireland. A real unsung hero, Liam’s immense contribution to Irish sport in terms of coaching, coach development, sports management and leadership are without parallel. The role that coaching and coach education play at all levels of Irish sport – from participation to high performance, junior to senior, young to old – cannot be overstated. As well as increasing the chances of success at elite sport, coaching promotes participation at grassroots level by people of all ages and abilities, thereby enhancing the health and wellbeing of the nation.

Born and raised in Tuam, County Galway, Liam Moggan was greatly influenced by his grandfather, whose pearls of wisdom he often quotes. It is no exaggeration to say that every coach on every one of Liam’s tutor training courses is familiar with Liam’s “grandfather from Cloonaglasha” without ever having known the man! It was during Liam’s formative years at Tuam CBS that his passion for sport began to flourish. He quickly became an accomplished athlete and won county senior titles in Galway as a schoolboy and subsequently in Limerick as a student, in Dublin, where he taught, and in Meath, where he now lives.

Liam Moggan’s long association with UL dates back to 1974, two years after NIHE admitted its first students. Liam was among the second cohort of students to attend the Plassey-based National College of Physical Education (later renamed Thomond College), from where he graduated in 1978 with a Bachelor of Arts in Physical Education and Environmental Studies. Given that seven couples were formed out of the 84 students in that cohort, it is fair to say that the group was particularly close-knit! Liam played his part in contributing to that statistic as this is where he met his future wife, Ann McCauley. After graduating, Liam taught physical education, geography, maths and history at Ardscoil Rís, Dublin. Under his inspirational leadership, the school won numerous athletics Leinster and All-Ireland individual and team titles.

It was during his long association with the UL-based National Coaching and Training Centre (NCTC, renamed Coaching Ireland and now Sport Ireland Coaching) that Liam Moggan’s coaching reputation grew nationally and internationally. Between 1991 and 1994, Liam was part of the first Coach Education Development Team, which, under the vision and guidance of the late Professor Pat Duffy, led to the establishment of the National Coaching Development Programme (now Coaching Development Programme for Ireland), a partnership between NCTC and 60 national governing bodies of sport. In 1992, Liam piloted the first cross-sport Introduction to Coaching Course for coaches from rugby, soccer, GAA, athletics and swimming. Between 1994 and his retirement in 2017, Liam led 35 tutor development courses that catered for over 50 sports.

A noteworthy exemplar of Liam Moggan’s international reach can be found in the work he did in equestrian sport. Liam’s pioneering coach education work with Horse Sport Ireland (formerly the Equestrian Federation of Ireland) led to the development and implementation of tutor training and coach education courses with the Fédération Equestre Internationale (FEI), the world governing body of equestrian sport. As part of the implementation of this programme, Liam delivered courses in 15 countries in South America, South Africa and Eastern Europe. Other notable contributions by Liam on the international stage include the delivery of coaching masterclasses for the International Council for Coaching Excellence in Beijing and Leeds and coach education courses for UEFA in Cyprus and France.

Widely recognised as a great orator and communicator, Liam Moggan has commentated on leading sporting events, such as the Dublin City Marathon, Morton Games, Cork City Sports and World Para Swimming Championships. Ably assisted by his daughters Aoife, Róisín and Laoise, Liam would spend days before each event doing extensive research on the athletes he was about to commentate on.

Despite retiring from Coaching Ireland in 2017, Liam remains actively involved in sport and coaching. He currently chairs the GAA National Coaching Committee, is a member of Canoe Ireland and Paralympics Ireland High Performance committees and retains responsibility for the FEI Coach Education Programme.

Throughout his distinguished career, Liam Moggan has always emphasised the importance of developing the person before the coach through a continual cycle of learning. He equates the role of coach educator to that of a facilitator, whose primary task is to enable each person to express themselves and realise their own potential. In Liam’s own words, “Personality should be released in a measured way. I like to widen the measures and act like a nuclear springboard to release coaches to be themselves. When the emphasis is on learning, everything else takes care of itself.”

Chancellor, I present to you Liam Moggan and ask that you confer upon him the honorary degree of Doctor of Letters.