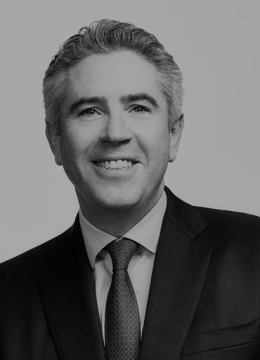 The University of Limerick aspires to produce graduates who are articulate, collaborative, responsible, creative, proactive and knowledgeable. Underpinned by teamwork skills and the ability to think analytically and independently, critically appraise one’s own work and the work of others and apply disciplinary knowledge to new contexts, these qualities are collectively referred to as the university’s graduate attributes. If ever it were possible to find a UL graduate who epitomises all of these attributes, John Slattery would be a leading contender for the role.

Growing up in Ennis, County Clare and educated at the universities of Glamorgan, Limerick and Harvard, John Slattery has displayed extraordinary levels of achievement in the global aerospace industry. His fascination with aviation began early. As children, he and his brother Dómhnal would regularly accompany their father, who had a wholesale business, to Shannon Airport, where they fell in love with aeroplanes and marvelled at the transatlantic journeys the planes were about to undertake. Little did they know that aviation would define both their professional careers.

Beginning his career in Dublin in 1991 in financial services, John took the first of many bold moves when he left Ireland in 1996 to relocate to George Town, Grand Cayman, to join Dómhnal as a partner in the start-up International Aviation Management Group (IAMG). The company quickly grew into a highly successful and respected global boutique advisory firm specialising in helping distressed airlines to restructure their balance sheets. These formative years enabled John to travel the world and learn the commercial aviation business from the inside out; the work involved relocating quite often, for months at a time, to various airlines’ headquarters around the world as he worked on many complex and successful restructurings.

Following the acquisition of IAMG by the Royal Bank of Scotland in 2001, John moved with the bank to New York City as Managing Director responsible for RBS’s asset-lending and aircraft-leasing practices in the Americas and contributed significantly to the emergence of RBS as one of the world’s premier commercial aircraft financiers. While in New York, John was invited to join the board of the bank’s US operations.

In 2007, John was publicly recognised by the industry when he was appointed to the honorary position of President of the esteemed Wings Club, a position granted to non-US citizens only twice in the club’s 80-year history.

Wishing to return to his native Ireland, John Slattery established himself as an aircraft capital markets consultant, which enabled him to co-locate between Dublin and New York. In 2011, with an invitation to join Embraer, the world’s third-largest commercial aircraft manufacturer, John made another bold move by leaving finance and moving closer to the metal, thereby living out his dreams from those early days in Shannon when he marvelled at the beauty of the Aer Lingus 747s parked on the runway apron. Again relocating, this time to company headquarters in Sao Paulo, Brazil, John was appointed Chief Commercial Officer and, in 2016, was named President and CEO of Embraer Commercial Aviation. This marks another accolade for John Slattery – as the first Irish person to hold the position of CEO of a leading airframe manufacturer, anywhere in the world. At Embraer, John led the multi-billion-dollar business case to develop a new family of commercial aircraft – the E2 – through to programme certification and successful entry-into-service in 2018, ahead of schedule and, most notably for a new aircraft, under budget. In 2019, the E2 was awarded the prestigious Project Management Institute’s Project of the Year.

Fourteen months ago, after almost a decade with Embraer, John Slattery was invited by the Chairman of General Electric to join the company as President and CEO of its largest business, GE Aviation. As head of the world’s largest provider of jet engines and services, avionics, digital solutions and aircraft electrical power systems, John presides over a company with annual revenues approaching $30 billion and a workforce of 40,000. He is the first non-American to hold this prestigious position in the company’s 102-year history. John is leading GE Aviation through the COVID-19 pandemic and its disruption to the industry. As he was at Embraer, he is again recognised for championing a more diverse and inclusive culture and embracing Lean manufacturing to position GE Aviation to, in his own words, “reinvent the future of flight”.

In June of this year, John Slattery announced the CFM ‘RISE’ programme – a joint transatlantic initiative between GE Aviation and Safran in France – to develop new technologies targeting a reduction in fuel consumption by up to 20% and CO2 emissions by up to 100% with the capability of burning hydrogen. Such an achievement would put the business on a path to net zero emissions and unquestionably influence the competitors to follow suit. The importance of this move cannot be overstated – it represents the single largest step to improve engine efficiency in the company’s history. Such bold and visionary leadership have become the hallmarks of John’s professional journey thus far.

John Slattery’s appointment to lead GE Aviation reflects his exceptional achievements in aerospace and his potential to radically and strategically reshape a critical global industry. With this new mandate, John’s CV now boasts the role of CEO of both a leading global commercial airframer and the world’s largest and most successful aircraft engine manufacturer – a unique combination in the aviation industry. In addition, his election as Fellow of the Royal Aeronautical Society and his board appointments at the Aerospace Industries Association and the Smithsonian National Air & Space Museum in Washington DC provide further evidence of his immense stature in the industry.

Closer to home, John’s fellow UL MBA students remember his unique combination of competitiveness and collegiality. They recall how, when working on group projects, they would receive emails from Brazil at 3am in the morning encouraging them to contribute to their latest group assignment. Emails would follow at 4am with a gentle reminder, at 5am with suggestions of how they might contribute, at 6am with text they could actually use, at 7am with further helpful materials and at 8am with a close-to-final draft of the project, incorporating the feedback his exhortations had finally managed to elicit from his recently awakened co-workers!

Faculty members remark on a similar dynamic and remember calling upon John’s social capital to galvanise the class into believing that the topic being covered was both relevant and important. From the finer points of budgeting to the sheer intensity of negotiation, John had stories to tell that infused the classroom with immediacy and currency. In fact, all who dealt with John Slattery at UL remember a supportive and intellectually generous colleague who challenged them to reach heights they had neither imagined nor fully anticipated. More to the point, people remember a friend who drew on deep personal values and ethical convictions that they are not in the least surprised to see playing out in John’s current role at GE.

Chancellor, I present to you John Slattery and ask that you confer upon him the honorary degree of Doctor of Economic Science.