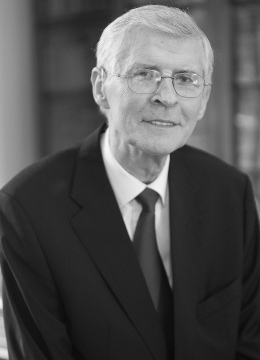 John O'Connor was once described by a government minister as a disprin for a sore head. Likening John O'Connor to a cure for the numerous headaches experienced by the University of Limerick during its growth and development doesn't begin to describe the value of the man to the institution. From a single building on a 167-acre site in 1972 to 43 developments comprising 210,000 square meters of building space on 332 acres today, the physical and infrastructural expansion of UL can be attributed to John O'Connor more than to any other individual.

A native of Boherbue, County Cork, John O'Connor graduated from UCG with a BA in History, Latin and Philosophy in 1966. He qualified as a chartered accountant in 1970 and worked with CraigGardner (now PriceWaterhouseCoopers) for the next two years. By mid-1972, John was looking for a change of direction - his objective was to pursue a career that involved developing and managing services that made a significant contribution to society. Later that year, an opportunity presented itself that had the potential to enable John to do just that. The newly established National Institute for Higher Education in Limerick needed an accountant to develop and manage its finances. Despite the temporary status of the position, such was John's interest in the young institution that he applied for the job. We are all very glad that he did. John was hired in September 1972, was appointed finance officer in January 1973 and became director of Finance and Physical Development in 1980.

When John O'Connor joined NIHE, its overriding objective was to become a fully-fledged university. Influenced by Ed Walsh's development strategy, which was based on a North American concept that state universities should contribute to the economic, social and cultural development of their state, John O'Connor put forward many visionary ideas for the evolution of NIHE. According to Dr Walsh, John dealt effectively with our difficult financial circumstances and impressed me in the way he tackled forward planning ...

NIHE's initial campus development plan was bold and ambitious - it set a 20-year target of 8,000 for the enrolment capacity, which at the time represented 40% of total student enrolment across the five existing university colleges. John O'Connor headed up a successful bid in 1983 to secure European Investment Bank funding for Phase 1B of the development plan. At NIHE's request, EIB ensured that funding levels be based not only on the construction costs but also on the cost of fully equipping each of the project's 52 laboratories. This was the first time the EIB had provided loan finance for university development in the EU.

One only has to walk around our wonderful campus today to see the fruits of John O'Connor's ingenuity and unstinting hard work. John's vision led the development of a range of communal, cultural and sporting facilities for students, staff and the wider community. These facilities are nationally and internationally unrivalled and the envy of many. Ed Walsh and John's close working relationship with philanthropists such as Chuck Feeney and Lew and Loretta Glucksman enabled the speedy advancement of facilities at UL over the last three decades. Developments presided over by John O'Connor and funded in partnership with philanthropists include the University Concert Hall, the Glucksman Library, the Irish World Academy building, the Graduate Entry Medical School, the University Arena, student residences and two bridges over the River Shannon. In fact, a list of the projects spearheaded by John would include every building and structure on campus, from academic, research, sporting and residential to medical, music, culture and arts facilities. It's no wonder that Ed Walsh refers to John O'Connor as the only accountant he knows who can add 3 and 3 and get 8!

By 1984, more than 3,000 students were studying on campus. The provision of campus life services at NIHE, which had been a medium-term strategy of the institution since its foundation and for which neither state approval nor funding was forthcoming, turned out to be a major challenge. With typical foresight and lateral thinking, John O'Connor masterminded the establishment of Plassey Campus Centre - a special-purpose company that had the legal power to develop self-financing student residences, facilities and communal services on campus. John's role in the provision of campus life services is best summed up by Chuck Feeney: John O'Connor, the university's impish finance officer, circumvented the Department of Education by creating a private company that, being legally independent, could not be issued with any directive to stop construction. Once again John proved to be an effective dispenser of painkillers for sore heads.

Under John's astute direction and with a generous pledged donation from Atlantic Philanthropies, a plan was in place by 1996 to construct a state-of-the-art sports arena including an Olympic-size swimming pool. Even though Atlantic Philanthropies' John Healy considered John O'Connor to be the smartest guy in the field, so sceptical was he of John's ability to procure sufficient government funds for the project that he promised to swim two laps of the new swimming pool - in the nip - if the facility was ever constructed. The magnificent University Arena and Ireland's first 50-metre swimming pool were completed and came into operation in 2001 but history does not relate with certainty how John Healy managed to keep his promise!

John O'Connor's outstanding contribution to the development of UL was not confined to directing the physical expansion of the campus. During NIHE's first decade, John oversaw the successful implementation of the staff pension scheme and, along with fellow honorary doctorate recipients Leo Colgan and Pat Kelly, developed a creative strategy for bringing staff pay grades in line with those of the other universities. So successful was this strategy that Ed Walsh was quickly summoned to government buildings to justify it, which of course he duly did. John also played a very significant role in NIHE's successful bid to gain university status in 1989 and in the passing of the Universities Act 1997. In 1998, under a new administrative structure put in place by President Roger Downer, John O'Connor was appointed Vice President Administration.

John played a leading role at national level in negotiating with the Department of Health and Children for the provision and funding of nursing degree programmes across Irish universities. John was also hugely instrumental in UL's bid in 2001 to deliver a range of clinical therapy programmes. The bid attracted significant competition from some other universities. The success of the bid can be deemed to be a forerunner to the establishment at UL in 2007 of the Graduate Entry Medical School, for which the extremely competitive tendering process was led by John O'Connor.

When Professor Roger Downer stepped down as president of UL in April 2006, John O'Connor took on the role of president until the appointment of Professor Don Barry in May 2007. This well-deserved appointment demonstrated the level of respect and confidence John had inspired in colleagues and friends throughout his career at UL. The extent of John's role in founding NIHE and his contribution to the development of the University of Limerick until his retirement in 2010 cannot be overestimated, and he leaves behind a legacy to be enjoyed by all for many years to come.