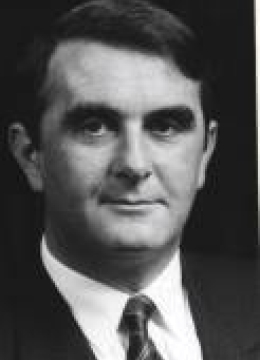 Mr Justice John L Murray is a member of the Court of Justice of the European Communities which has its seat in Luxembourg.  He is the fourth Irish Judge of this the most important Court in the European Community.  He is also the first of a new generation of its judges, appointed to his present distinguished position at, in legal terms, the extremely youthful age of forty-eight.

Born in Limerick in 1943, Judge Murray was educated at Crescent College and Rockwell College before going on to University College, Dublin and the King's Inns.  During his student days he was very active in student affairs and was twice elected President of the Union of Students in Ireland.  Equally active in his studies, he attained high distinction in his examinations.  In 1967 he graduated from University College, Dublin and was called to the Bar.  The following decade saw him build up a busy practice in the South-Western Circuit and in Dublin.  As a Junior Counsel Judge Murray was to take part in many of the most fascinating cases of the day, including the Arms Trial and the O.N. Adoption case.  Perhaps the peak of his career as a Junior Counsel was his selection to represent Ireland in Ireland v. United Kingdom before the European Court of Human Rights at Strasbourg and Stavanger.

In 1981 Judge Murray was called to the Inner Bar.  A well-earned holiday abroad in the following year brought him a certain - dare it be said - notoriety, when for at least twenty-four hours he was the most wanted man in France.  Urgently sought by the French police, at the request of the Irish Government, he returned to Ireland to be immediately appointed Attorney General.  But his period in office was short-lived, lasting only until December.  Ominously, on the very day that the South-Western Bar gave a dinner to celebrate his appointment, the Government fell.  Maintaining his sang-froid and showing remarkable foresight, Judge Murray, in his after-dinner speech, graciously thanked his hosts for honouring him on this his first period in office as Attorney General.

As a Senior Counsel he developed a wide-ranging practice in civil and constitutional law, appearing in such major cases as the Whiddy Oil Terminal Enquiry and the Stardust Enquiry.  He also gained experience in a wider sphere as counsel in cases before the European Court of Justice and the European Court of Human Rights.  He was once described in print as possessing a cool and concise legal brain and a good sense of humour.  While taking the first of these attributes for granted, there is a large body of evidence to support the latter.  In March 1987 his prophetic words at that Bar dinner in 1982 were fulfilled when, for the second time, he was appointed Attorney General of Ireland.  His period in office was marked by many thorny issues, all of which he handled with his customary common sense and skill.

In October 1991, with an unerring sense of timing, he accepted the nomination of the Government to the European Court of Justice, leaving his successor to deal with whatever little local difficulties might come his way.  Today, as a Judge of the European Court of Justice, this most eminent of Limerick's sons is at the very centre of the process of European integration.  Judge Murray has always been proud of his native city, as well as being its loyal friend and defender.  He is also a loyal friend and a firm supporter of this University, and for this support the University of Limerick will always remain grateful.  Limerick can be very proud that one of its most distinguished citizens is today President of the Second Chamber of the Court of Justice of the European Communities.  It is, therefore, fitting that the University of Limerick should honour Judge John L Murray by conferring on him the Honorary degree of Doctor of Laws.