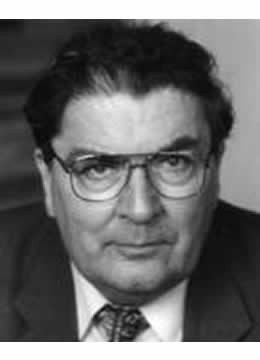 John Hume is honoured today by the University of Limerick for his outstanding contribution to peace on this island, for his reputation throughout the world as a moral and just politician, and for his high standing in modern political history. After reading for a degree of the National University of Ireland in History and French at St Patrick's College Maynooth, John Hume began his political career as an independent member of the Northern Ireland Parliament in 1969. In the short-lived power-sharing government of 1974, he served as Minister of Commerce. He has since served as Member of the Westminster Parliament for Foyle, as a member of the European Parliament and as a member of the Northern Ireland Assembly. He was leader of the Social Democratic and Labour Party from 1979 until 2001. In the 1960s John Hume was active in establishing the Credit Union movement in the North of Ireland and was President of the Credit Union League of Ireland from 1964-1968; he later described this organisation as "one of the greatest movements in the history of Ireland", a bank for poorer and working-class people. At this time he also set up the Derry Housing Association with Father Anthony Mulvey, and began a career of public service responsibilities - to the people of Derry, of Ireland and of Europe and beyond - and that continues to this day. The support and extension of human rights and civil rights to all have been the major concern of John Hume's public life and he is renowned for his work in this area. He received an Honorary Doctorate in Law from Boston University in 1995 in recognition of this work.

John Hume helped to found the Social Democratic and Labour Party in 1970, acted as a member of the power-sharing executive set up after the 1973 Sunningdale Agreement, and became leader of the SDLP in 1979, the same year in which he became a member of the European Parliament. John Hume's politics are aptly summarised in the editorial of the Irish Independent of 5th February 2004, the day after he announced that he would no longer stand for a seat at Westminster:

'John Hume broke the mould of Northern politics and cast unity in a new light. He put people first before ideology, before territory'. First elected to Westminster in 1983, John Hume's record as a humanist and politician of world rank commenced with his much-applauded maiden speech to the House - he argued for a 'definition of Irishness which is inclusive, not exclusive' and asked 'what is wrong with asking to be able to build structures whereby the different traditions can live in peace, harmony and unity in a new relationship with Britain...?' The following year he was re-elected to the European Parliament. A major breakthrough in the history of these islands was achieved with the signing of the Anglo-Irish Agreement in 1985 following the New Ireland Forum. John Hume, a leading architect of the agreement, termed it 'the road of maximum consensus' and declared in the European Parliament, that it offered a unique opportunity to make progress towards peace and conciliation.

In 1994, after long years of negotiation, John Hume turned once more to the European model as central to the philosophy of a new Ireland. He commented ' ... they can build common institutions which preserve their differences, which allow them to work their common ground ...bread on your table, a roof over your head, the right to existence. Not just the right to life, but the right to a decent standard of living, to a home, to a job, to education, to health ... they broke down the prejudices of centuries to make the healing process take place...'

The early years of the Anglo-Irish Agreement were the years in which John Hume patiently reiterated this vision, seeking a means of bridging and binding the bitter scars of division in Ireland. 'The old law of an eye for an eye leaves everybody blind' said Martin Luther King, a warning adage that John Hume took to heart. His obsessive search for a tolerant and peaceable solution to the Irish question led in the nineteen-nineties to the Hume/Adams dialogue which paved the way for the Good Friday Agreement of 1998, a momentous year for Ireland and for John Hume. The Good Friday agreement, endorsed by referenda in Northern Ireland and in the Republic of Ireland, led to the setting up of an Assembly and Executive in the Northern Ireland which remains the best hope for peace that has emerged since the difficult years of the Troubles. In 1998, John Hume was awarded the Nobel Peace Prize. David Trimble, leader at that time of the Ulster Unionist Party was a joint winner of the award. John Hume's work for peace across many decades received global attention; and he completed the unique feat of being the only person in history to have won the three major peace awards in the world - the Nobel Peace Prize, the Gandhi Peace Prize and the Martin Luther King award. He retired from the leadership of the SDLP in 2001 and received praise across the political spectrum of Northern Ireland. In 2004, he announced his complete retirement from politics.

John Hume has an assured place in the history of modern Ireland and as a peacemaker of world status. He has unstintingly given of his intelligence, energy, time and passion to the cause of reconciliation. The tortuous and complex negotiations that have led to a new beginning for Ireland were brought to fruition through his empathetic vision of a tolerant and inclusive country whose citizens could live and work in peace with respect for one another's beliefs and way of life.

In his Nobel Prize speech, John Hume expressed his hope for Ireland. We join him in these hopes:

'I want to see Ireland - North and South - the wounds of violence healed, play its rightful role in a Europe that will...be a shared bond of patriotism and new endeavour.

I want to see Ireland as an example to men and women everywhere of what can be achieved by living for ideals, rather than fighting for them, and by viewing each and every person as worthy of respect and honour.

I want to see an Ireland of partnership where we wage war on want and poverty, where we reach out to the marginalised and dispossessed, where we build together a future that can be as great as our dreams allow.'