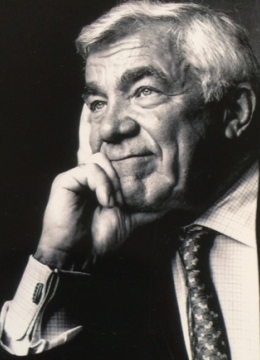 Dr. James McCarron was busily working in his rooms in New York in 1992 when a stranger walked in and asked him if he would consider joining the board of a foundation of an Irish university that he had never heard of. The upstart requester was Edward Walsh, president of the newly founded University of Limerick, and he was on a mission to put in place a group of nationally and internationally distinguished academic and business leaders to form what was to become the University of Limerick Foundation. Ed Walsh came armed with an introduction from Chuck Feeney, which was enough for Dr. McCarron to agree to the request without any hesitation.

And so began Jim McCarron's relationship with Ireland, the University of Limerick and the University of Limerick Foundation. Jim joined the board of the Foundation in 1993 and - to our great benefit - is still a member, which makes him one of the Foundation's longest-serving directors. In fact, retirement from any of his endeavours, including the day job back home in the United States, is not something Jim has yet learned to fully embrace.

Dr. James McCarron, Jr. is a distinguished urologist with a medical practice in New York City. He is currently Clinical Assistant Professor at the Weill Cornell Medical College at Cornell University and is Assistant Attending Surgeon at NewYork-Presbyterian Hospital. After completing a BA degree at Yale University and an MD degree at the University of Virginia School of Medicine, he undertook his general surgery training at the University of Michigan in Ann Arbor and completed his urological residency at the New York Hospital Cornell Medical Center. Following a career as an active urological surgeon concentrating mainly on oncology, Dr. McCarron now spends most of his time as a urological consultant with a main interest in prostate cancer, and he teaches urology to students and residents at NewYork-Presbyterian Hospital.

During the Vietnam conflict, Jim McCarron served for two years as a general surgeon with the United States Navy Medical Corps assigned to the United States Marines at Camp Pendleton, California. He was part of a medical team that cared for the 40,000 marines and their families who lived at Camp Pendleton. Dr. McCarron was promoted during his service to the rank of Lieutenant Commander and was honourably discharged in 1972.

In 1990, Jim set up the James P. McCarron, Jr. Medical Foundation for conducting medical research, mostly on prostate and bladder cancer. The Foundation has also funded non-cancer projects, especially in the area of immuno-inflammatory disease. In addition, the Foundation sponsors an annual seminar on paediatric urology at NewYork-Presbyterian Hospital.

As well as joining the board of the UL Foundation in response to Chuck Feeney's encouragement, Jim was motivated to do so by his love of Ireland and his desire to get to know the homeland of his ancestors.

Both his paternal and maternal grandmothers came from Clare, and his paternal grandfather came from Monaghan. During trips to Ireland for the annual or biannual board meetings at UL, Jim and his wife, Maureen, have taken the opportunity to visit different parts of the country, and their love of Ireland and its people has grown with every passing year. Sometimes Jim and Maureen have been joined in their travels here by their son, Jamie, and daughter, Christina, and, on this occasion, by their beloved grandson, Somers, otherwise known to his grandparents as "the champ". We are delighted that Maureen, Christina and Somers could join us here today to honour Jim. You are all very welcome, and we extend an open invitation to you to return to UL with Jim as often as you can.

Jim McCarron is one of the most loyal and committed members of the UL Foundation. Since joining the Foundation in 1993, he has rarely missed a board meeting. From a starting position of never having heard of the University of Limerick, Jim's commitment to and enthusiasm for the University's growth is ever-present, and he takes immense pride in the many phenomenal developments that have taken place on campus with Foundation funding. Two achievements stand out for him as being most special - the Graduate Entry Medical School and the Irish World Academy of Music and Dance. In fact, Jim played a significant supporting role in realising the dream of establishing medical education at UL.

When the concept of adding a medical school to the campus was first mooted in the early 2000s, Jim McCarron was very encouraging of the initiative and provided invaluable assistance to (then) President Roger Downer, Vice President Academic & Registrar Don Barry, Vice President Administration John O'Connor and Director, Medical School Development Paul Finucane in their quest both to build credibility for the concept and to encourage prestigious oversees institutions to offer support and advice. Jim facilitated engagement between the UL team and Cornell University, with whom he has such strong links. Thanks to Jim's influence and introductions, doors at Cornell opened and advice was dispensed that contributed in no small way to an international team of assessors selecting UL as the site for Ireland's first graduate-entry medical school.

In addition to being a regular personal donor to the UL Foundation since joining the board, Jim McCarron has been a wonderful catalyst for forging links between the United States and UL. He has chaired the University of Limerick Foundation Incorporated - an American philanthropic body associated with the University and the Foundation - since 2004. The University of Limerick Foundation Incorporated is a registered charity, and Jim and his fellow directors review and approve grant applications from UL to support a range of education, research and community service initiatives. Jim works enthusiastically to promote the University in the USA and to attract influential people to the UL Foundation; in fact, we have Jim to thank for the welcome addition of fellow-Americans Paul Kimball and Michael "Buzzy" O'Keefe to the board of the Foundation.

Jim McCarron has been a strong advocate of the concept of fundraising from alumni. Although the American culture of alumni supporting their alma mater is less developed in Ireland, Jim continues to share his knowledge of the US system with the Foundation and has been steadfast in his efforts to encourage UL to reap more benefits from its growing and maturing alumni base. We are grateful to Jim for his insights and his determination to champion this cause in the best interests of UL.

Twenty years after joining the board of the UL Foundation, Jim was asked in an interview to explain what kept him on the board for so many years. His reply sums up the ethos then and now of the UL Foundation: "The board is a very pragmatic entity with a spirit of going out and getting what it wants, a culture of not taking 'no' for an answer - something that has always been an intrinsic part of the true UL spirit". He said that seeing the potential of the University and its campus was what kept him involved then and motivated to this day and that he felt honoured to be able to give something back to the land of his forefathers. Today the University of Limerick embraces Jim as one of the longest-serving directors of its Foundation and one of the most loyal members of the UL family. Jim, you are truly one of our own, and it gives us immense pride to honour you today in the company of Maureen, Christina, Somers and your many UL friends and colleagues.