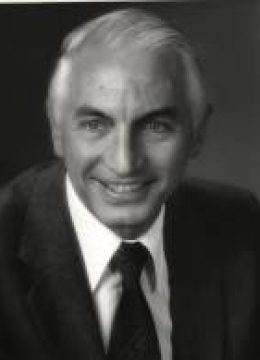 The qualities of character for which we honour Hilton Keith Davies today are well exemplified in the pattern of his career.  Before entering the University of Witwatersrand as an undergraduate, Hilton Davies spent a year working as a diamond sorter with De Beers.  Upon graduating he returned to the company and began to work his way through a range of occupations.  As stock clerk, accountant, works secretary and manager Hilton Davies gained an insight into the detailed processes involved in the manufacture and marketing of materials.  The skills that he brought from these formative years played a part in shaping his characteristically dynamic and influential management style.  His management credo, 'hands on; decentralise; lead from the front', a pithy lesson for any manager, sums up the committed and practical intelligence that he has brought to bear upon the leadership role.

Hilton Davies is not slow to take on challenges.  As Executive Chairman of Boart Longyear, Hilton Davies gives his recipe for improving the South African economy; in the following quote from an article in Engineering News, he states: 'We suffer from the days when labour was not allowed to become part of the business and we've got to get over that barrier now'.

These sentiments are echoed by the comments of Boart colleagues on the character and attitude of their chairman.  At a recent function, it was noted of Hilton Davies that 'he brought the group together as a family', that 'he is a man who inspired loyalty' and 'a friend to all employees'.  A common strand in these reports is the picture of a man who has a great zest for life, who enjoys meeting people and who possesses enormous stamina.

The career of Hilton Davies in Ireland coincides with the implementation of the First Programme for Economic Expansion that led a movement from protectionism towards an international profile for the country.  Seán Lemass spoke in 1961 of 'the vast dynamic of growth which is inherent in free private enterprise'.  This was the same year in which Hilton Davies moved to Shannon as manager of Shannon Diamond and Carbide, a Board/De Beers joint venture.  The growth of these companies in the Shannon Free Trade Zone testifies to the fruitful collaboration that Hilton Davies was able to develop; Shannon Development was built from the faith of such companies and the resources, technology and employment which they brought with them.

Hilton Davies stands shoulder to shoulder with the great pioneers of the Shannon phenomenon: men such as Dr Paul Quigley, Dr Brendan O'Regan, and Dr Tom Hallowell of SPS.  Shannon Diamond and SPS provided a critical mass to the fledgling Shannon industrial concept.  The sceptics of the time must now admit that the industrial methods, policies, procedures, and indeed ethos, promulgated by these pioneering industrial enterprises, contributed in large measure to a dramatic transformation of the region.  The young chief executives of these major firms, of whom Hilton Davies was one, and those who followed them, were exemplars for leaders of enterprise both locally and nationally.  Five years after the establishment of the Shannon plant, when he was in his mid-thirties, Hilton Davies returned to South Africa and was shortly to become sole managing director of the Boart Group and director of the Anglo American Industrial Corporation.  In 1994, after a further series of promotions, he became Executive Chairman of the Boart Group, now Boart Longyear.

In honouring Hilton Keith Davies today, the University of Limerick seeks to recognise the inspired leadership he has shown, his hard and determined work of support and development in enterprise and education and the many positive social and economic outcomes which have resulted from his initiatives.