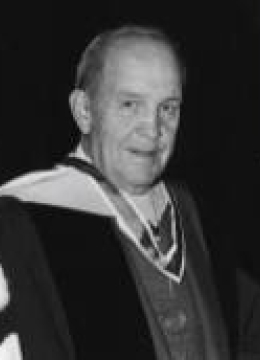 Dr H Thomas Hallowell became the first Honorary Member of the University of Limerick in June 1985.

An internationally recognised industrialist, inventor and philanthropist, Tom Hallowell devoted his entire professional life to the success of SPS Technologies.  He joined the Company after graduating with an Economics Degree from Swarthmore College in 1929 and rose from machine operator to President and ultimately Chairman of the Board in 1986.

During his leadership the Company developed from modest beginnings to become a leader in precision metal manufacturing of international proportions with plants in the USA, Germany, Japan, England, Australia and in Ireland at Shannon since 1959.

On his personal initiative, Tom Hallowell created a completely new approach in the field of manufacturing industry.  He identified needs and provided resources to meet them.  Tom Hallowell surprised all the "Doubting Thomases" by delivering on many novel approaches to manufacturing industry.  On the establishment of the SPS Company in Shannon he promised that he would be able to train young school leavers to tool room standards in a period of one year; this was to be achieved through the use of accelerated training within industry.  This happened.

His philosophy of "Total Quality Control" pervaded all the SPS plants worldwide.  What may be more important, he introduced the Louis Allen Management Development Programme into SPS and in the process produced a number of converts to the importance of management development for Ireland.  This eventually filtered into training centres such as the Irish Management Institute and promotion centres such as the Confederation of Irish Industry.

Tom Hallowell was constantly challenging those he cared about to do better.  Addressing the students here in 1985, when receiving special recognition he said "I don't want you to just do your best ... I want you to do it exactly right; how do you know what your best is?"

Tom Hallowell accomplished all that he ever wanted to do with his life.  He took every opportunity to leave things better than he found them.  He deserved well of Ireland and this University and stands out on all counts as a most worthy posthumous recipient of the highest academic honour this University can bestow.

I ask you to honour Thomas Hallowell (and his family) with the respect, gratitude, acclamation and verve that such a noble life deserved.

It is essential to recognise today social, charitable and personal contributions which have had a substantial and long-lasting impact on the well-being of what are commonly referred to as 'these islands'.