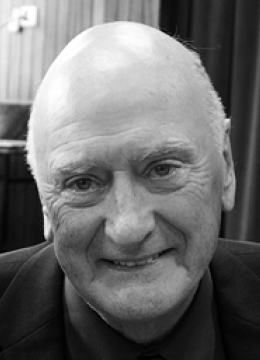 In this digital age, it is a pleasure to meet someone who still champions printed books and libraries. George Cunningham is such a person. With his strong belief in the enduring value of books, he must, no doubt, be pleased to see the current resurgence in book sales.

A scholar, educator, community advocate, antiquarian, historian, conservationist, naturalist, environmentalist, author, editor, publisher, bibliophile and philanthropist, George Cunningham has pursued a wide range of interests over the course of an active life. Throughout all his endeavours, he has had the dedicated support of his wife, Carmel, and their family.

In addition to publishing more than 100 books and articles, George has collected over 25,000 volumes but has given away more than three times that to schools and other institutions. Recipients of his books include Coláiste Phobal Ros Cré, the Tipperary, Offaly and Laois library services and the University of Limerick’s Glucksman Library.

Born in Roscrea in 1940, George Cunningham was awarded a secondary scholarship to St Flannan’s College in Ennis, County Clare. After graduating from St Patrick’s College, Drumcondra as a primary school teacher in 1961, he was appointed principal of Coolderry National School in County Offaly. George’s teaching deepened his interest in his home place. He soon became a community advocate and championed Roscrea’s built heritage, environment and tourism potential. He co-founded the Old Roscrea Society and later the Roscrea Heritage Society. In the 1970s, he launched the Roscrea People annual magazine and inaugurated the Roscrea Citizen of the Year awards. From 1977, for over 20 years, he and John Feehan ran the annual Roscrea Summer School of Local Study, which gave teachers valuable insights into the local environment. In 1980, he organised genealogical, architectural, environmental and folklore surveys of Roscrea and its environs.

Becoming fully aware of the Burren in the early 1970s, George’s passion for the region led to the publication of a series of books that explore the archaeological, historical and environmental heritage of the area. Along with the late Michael Greene and his wife, Mary Hawkes-Greene, George and Carmel established the annual Burren Spring Conference in 1991. Two years later, he contributed to the realisation of the Greenes’ dream of establishing the Burren College of Art in Ballyvaughan.

George Cunningham’s most enduring physical legacy in his native county is the preservation of Damer House, a Queen Anne townhouse built within Roscrea Castle in 1720. In poor condition by the 1960s, the house was destined for demolition until George successfully led a campaign for its preservation. He was instrumental in securing the assistance of the Irish Georgian Society, the Roscrea Heritage Society, private donations, government training schemes and the Office of Public Works to fully restore the house and open it to the public as a national monument.

Between 1980 and 1983, George Cunningham spearheaded the restoration of Damer House Annex as the Roscrea Heritage Centre, the first such centre in Ireland. Subsequent campaigns led by George resulted in the restoration of Roscrea’s round tower and the procurement of a safe exhibition space for a ninth-century pillar and a twelfth-century High Cross. His research on the south-west midlands of Ireland earned him an M.Litt. (Master of Letters) from Trinity College Dublin in 1985; his thesis, entitled The Anglo-Norman Advance into the South-West Midlands of Ireland, 1185–1221, was published in 1987. George’s lifelong interest in the round tower culminated in 2014 with the publication of the much-acclaimed book The Round Tower at Roscrea and Its Environs. George continues to campaign for improving the environmental setting of the round tower and the adjacent Romanesque west gable of St Cronin’s Church.

Following his retirement from teaching in 1987, George became more active than ever in his scholarly pursuits. For example, that very year, he founded what is arguably his greatest intellectual legacy – the Roscrea medieval conferences. These twice-yearly gatherings brought together national and international scholars in Mount St Joseph Abbey to present on learned aspects of Early Christian Ireland and the later Middle Ages. The conferences gave rise to three publications, the second of which, A Carnival of Learning, was a festschrift of essays edited by Peter Harbison and Valerie Hall to honour George’s work.

George Cunningham’s contribution to the University of Limerick has been immense. Always a staunch supporter and promoter of the university, he served on the UL Governing Authority from 1992 to 2009 and fulfilled the role of deputy chairperson from 2003 to 2007. His association with UL led to another of his notable legacies. As chair of the Library Development Committee and a member of the Library Building Committee, his campaign to champion the library’s expansion culminated in the opening of the 9,170 square-metre Glucksman Library in 1998. He then began to fill the library with special collections to promote research. He was responsible for the acquisition of the antiquarian libraries of Eamonn Norton, Fr John Leonard and Ciarán McAnally and was influential in securing the personal papers of the writer Maurice Walsh and the Armstrong Family of Moyaliffe Castle, County Tipperary. George was also a member of the initial design team for the redevelopment of the Glucksman Library – an inspiring, 15,000 square-metre facility due to open in early 2018.

It is appropriate to end on a bibliophilic note. Most recently, the Glucksman Library has taken into its care the Bolton Library, the restoration of which George Cunningham staunchly and tirelessly campaigned for many years. George first became aware in the early 1990s that this Cashel-based antiquarian collection of 12,000 early-printed books, maps, manuscripts and prints – many quite rare – was in a perilous condition. After suggesting in 1994 that UL assist in the library’s preservation, he joined the Bolton Library’s Board of Management and was instrumental in securing funding for the library from many sources. Although he secured government support in 2010 for the library to be preserved in Cashel, the economic collapse at that time prevented the plan from coming to fruition, and in 2016, the Bolton Library was moved into the Glucksman Library for preservation and ongoing restoration.

George Cunningham’s contributions to heritage, conservation and education have already been recognised in his election in 2008 as a Fellow of the Society of Antiquaries – a rare honour for an Irishman – and in the award in 2010 of an honorary Master of Arts by the National University of Ireland, Galway. For his outstanding career of scholarship, heritage preservation and community activism and for his invaluable contribution to the University of Limerick, it is fitting that UL should also honour George’s lifelong achievements, and we are delighted to do so today.