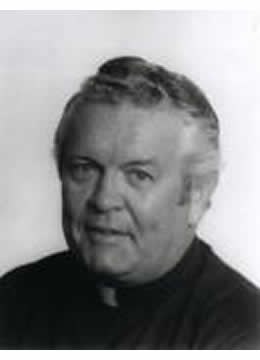 Fifty years ago Aengus Finucane left the Christian Brothers School, Sexton Street, Limerick to begin his studies in Philosophy, Teaching and Theology.    Father Finucane was ordained as a Holy Ghost priest in 1958.  In those fifty years, Father Finucane has devoted his robust energies, honed and hardened by the rugby fields and swimming pools of Limerick and Clare, to the spiritual and material nourishment of the world's disadvantaged peoples.

In his first assignment as Diocesan Director of Catholic Action in Nigeria and Parish Priest of Uli, Father Finucane found himself involved in the bitter civil war between Nigeria and Biafra.   An emergency airstrip in the parish of Uli was widened in order to take up to forty flights of relief supplies a night.  Father Finucane and his parishioners unloaded and distributed these essential goods in conditions of extreme danger.  "Uli was bombed every day," Father Finucane recalled, "but the Biafrans were lined up in the forest with truckloads of gravel . . . to fill the holes in the runway."

From these experiences of hardship, suffering and conflict, Africa Concern, a loose coalition of Methodist and Catholic missionaries, lay workers and others was formed in that year; Concern Worldwide, now a major charity organisation employing 5000 expatriate and local staff, was built from this initiative.

With Concern, Father Finucane moved to Libreville, Gabon in 1969 and continued his aid mission with Biafran refugees.  His first major appointment with the fledgling organisation was as Field Director in Bangladesh working amid a population he remembers as "people who care about people, who make a cheerful giving even of themselves."   Work in Thailand and Uganda followed Bangladesh and Father Finucane gave much of himself in these stricken places.  His faith survived the sight of the desperate refugee camps of Kampuchea and the terrible knowledge that one third of infants born in even the best Kampala hospitals were HIV positive.  And it is a tempered and sobered faith that emerges in his credo, "we have a strong inclination to do evil, and you have to fight like hell to do any good".

A memorable poem, penned by an American nun is dear to the heart of this concerned priest.  It is addressed to "Dear Father Gus,"and tells of the good that one person saw - "You seem to crack the hard little shells that hold us in and say: 'COME ALIVE - BE HAPPY - NOT TO WORRY.'  This is a wonderful gift and the mystery becomes a clear reality.  It is the mystery of love."

In 1981, Father Finucane was appointed Chief Executive of Concern Worldwide, a post he held until 1997.  He travelled across many of the world's disaster areas of the last twenty years and witnessed the horrors of Rwanda at first hand.   His common-sense call to stop people "drifting into urban environments where there is nothing for them" by providing free access to markets has yet to be heeded.   In 1997 Father Finucane became Honorary President of Concern Worldwide US, a post he holds at the present time.  In 1995 he was awarded an Honorary doctorate of laws by the National Council for Educational Awards.

It is fitting that the University of Limerick confer an honour of this kind on one of Limerick's most distinguished sons.  Father Finucane gained his love of hurling and rugby in this city and remains proud of having hurled for Treaty Sarsfields in the Limerick County Minor Championship.  "He was never fit but he knew how to use his weight" commented an old rugby friend.  His enthusiasm for the sports field was amply demonstrated in his days as a young teacher at Rockwell College in the 1950's.  Like so many Limerick youngsters, Father Finucane swam at the Tailrace and in the Pollock Holes and Burns Cove of Kilkee; today, staying true to his favourite mottoes - 'Be adult but stay young' and 'These days and nights will never come again' he continues to swim, often visiting the Forty Foot near to his Dublin home.

Father Finucane's rich and varied life has been lived in the service of others and of God.  And it is appropriate at this time to remember the words of St Paul:

"And now abideth faith, hope, charity, these three:  but the greatest of these is charity."