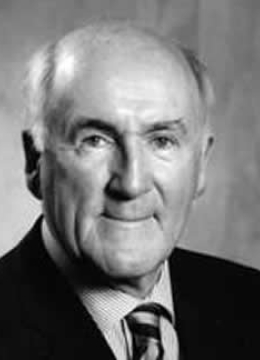 Eddie Keher is honoured today for his extraordinary contribution to the sporting life of Ireland. The University of Limerick is proud to mark the achievement of this remarkable hurling legend who is also well-known for his work with young people and in humanitarian causes.

Eddie Keher comes from Inistioge, Co. Kilkenny and fondly recalls days of practice in the village square - "The older guys used to hurl there. Then, when they were gone, we'd come out and try to hurl. That was my first real introduction to hurling."

On the 6th September 1959, Eddie Keher played for Kilkenny in the minor All-Ireland final; that same day the seniors drew with Waterford and the replay was scheduled for 4th October. In those four weeks, Eddie Keher moved from minor to senior, made his full senior debut, and appeared in his first All-Ireland senior final - a remarkable achievement for a 17-year old.

In a hurling career that lasted from 1959 to 1977, Eddie Keher won six All-Ireland medals with Kilkenny. He played in nine All-Ireland hurling finals and holds the record for scoring in these finals with an aggregate score of 93 points. His 9 Railway Cup medals constitute a Leinster record and he garnered five successive All-Star awards from 1971 to 1975. Between1963 and 1976, he was the leading points-scorer in the hurling championship eleven times, truly an enviable achievement by an amazing player. He was voted Hurler of the Year in 1972.

No discussion of hurling in Limerick is complete without reference to the famous 'Umbrella All-Ireland' Final against Kilkenny in 1973, a Limerick victory in which the non-playing members of the Kilkenny team are often claimed to have played a part. The Kilkenny argument - that with a full side they would have had too much class for Limerick as shown by their Leinster final winning performance over Wexford a few weeks previously - was made by Eddie Keher when he claimed that "had Kilkenny played as they did in the Leinster final they would not have been beaten". Alas, with the absence through injury of Eddie Keher, Kieran Purcell, Jim Treacy and Eamonn Morrissey from the Kilkenny team, it was not the same side. Jackie Power and Mick Mackey strongly put the opposing case - "... the way Limerick played on All-Ireland day they would have beaten any team. Here you had fifteen men who went out with one aim and one aim only..."

One of the abiding images from that final was that of a rain-sodden, dejected on-looker - Eddie Keher - urging on his colleagues in the black and amber, against the might of the men in green, including the Eamons (Cregan and Grimes, team captain), the Bennises and the Hartigans - Limerick were not to be denied that day!

Today Limerick holds out hands of friendship and respect to Eddie Keher: there is no doubt that his astonishing record as a points-scorer was sorely missed on that day and the University wishes to honour and celebrate his fame as a player and sportsman over almost two decades, one who has brought credit to the national game and to Ireland throughout his career.

Eddie Keher sees hurling as a creative activity that requires inspiration and teamwork as well as dedicated practice and hard-earned skill. He comments, "As long as All-Irelands are won and teams are great because they have that individual as well as collective flair, and as long as style wins over robust tactics, then I think the game will live forever and will always be as great as it is now".

Eddie Keher was a founding member of the No Name Club along with Father Tom Murphy and Garda Eamonn Doyle. The organisation was established in 1978 and is devoted to providing alternative venues to public houses for young people and which now has about 30 branches across the country. The Club recognises the potential which both adult example and an enlightened peer group have to influence others; it seeks to allow young people to grow up with dignity, self-esteem, at ease with themselves and others, to establish a social context where adults demonstrate through example that alcohol is of minor importance in socialising, enjoyment, popularity and fun. The activities of each club can provide services for anywhere between 300 and 600 young people in their local area. "The No Name Club is a jewel," commented Superintendent Martin Lee of the Claremorris Gardaí, "There was a gap and this club has bridged that gap.... The Irish pub theme has been promoted worldwide with the idea that it's the place to be. The No Name Club provided the alternative". Eddie Keher remains an active member of the No Name Club as the Club's National Development Officer and is a member of the National Executive as National Treasurer.

Eddie Keher is also a patron of Goal, the international humanitarian organisation. He has given his time, energy and public profile to highlight the work of Goal and takes an active interest in the work of this charity.

In the Millennium year, 2000, Eddie Keher was among the 30 living GAA sportsmen chosen to appear on the Irish special commemorative postage stamps. He also had the distinction of being one of the few hurlers from the "modern era" selected on the GAA's Centenary Team in 1984.

In the last ten years, Eddie Keher has made a major contribution to the development of the University of Limerick: the National Coaching and Training Centre and the University Arena have both gained much from his knowledge of the world of Irish sport. He was a member of the Board of the National Coaching and Training Centre from 1995 until 2000 and was appointed Chairperson of the Board of the University Arena in 1999. His guidance and professional expertise have made an immense contribution to the development of these facilities.

President, I present Eddie Keher to you and ask you to confer him with the Honorary Degree of Doctor of Science.