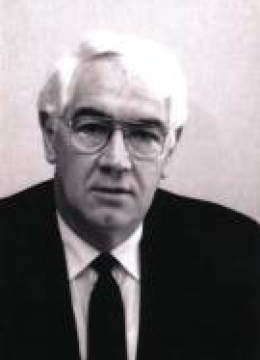 Dr Tom O'Dwyer has, for almost forty years, provided a splendid record of public service to Ireland and to the European Community.   His career as a civil servant with particular interests in Agriculture, Education and Marketing encompasses a time that has witnessed dramatic change in this country.   Of Tom O'Dwyer, it was once said, 'this is the man who took the donkey and cart out of the Irish Dairy Industry'; his contribution to the modernisation and development of Irish agriculture in a European context is among the several reasons for which the University honours him today.

In 1963, after two years with the recently founded Agricultural Institute in Dublin, Tom O'Dwyer moved to Cornell University to undertake postgraduate work.  His specialist research on Irish Dairy Manufacturing Plants led to the award of a Doctorate in Marketing and Business Management in 1968 and Dr O'Dwyer returned to the Agricultural Institute, Dublin in that year.  His status as an expert in the agricultural domain was strengthened over the following years by a succession of significant posts.  He became Head of the Marketing Department at the Agricultural Institute, keynote speaker in 1970 at both the World Dairy Congress in Sydney and the British Geographers' Conference in Belfast; President of the Agricultural Economics Society and Visiting Lecturer at University College, Dublin.

Tom O'Dwyer's European career took shape in 1973 when he was appointed Head of the Dairy Division of the Commission of the European Communities with responsibility for all aspects of Milk and Dairy policy.  Commissioner Michael O'Kennedy appointed Dr O'Dwyer as his Chef de Cabinet in 1981; later that year he became Director of Livestock Products at the European Commission, an area of vital significance in relation to Irish agricultural output.

In 1989, Commissioner Ray MacSharry selected Tom O'Dwyer to act once more as Chef de Cabinet and, in the following year, he was appointed Director-General for Co-ordination of Structural Policies and a Member of the Board of the European Investment Bank; a member doubtless aware of Gibbon's maxim that, 'all taxes must, at last, fall upon agriculture.'

In 1993 and 1994, Tom O'Dwyer's distinguished European career was crowned by several prestigious posts.  He became Director-General for Education, Training and Youth in 1993; in 1994 he was selected as President of the Board of the European Centre for the Development of Vocational Training and first President of the European Foundation for Vocational Training.  One indication of the importance of these posts lies in a meeting Dr O'Dwyer chaired in Brussels. Over 80 delegates from 44 countries  - representing almost 900 million people - were present.

The National University of Ireland recognised the major achievements of this champion of Irish agriculture in 1995 when he was awarded an Honorary Doctorate of Laws at University College, Dublin.  Later that year he was selected as a member of the Delors Task Force on the Peace Programme for Northern Ireland.  He is also a member of the Board of the College of Europe in Bruges.

Dr O'Dwyer remains committed to the causes of Education, European affairs and Irish agriculture perhaps agreeing with the mellow wisdom of Daniel Webster:

'when tillage begins, other arts follow.  The farmers, therefore, are the founders of human civilisation'.

In his retirement from the European arena, Dr O'Dwyer remains a busy man, a living proof of the adage that, 'there is life in the ground; it goes into the seeds; and it also, when it is stirred up, goes into the man who stirs it' (Charles Dudley Warner).    In 1998, he was appointed Chairman of Teagasc and, in the following year, Chairman of the Monitoring Committee on Beef.  He is also Chairperson of the Heritage Council of Ireland.