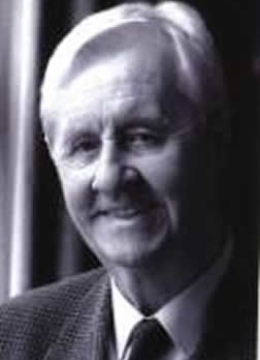 The University is proud to honour today a Limerick man who has devoted his life to public service.  Dr Donal Nevin began his career in the Department of Industry and Commerce and then joined the Irish Congress of Trade Unions.  He gave forty years service to this body and from 1982 to 1989 was General Secretary of the Congress.

Dr Nevin has frequently volunteered his time to assist the State in its development of policy on a wide range of issues.  He served on the Broadcasting Review Committee and the Commission on Remuneration and Conditions of Service in the Defence Forces.   He has served twice on Taxation Commissions and, between 1993 and 1996 was a member of the Expert Working Party on the Integration of the Tax and Social Welfare System; he was also a member of the Working Party on the Occupational Training of the Handicapped.

In his edited book, Trade Union Century (1994), Dr Nevin quotes the stirring 1959 manifesto of the Irish Congress of Trade Unions:

'Our movement can now take its proper place in the nation's life, concentrating its undivided endeavours towards the achievement of working-class ideals and aspirations . . .trade unionism has been . . . the most potent instrument for winning dignity, self-respect and freedom for the workers'.

That the Irish Congress has been able to move so quickly towards the achievement of these goals has been due in large part to the guiding hand of Dr Nevin. His steady commitment to these ideals has been demonstrated through his readiness to join a large number of national and international committees and foundations which address the issues involved in moving towards a fair and just social partnership.  Such bodies as the Combat Poverty Committee, a committee to which he is especially committed, the Irish National Productivity Committee, the Steering Group of the Irish Council of People with Disability and the European Social Fund Committee have benefited from Dr Nevin's membership.  He has contributed to the Health Research Board, the Higher Education Authority and the National Roads Authority.

He has also been involved with voluntary organisations, often in the capacity of officer. He has acted as a trustee of the Bewley Community, Governor of the Irish Hospice Foundation, Patron of the Irish Anti-Apartheid Movement, honorary president of the Irish Labour History Society and Treasurer of the People's College Adult Education Organisation.

This scholarly work, which can readily be seen as an extension of Dr Nevin's practice as socialist and trade unionist, documents the complex history of these institutions in the last century.   'Labour and the Political Revolution', a Thomas Davis lecture of 1967, deals with the post-Treaty fortunes of the Labour Party.  In an incisive analysis, Dr Nevin draws out the implications of Labour's uncertain policy on the Treaty.  A later essay, 'Industry and Labour' seeks to explain the difficulties facing the Labour Party in the years 1939-1951.   In his most recent edited work, James Larkin. Lion of the Fold, Dr Nevin returns to the subject of his first published work.   His comments on Larkin demonstrate a deep respect for the qualities of Larkin and are especially pertinent today:

'His socialism was in large part a great humanitarian love of his fellows, an acknowledgment of the brotherhood of man, a hatred of injustice . . .'

The relevance of these sentiments lies in the qualities of the man whom we honour today.  Dr Donal Nevin possesses a generosity of spirit, strong socialist and trade union commitments, scholarly achievement and a marked sense of social responsibility.   This award represents recognition by the University of Limerick of these qualities and of their importance in the continuing history of the development of the State.

Currently Dr Nevin's positions include Council Membership of the National Theatre, Membership of the Executive Council and Executive Committee of the Economic and Social Research Institute; he is also a Trustee of Focus Ireland, Vice-Chairman of the Irish Times Trust Ltd and Vice-Chairman of the Irish Times Ltd.  He continues to work as writer, broadcaster and lecturer.