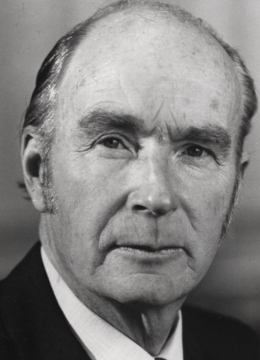 It is fitting that the President of Ireland should be the recipient of the first honorary doctorate conferred by the University of Limerick, the first University created by the State since its foundation.  It is a happy coincidence that the holder of this illustrious office is Dr Patrick Hillery, for in his career in public life his policies have to a significant extent encapsulated the objectives and direction taken by this University.

A medical doctor by profession, His Excellency entered politics in 1951 as a TD for his native County Clare.  His first ministerial post was Education, which he held for almost six years.  This was followed by a short period as Minister for Industry and Commerce before he became Minister for a newly constituted Department of Labour.  In 1969 he was appointed Minister for External Affairs.  With Ireland's entry into the EEC in 1973 he was nominated as the first Irish Commissioner and was made Vice-President of the Commission.  In 1976 he became President of Ireland, the office which he still holds.

Appointed Minister for Education in June 1959 he soon showed himself as a reforming pragmatist, aware of the changing needs of Irish education but conscious too of the necessity of carrying colleagues, the Dáil and the country with him in implementing the reforms he saw as being both necessary and desirable.  He injected new life into the teaching of Irish by giving much greater importance in the schools to oral Irish.  He set up the Building Unit in the Department of Education, a little noticed but highly important development, and he introduced school television, starting off with programmes in Science.  He established the comprehensive schools, brought technical subjects into the Leaving Certificate curriculum and announced the creation of the Regional Technical Colleges.

This brief and selective summary cannot do justice to Dr Hillery's achievement in chipping away the complacent foundations on which the Irish educational system then rested but it is an indicator of a climatic change in educational policy, a change which led, logically if not inexorably, to the opening of NIHE, Limerick in 1972.

By this time Dr Hillery was a major participant in what was to be one of the most important events in our history, entry into the European Economic Community.

Given the responsibility for the Irish negotiations for entry, he carried these through in an imperturbable, confident and dignified manner.  And he achieved, for the country, very favourable terms of entry.  His tenure as Minister for External Affairs witnessed, too, as had his period in Education, the emergence of his department as a major force for development.  In the longer historical perspective he will be forever associated with Ireland's entry into the European Community and the widening national and international horizons that event has brought about.

On his joining the Commission in Brussels, the portfolio given to him, Social Affairs, was a difficult and less than glamorous post but in his usual urbane and methodical way he succeeded in doing for the less advantaged social groups of the Community what he had done previously for the same sector in Irish society.  In Brussels he took up the cause of migrant workers, who were so dependent on the economic health of the states in which they worked.  The body of laws protecting migrants from the worst consequences of factory closures owns much to his advocacy and patient planning.  There were numerous other changes for which he was responsible, perhaps the most significant and that with the widest application being the enforcement of the directive on equal pay for women.

Before his term of office as Commissioner had expired he became President, on 9 November 1974, and he graces that office to this day.  As President, Dr Hillery while playing his full constitutional role, has made it his habit to keep his finger on the pulse of our national life, in all its diversity.  Rarely does a day pass but one sees his photograph at those functions at parish and county level where the real lives of Irish people take place.

When one looks back on his career there is, for all its diversity, a single thread running through it.  His primary vocation as a healer has never really changed.  Only the type of body on which he has lavished his healing skills has varied.  From his first patients in Canada to later patients in Dublin and in his home town of Miltown Malbay, from his progression to various departments of state to his commissionership in Brussels, he was ever the healer, the binder of wounds, the therapist.  And all were favoured in finding themselves under his care.

Finally it is also fitting that this ceremony should take place in the Jean Monnet Lecture Theatre, for it is clear from Dr Hillery's writings and lectures that he has been greatly inspired by Jean Monnet and his vision of a European Community.  That vision this University has been expounding since its opening in 1972.