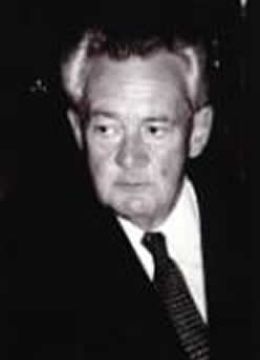 The University of Limerick today honours a man who has been one of the most influential figures in Irish public life in over three decades.  Desmond O'Malley is the most significant political figure whom Limerick has produced since independence.

Desmond O'Malley's family has been at the cutting edge of political discourse for almost a century.  His maternal grandfather was killed during the war of independence by the Black and Tans.  Two of his uncles and his father held the office of Mayor of Limerick.  His uncle, Donogh O'Malley, as Minister for Education was a seminal figure in the development of Irish education and was responsible for much of the work that led to the foundation of this university.

Des O'Malley succeeded his uncle by being elected to Dáil Éireann in 1968.   In all, he was returned as a TD by the people of Limerick at eleven successive elections. He represented the city and county for thirty-four consecutive years, and he served in four different governments, holding a range of senior ministerial portfolios.  In that period he fundamentally altered the justice, economic development and political landscape of Ireland.

He contributed enormously to the industrial development of Limerick and the Mid-West region and he has been both a good friend and has had a key influence in the development of this university.  This is a distinguished record of public service by any standards.

Entering national politics at a time of great turbulence, Des O'Malley progressed rapidly and was elevated to the position of Minister for Justice in 1970 at the incredibly early age of thirty one by the then Taoiseach, the late Jack Lynch, who was to become O'Malley's mentor. This was at a time of much turmoil in the Troubles in Northern Ireland, which gave rise to many serious and complex issues facing the State in responding to the civil, religious and political conflicts attendant upon them.

It was a testing time to serve in government and it was a particularly testing time to hold the sensitive post of Justice Minister.  It was a time when those who administered justice were at personal risk from those who would seek to undermine the institutions of the State.  As Minister for Justice Des O'Malley displayed the qualities of courage, tenacity and determination that would later become the hallmarks of his entire career.

Des O'Malley went on to serve in several different government departments. His forte was economic policy and he had a passionate commitment to the industrial development of his country. As Minister for Industry and Commerce he played a key role in bringing job-creating foreign investment into Ireland and into Limerick and the Mid-West region.

In the late 1970s his ministerial brief included responsibility for the electricity sector. This was perhaps appropriate for a man renowned in political circles for possessing a short fuse and an ability to make sparks fly.

The O'Malley name is synonymous with the development of education not only in Limerick but in Ireland. The late Donogh O'Malley was the pioneer of free second-level education in Ireland in the 1960s.

Des O'Malley himself recognised the vital importance of education in the life of city and country. He saw the huge role which a new university could play in the social, cultural and economic development of Limerick and the Mid-West region. And he used his great political influence to help secure the foundation of the University of Limerick and to assist it in its ambitious development programme in subsequent years.

His involvement first became active when he was appointed Minister for Industry and Commerce in 1977.  In 1981 he directly ensured that state funding was provided for the 17,000 square meters Phase 1B Building.  This was given at a time of major cuts in public spending.  He ensured that the project was protected from government cuts and could proceed to construction stage.

This project was of major significance to the then National Institute for Higher Education's advancement.  It doubled the teaching and research facilities of the young Institute.

It increased enrolment capacity from 1500 to 3200 full-time students and provided a wide range of advanced laboratories.  It set the foundation for the NIHE to advance to university status.

In 1989, following his return to Government, the University of Limerick made a submission to him for funding support related to the research segment of the Foundation Building.  He became very active in ensuring that state funds were made available to part match the generous funds which private donors were providing.  Des O'Malley was rigorous in evaluating submissions for support, which he received as Minister.  However, he always provided encouragement and wise counsel and if he considered a proposal good value for money and in line with government policy, he responded actively and speedily in providing the appropriate funding.

Des O'Malley also played a critical role in the development of the National Technological Park and the Innovation Centre.  This confirmed his support of this university's commitment to being pioneers in forging strong linkages between academia and industry.  Also, under his jurisdiction the President of first the NIHE, then the University, was appointed to the board of Shannon Development, a tradition that continues to this day.

Confronted by significant political difficulties, Des O'Malley had the courage and determination to take the lead in the formation of a new political party in 1985, when the Progressive Democrats were established. As leader he took the party into coalition government within four years of its foundation.

He succeeded in changing the face of Irish politics, ensuring that apart from a brief two-year interlude Ireland has been governed by coalition administrations ever since.

One of our most noted parliamentarians, Des O'Malley was well known in Dáil exchanges for his brilliant intellect, his acerbic wit and his caustic comments on the events of the day. A passionate believer in parliamentary democracy, he played his part in ensuring that our national debating chamber was a vibrant stage for the airing of legitimate political differences.

The evolution of Des O'Malley's ideals are reflected in the progression in Irish society over the last thirty years.  The development of Ireland into a more pluralist and inclusive society has not been without difficulty, particularly where old certainties and beliefs have been questioned.  In his famous speech "I stand by the Republic", to Dáil Éireann on the 20th February 1985, Des O'Malley addressed these concerns by putting forward the view that the right to hold strong beliefs, religious or otherwise, was compatible with the development towards a pluralist society. He quoted from an address by New York Governor, Mario M Cuomo at the University of Notre Dame, Indiana on 13th September 1984, as follows:

"We can be fully Catholic; clearly, proudly, totally at ease with ourselves, a people in the world, transforming it, a light to this nation.  Appealing to the best in our people, not the worst.  Persuading not coercing.

Leading people to truth by love and still, all the while, respecting and enjoying our unique pluralistic democracy.  And we can do it even as politicians".

Des O'Malley then went on to outline his own belief that:

"In a democratic republic people should not think in terms of having laws other than those that allow citizens to make their own free choice.  This is what I believe a republic should do.  It should take account of the reasonable views of all groups, including all minorities, because if we do not take into account the rights of minorities here, can we complain if they are not taken into account...anywhere else?"

Those views are as valuable and relevant today as they were seventeen years ago.

Outside of politics and public service, two of his other great passions in life have been rugby and horse-racing.  As a schoolboy he played hooker for Crescent College and has remained a lifetime supporter of Old Crescent R.F.C.

Indeed, it was not unknown that a busy international ministerial schedule should be altered to facilitate attendance at a key Old Crescent match.  In recent times he has also become something of a success as a horse-racing pundit on television.

Des O'Malley retired from Dáil Éireann in 2002.  In July of this year he took up the post of Alternate Director with the European Bank of Reconstruction.

The late John F Kennedy spoke four decades ago of how the holders of public office would be judged by history. Addressing the Massachusetts state legislature as president-elect in January 1961, he gave his four key criteria:

Desmond O'Malley has satisfied all four criteria through an extraordinary and distinguished career of public service.