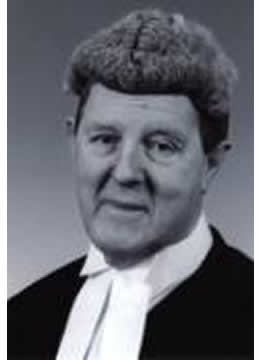 The Hon Mr Justice Dermot P Kinlen, retired Judge of the High Court, represents the best qualities in the Irish judiciary and legal profession. Having distinguished himself as a student at University College Dublin, he was called to the Bar in 1952 and took silk in 1971. He was also called to the Bar in England and New South Wales, and is a Fellow of the Chartered Institute of Arbitrators.

Judge Kinlen has enjoyed a distinguished career at the Bar and on the Bench. His keen analytical mind and extensive knowledge made him one of the most eminent Senior Counsel in the country. His well-deserved elevation to the Bench brought his considerable learning to one of the most difficult occupations, that of a High Court judge, a calling which deals with complex issues of fact and principle in often harrowing circumstances. In all this work, he has performed with an aura of gentle humanity and humour that has earned him the respect of colleagues in legal communities at home and abroad.

Judge Kinlen's career is one characterised by a commitment to justice, not only for the average citizen but especially for the most needy and, in particular, for the incarcerated. His belief that prisoners are entitled to basic standards of decency, combined with an emphasis on rehabilitation rather than punishment, mark Dermot Kinlen as a man of vision and compassion. Throughout his career, he has never lost sight of the inherent value of the person, regardless of wrong turns he or she might have taken in life. This pioneering and committed spirit has meant that his efforts on behalf of prisoners are highly regarded by civil libertarians and criminal justice groups alike.

Judge Kinlen brought this vision to bear in his service as a member of the Visiting Committee of St Patrick's Institution for Juvenile Offenders from 1971 to 1990, and as chairman of the Visiting Committee of Mountjoy Prison from 1990 to 1993 (a position he gave up upon his appointment to the Bench). He also was a founding member of PACE, Prisoners' Aid through Community Effort, which has established hostels and facilities to assist in the reintegration of ex-offenders. On his retirement from the High Court this year, he accepted the appointment as the State's first Inspector General of Prisons and Places of Detention. This appointment recognises his long-standing commitment and heralds a new approach to the supervision of prison conditions in Ireland.

Judge Kinlen is also a true internationalist. His desire to play a role in the opening of China to the world was fulfilled through his work with the Chinese judiciary and legal profession, and it is an achievement unequalled in this country. Since then, he has engaged with enthusiasm in Sino-Irish relations.  He first visited China in 1977 with the former President of Ireland, Cearbhall Ó Dálaigh; and he was subsequently involved in establishing diplomatic relations between the two countries. He has served as President of the Irish-Chinese Cultural Society and has visited China on many occasions. In 1998, he led a delegation of Irish judges to China to share their thoughts on human rights and judicial independence with their Chinese counterparts. These contributions have been officially recognised by the conferring on him of an award by the People's Republic of China.

Judge Kinlen's international reputation goes even further. In 1990, the British and Irish governments nominated him as a Deputy Judge of the Court of Appeal of the OECD in Paris. He has been re-appointed on the expiration of each three-year term of office, and he remains on that Court to this day.

Judge Kinlen is proud of his association with Limerick and with the University of Limerick. At a time when others were dismissive of the idea, he believed that the city should have its own university. He was chosen by the Limerick University Project Committee to assist in the preparation of its submission and to lead its subsequent presentation in oral hearings to the Commission on Higher Education in the early 1960s. That submission eventually bore fruit, and his efforts were a vital step in the establishment of the University of Limerick. It is worth noting that he gave of his efforts freely and acted without remuneration and he proudly wears the watch presented to him in recognition of his service by the Limerick University Project Committee.

Judge Kinlen's connection with the University of Limerick continues today. He is often heard to speak of the University of Limerick as his university, and he is always a proud advocate of its achievements. More immediately, he now serves as Chairperson of the Advisory Board to the School of Law, which under his careful stewardship has proven to be a valuable source of ideas and encouragement.

We should not forget Judge Kinlen's ties to the entire Shannon region. As junior counsel, he practiced on the South Western Circuit, encompassing the Counties of Clare, Limerick, and Kerry; and to this day he stays in touch with his colleagues in the area. He is hugely proud of his Kerry origins (his mother was an O'Donnell from Kerry); and from his second home in Sneem, he entertains guests who have included distinguished international visitors and former Presidents of Ireland.

areer, Judge Kinlen has chosen the road less travelled. He has devoted his life to the service of others and is a man of immense charity. He is a courageous defender of the rights of the dispossessed and marginalised. He has worked long and hard for the nation, both at home and abroad; and his international service and status have brought honour and respect to Ireland. Throughout his life, his passion and thirst for justice have shone brightly, to all.

There is no idea so uplifting as the idea of service to humanity.