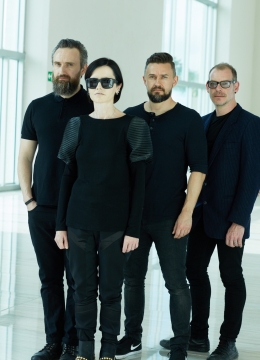 Possibly one of the lesser-known facts about The Cranberries is that the band began life as The Cranberry Saw Us. What is better known is that all members of the group are indelibly associated with Limerick: vocalist and songwriter Dolores O’Riordan, guitarist and songwriter Noel Hogan, bassist Mike Hogan (Noel’s brother) and drummer Fergal Lawler. The Cranberries’ early Limerick performances in 1990 included gigs at The Flag Café, Broad Street; Ruby’s Nightclub in Cruises Hotel and the Stables Bar at the University of Limerick.

Today, 29 years later, we are delighted to welcome Noel, Mike and Fergal back to the campus to acknowledge and honour their phenomenal achievements in the music industry and to mark the life and work of their friend and sister in music, Dolores O’Riordan.

Renowned for their trademark ‘Indie’ guitar sound and distinctive Celtic-tinged lilting vocal style, The Cranberries’ rise to fame in the early 1990s was nothing short of meteoric. Released in 1993, their debut album, Everybody Else Is Doing It, So Why Can’t We?, sold over five million copies in the USA alone and was number 1 in several countries, including the UK. With the release of four more albums – No Need to Argue, To the Faithful Departed, Bury the Hatchet and Wake Up and Smell the Coffee – and numerous number 1 singles, including Linger, Dreams and Zombie, the band achieved significant commercial and critical success around the world over the course of the next ten years.

Dolores O’Riordan made a unique contribution to popular music. Her distinctive voice carried resonances from her experiences of church singing, her school choir, country and western, traditional Irish ballads and songs in both Gaelic and English. Dolores’s voice carried strong traces of the ‘Sean Nós’ (old style) Gaelic tradition of unaccompanied singing that so beautifully conveys sadness, regret and loneliness.

Between 1994 and 2004, The Cranberries repeatedly toured the world and played to crowds in excess of 18,000. On their 1995 tour of the UK and continental Europe, the band performed for over 500,000 people. As well as instantly recognising their distinctive sound on the radio, chances are that everybody here today has felt that little surge of pride when hearing a Cranberries track in a movie – Prêt-à-Porter, The Next Karate Kid, Clueless, Boys On the Side, Mission Impossible, You’ve Got Mail – or a television series – Beverly Hills 90210, Malibu Shores, Charmed, The Sopranos. Not surprisingly, their songs have also been used by Bord Fáilte to promote Irish tourism, and in August of last year, Dreams was played to welcome the victorious Limerick Senior Hurling Team back to the city.

In 2009, following a five-year period in which they took time out to pursue individual projects, The Cranberries reunited to perform on the occasion of the induction of Dolores O’Riordan as an honorary patron of Trinity College’s Philosophical Society. Having enjoyed the experience so much, the band embarked on a sell-out world tour and subsequently went on to record a sixth studio album, Roses, in April 2012. Later that year, The Cranberries performed in China, Japan, The Philippines, Australia and New Zealand as well as continental Europe, the UK and the USA, and in 2016, they played a series of sold-out European shows in Poland, France and Switzerland. As a measure of their continuing popularity, the band has over four million followers on Facebook and over two million listens per month on Spotify. Eight of the band’s singles are listed in the prestigious Modern Rock Track charts and, to date, four of their six studio albums have been in the Top 20 US Billboard charts.

The Cranberries are strongly associated with Limerick. With sales in excess of 40 million records worldwide, the band has contributed significantly to the local economy and cultural industries. They located their international business operations here and have quietly contributed to the civic life of the city of Limerick and its environs through numerous charitable activities. Individual band members have mentored younger and less-experienced musicians in the region, working with them as producers, sharing their vast knowledge of the music industry and providing them with recording infrastructure. Perhaps the greatest manifestation of The Cranberries’ dedication to their hometown was seen in their performance as the headline act at the opening of the Special Olympics in Thomond Park in 2010. On that evening, Dolores O’Riordan told the 22,000-strong audience that anything is possible if you have a dream. She said that The Cranberries had a dream when they started the band as teenagers 20 years ago in Limerick and that they never stopped following that dream.

In early 2017, The Cranberries recorded Something Else with a string quartet from the Irish Chamber Orchestra in the ICO studios at the University of Limerick. The album featured string arrangements of the band’s classic songs as well as new compositions. The seeds of this special collaboration were sown when Dolores was accompanied by the ICO in an exhilarating performance on New Year’s Eve 2013 at Merchant’s Quay to launch Limerick City of Culture 2014.

The Cranberries have many earlier connections with the University of Limerick. As well as their gigs at the Stables, it was at a Students’ Union concert in Limerick that they were offered a multi-million-pound recording and publishing deal with Island Records. In 1995, they performed in the Foundation Building at the Limerick launch of ESAT Digifone, and their major Irish homecoming concert was organised by the Students’ Union. More recently, Noel Hogan lent his support as a participant at the UL-organised symposium on the singer Morrissey and has contributed to a collection of scholarly essays edited by the university’s Popular Music and Popular Culture Research Cluster. It is therefore both timely and fitting that a Limerick-based university so committed to promoting culture and the performing arts chooses to honour the globally significant achievements of four of Limerick’s citizens. Noel, Mike, Fergal and members of the O’Riordan family, we are delighted to honour you and Dolores here today.

President, I present to you The Cranberries and ask that you confer the honorary degree of Doctor of Letters upon Noel Hogan, Mike Hogan and Fergal Lawler and upon Dolores O’Riordan (posthumously).