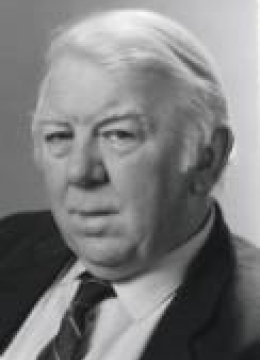 The University of Limerick is pleased  to honour today a native of Limerick City who has ensured that the language, history, stories and songs of Ireland are known throughout the world.  Ciarán Mac Mathúna, once of Mulgrave Street, Limerick and the CBS, Sexton Street, seems a warm and familiar friend to those of us accustomed to listening to his gentle tones and evocative selection of music on the much-loved Sunday morning programme, Mo Cheol Thú.  Quoting his friend, Donal Foley's response to the programme, Ciarán Mac Mathúna comments, "Donal . . .said it was the most marvellous programme on the radio because if he had chanced to waken on a Sunday morning just after eight o'clock, I could be guaranteed to put him back to sleep in two minutes flat, and that's a nice thing to have said of it".

Ciarán Mac Mathúna's career as a teacher, an employee of the Placenames Commission and with RTE has always involved working with people.  His interest in preserving important oral traditions and folk customs coupled with that rare talent of sympathetic listening has given him access to precious archival material, much of which has been broadcast on A Job of Journeywork, American Journeywork and Mo Cheol Thú which recently celebrated its twenty-fifth birthday.

Ciarán Mac Mathúna travelled extensively in America, Canada, Norway and Sweden recording the story of Irish traditional music and gathering the folk music of other countries.  His programmes for radio and television have received international acclaim:  The Pleasures of Galway won the national award for radio folklore music in the Czech Republic in 1987; and his Irish music feature programme on Matt Molloy and James Galway won the premier award at the Prague International Television Festival.  A number of publications on Irish traditional music and culture have appeared in German, Irish and American journals and books and he has served on the Cultural Relations Committee of the Department of Foreign Affairs.  The Touch of the Master's Hand, a compilation of highlights from Mo Cheol Thú, appeared in 1995.

We hope that today's award will prove a fitting addition to the two Jacobs' Awards and the Honorary Doctorate with which Ciarán Mac Mathúna was honoured in 1990 by University College Galway.  We hope too that Ciarán Mac Mathúna's voice continues to soar skyward with 'the lark in the clear air' and so testify to the truth of Addison's couplet,

And all of heaven we have below.