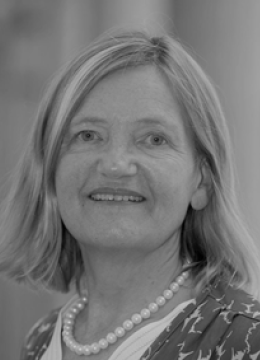 As we gather here in the comfortable surroundings of this world-class concert hall in the University of Limerick, it is perhaps difficult to appreciate that this institution was not always as settled and secure as it is today. If anyone knows this, it is surely Brigid Laffan, a world-leading academic and one of the 113 founding students admitted in 1972 to a bold new project known as the National Institute for Higher Education. ‘Europe’ was the theme adopted when planning the new institution, and the pioneering degree in European Studies, which young Brigid Burns knew was the right course for her, was NIHE’s flagship programme. Brigid has described the fledgling college as a place where students and staff were expected to not only fulfil their academic roles but be institution builders.

As an academic, a leader and – perhaps most importantly – an institution builder, Professor Brigid Laffan’s achievements are many and varied. As Director of the Robert Schuman Centre for Advanced Studies in Florence, she occupied one of Europe’s most prestigious academic positions. She has published ten books and written countless journal articles and book chapters, and she is the recipient of awards as illustrious as the Ordre national du Mérite – an accolade conferred by the president of France. In 2014, she received a Lifetime Achievement Award from the University Association for Contemporary European Studies, and she has been conferred with an honorary doctorate both by the National University of Ireland and the University of Edinburgh. She has been honoured twice by her alma mater – in 1991 with the Chairman’s Award for Distinguished Graduates and in 2018 with the Outstanding Achievement UL Alumni Award.

Brigid Laffan’s contribution to the world extends far beyond research and academia. If there is one trait that she has carried with her from her time as an undergraduate at NIHE, it is her ability to help build pioneering projects, ideas and institutions from the ground up. Brigid is widely acknowledged as one of the world’s leading experts on European policy and is a major contributor to the conversation about how the European project affects Ireland’s foreign policy. Having written extensively in recent years on the subject of Britain’s departure from the European Union, she is a renowned expert on all things Brexit.

The 1970s was a fraught and controversial period for NIHE, and Brigid Laffan was part of a cohort of students who were caught in the middle of a battle for control of the institute. While many of NIHE’s decision-makers were forced to bite their tongue on government proposals that its degrees be awarded by the National University of Ireland, Brigid and her fellow students were not bound by the same diplomatic restrictions. They were rebellious and unflinching and fought hard against government policies that would jeopardise the independence of their college. Indeed, while they had to wait until 1977 – a year after they completed their degree programmes – to actually graduate, it was clear to those working in NIHE at the time that these students were destined to be high achievers in their chosen careers.

Soon after graduating from NIHE, Brigid Laffan’s career began in earnest when she became a research co-ordinator at the College of Europe in Bruges. She returned to NIHE in 1978 to lecture, which she did until 1986. As both a student and lecturer at NIHE, Brigid did an enormous amount of work to advance the discipline of European Studies.

Brigid Laffan then spent three years working at the Institute of Public Administration, after which she was awarded a Newman Fellowship at University College Dublin. She was subsequently appointed as Jean Monnet Professor of European Politics and was the founding director of the college’s Dublin European Institute. She served as principal of the College of Human Sciences for seven years and was appointed a UCD vice-president in 2005.

In 2013, Professor Laffan was recruited by the distinguished European University Institute in Florence and appointed as Director of the Robert Schuman Centre for Advanced Studies. There she directed two key research projects: the Global Governance Programme and the European Governance and Politics Programme. Part of her role involved leading the team behind the annual EUI State of the Union conference, a forum for high-level discussion on the European project, which draws the EU’s biggest names to Florence every year.

Since retiring from the EUI in August 2021 and relocating to Dublin, Emeritus Professor Laffan continues to work on large EU collaborative research projects. Two examples of such projects led by Brigid illustrate the extent to which retirement in its true sense is still a long way off for her: the recently concluded InDivEU project looked at ways of integrating diversity in the EU while the ongoing Horizon 2020 DiCE project aims to translate research on differentiation into accessible policy advice for policymakers at European, national and regional levels.

Despite such lofty achievements, Brigid Laffan is as down to earth today as she was as a student. She is fiercely loyal to her roots in Cahersiveen, County Kerry and is an ardent supporter of the county’s Gaelic footballers. She met her future husband, Michael Laffan, at NIHE – he was also a founding student of the college – and the couple had three children, Diarmuid, Kate and Róisín. Brigid and Michael were further blessed when their daughter Kate presented them with their first beloved grandchild, Aida. Today is a bitter-sweet occasion for Brigid and her family due to Michael’s absence following his premature death in January of this year. We all join in expressing our deepest sympathy to Brigid, Diarmuid, Kate and Róisín on their great loss.

It is not an exaggeration to say that Brigid Laffan’s time in NIHE shaped many of her future achievements and that the dynamism and resourcefulness she brought to all aspects of her career were characteristics she cultivated in those early days at the institute. Everywhere her career has taken her – from NIHE, to UCD, to the Tuscan foothills and back to Dublin – Professor Brigid Laffan has played a crucial role in building world-class research that has helped guide the evolution of the European Union, and her legacy is to be found in every institution she has graced. It is with the utmost admiration and pride that we honour her here today.

Chancellor, I present to you Brigid Laffan and ask that you confer upon her the honorary degree of Doctor of Letters.