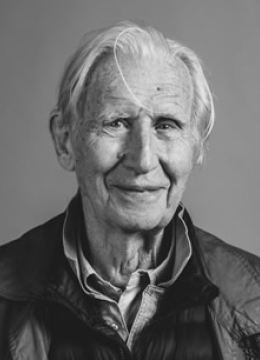 Today, the University of Limerick honours a unique artist, or should I say that a number of personalities within the persona of a unique artist are being honoured. Brian O’Doherty has put it thus: “I speak of ‘I’, and that notion of myself… is strange to me, for there are several persons I have met in recent months, all of them myself”. So in the work of Brian O’Doherty we can relate to Sigmund Bode, Mary Josephson, William Maginn and, most famously, Patrick Ireland. Indeed, President, ladies and gentlemen, this university and all of us here today are witnessing something very unusual in academe, and that is the posthumous award of an honorary degree to a recipient who is present to accept it!

This unique occurrence emanates from one of the ‘selfs’ within Brian O’Doherty, namely, Patrick Ireland, who was introduced to art and politics in 1972 in Name Change, a structural play without words, performed at the Project Theatre. Outraged at the Bloody Sunday killing of thirteen unarmed citizens of Derry, O’Doherty determined to make a solemn and enduring political statement by assuming a name by which he would hithertofore announce his artistic work, a signature carefully chosen to serve as an irritatingly constant reminder to the body politic that art could be an effective harbinger of political remonstration. Thirty-six years later, following the establishment of power sharing in Northern Ireland, a carefully choreographed event marked the demise, wake, funeral cortege and solemn burial of Patrick Ireland at the Irish Museum of Modern Art, where he rests in peaceful perpetuity.

Apart from the personalities within the artist that is Brian O’Doherty (his paintings are acknowledged in no fewer than five retrospective exhibitions hosted by galleries in Washington D.C. (1986), Wisconsin and New York (1993/94), Ohio (1994), Derry (1998) and Dublin and New York (2006/7)), there are diverse creative talents struggling to express themselves in harmony, sometimes in solo performances as a writer or painter, sometimes in concert, as in the ‘Rope Drawings’, in which the precision of architecture and the colour and contrast of painting are brought into spatial harmony. Many ‘Rope Drawings’ grace galleries and public spaces in many countries, including the Charles Institute in University College Dublin. When discussing this project, Brian told me that the ‘Rope Drawings’ captured for him the feeling that motivates dancers to throw themselves into space with the desire to remain suspended therein – an impossibility for them as dancers but not for him as the creator of the ‘Rope Drawings’. Indeed, it is interesting to see the profundity of this seemingly casual observation now influencing the performance of dance. Earlier this month, I/Thou, “a dance of connection in a disconnected world”, was premiered at the Cork Opera House as part of the Sirius Arts Centre’s year-long programme celebrating O’Doherty’s remarkable career. The inspiration for this production was not the Rope Drawings but the similar freedom expressed in a series of abstract murals painted by O’Doherty in the Sirius Art Gallery in Cobh in 1996 (working then as Patrick Ireland), which were rediscovered and restored only this year.

I am further drawn to the perceptiveness of the ‘Rope Drawings’ as I am to the minimalism in much of Samuel Beckett’s drama, a not inappropriate similarity, as both artists, though never destined to meet, trod similar paths along the Grand Canal to pay homage to Jack Yeats in the Portabello Nursing Home. O’Doherty drew the last-ever sketch of the artist before he succumbed to Yeats’s advice to abandon medicine and devote himself to an artistic career. Indeed, both Beckett and O’Doherty would each continue to acknowledge not only Yeats’s artistic integrity but also his influence on them with his insistence that the inspiring muse must be served unconditionally, however great the pain. And there is a further association with Beckett; in 2011, O’Doherty, with an uncanny ability to choreograph disparate themes, produced Hello Sam in the National Gallery of Ireland in a daring attempt to traverse the barrier that death seemingly inflicts on life or, put another way, to invoke a “willing suspension of disbelief”.

Fellow-artist George Segal has described O’Doherty’s drawings as “the greatest oeuvre of drawings by any post-War American artist”. This statement exemplifies the fate that seems inevitably to befall Ireland’s exiled artists – the land of their adoption claims them often for no other reason than the land of their birth forgets them, at least until they become celebrities to be seized upon for reasons that usually have little to do with their art.

Brian O’Doherty was born in 1928, not too far from here, in Ballaghaderreen, County Roscommon. Born into a family of doctors, he always harboured ambitions of becoming an artist but instead, at his father’s behest, studied medicine at University College Dublin. After engaging in postgraduate work in experimental psychology at Cambridge University, he went on to obtain a master’s degree in public health from Harvard University in 1958. He departed Ireland as a young doctor, relieved to escape the intellectually stifling atmosphere of the nineteen-fifties created by that most efficient dictatorship between Church and State, and he did so with confidence – confident in his belief in self and in his belief that he could find new ways – not just to confound the old ways – for us to see what was around us and to see ourselves. He expressed it thus: “He (i.e. the genuine creator) is involved in breaking the rules to contribute to a new definition of individual freedom within society … we need the dissenter and the stimulation of meeting the challenge he provides.”

In probing beneath the surface of Brian O’Doherty’s art, we are drawn inevitably to his novels – The Crossdresser’s Secret, The Strange Case of Mademoiselle P and The Deposition of Fr. McGreevy, which, incidentally, was nominated for the Booker Prize. We must grapple with the mathematical and linguistic mysteries of the Ogham script, and we would do well to acquaint ourselves with the ways of ontology and epistemology. It would be wrong, I believe, not to examine also the influence of O’Doherty’s original avocation – medicine – on his art. We see this most strikingly in the wonderful Portrait of Marcel Duchamp: Lead 1, slow heartbeat and Duchamp Boxed, in which, by using the electrocardiograph, O’Doherty has given to Duchamp strange immortality in that the Portrait lives on long after the death of Duchamp – not the first time this evening that we have touched upon the artist ‘cheating the Gods’!

And so, President, ladies and gentlemen, we have before us a doctor, an artist, a writer, a philosopher, a personality who is best described by that much-maligned term, polymath, who left Ireland to forge his art in the competitive milieu of Manhattan, where he challenged the conventions of modernism to become one of the most respected leaders of postmodernist art. As one commentator put it: “Few artists since Marcel Duchamp … have pushed us so hard or given us so much to digest as Patrick Ireland.” Though he departed Ireland, he has returned often and returned with generosity, as is exemplified in the magnificent gift to the nation of the Novak/O’Doherty collection of post-War American art to the Irish Museum of Modern Art, named jointly with his wife, herself a renowned art critic and accomplished artist.

Today, the University of Limerick honours Brian O’Doherty in recognition of his contribution to national and international art. Time does not permit a detailed “examination” of his multi-dimensional artistic achievements with interactions between art and mathematics, architecture, philosophy, politics, literature and medicine. Whereas at the expressive level O’Doherty may be categorised simply as a painter, a sculptor, a dramatist or a novelist depending on your point of view, there is then the more complex and rewarding interpretation of the artist in the totality of his being when, as a philosopher, he draws from the rudiments of the past and the occult influence of primitive language to probe disturbingly and ruthlessly, as one commentator has put it rather nicely, the ‘I’, the ‘Here’ and the ‘Now’ – in short, the very meaning of existence, the so-called human condition.

President, I present to you Brian O’Doherty and ask that you confer upon him the honorary degree of Doctor of Letters.