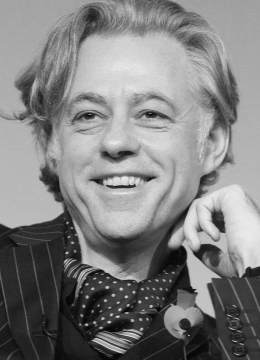 One thing that has remained enduringly true over the course of Bob Geldof’s life is that – in his own words – it is not in his nature to “shut up.” Throughout his remarkable career as an artist, author, entrepreneur and tireless campaigner for justice, he has tackled some of the most important issues facing the world. Be it through his immense contributions to music and literature or his decades-long struggle against poverty and discrimination on behalf of the world’s most vulnerable people, Bob Geldof has never shied away from his mission to make the world a better place.

It is difficult to know where to begin appraising the life of one of the world’s foremost humanitarians. To start at the very beginning, Robert Frederick Zenon Geldof was born in Dún Laoghaire in 1951 and educated in Blackrock College. After working as a music journalist in Canada, he returned home and started the Boomtown Rats in 1975 at the age of twenty-four. A year later, the Rats moved to London in search of success. They quickly found it. The band’s first single, Lookin’ After No. 1, spent nine weeks in the UK charts, and they subsequently made the Top Forty with nine consecutive singles, achieving worldwide acclaim in the process. Combining razor-sharp lyrics and a ferocious on-stage presence with a deep understanding of social issues, Bob Geldof was – and continues to be – the band’s magic ingredient. Blessed with the economy of the born wordsmith and the charisma of a true rock-and-roller, Geldof has thrilled audiences for decades, both with the Boomtown Rats and as a solo performer.

Given his intelligence, fearlessness and compassionate nature, maybe it was only natural, and inevitable, that Bob Geldof would come to be viewed as the leader of the fight against famine in Africa. At a time when the world was divided – as Bob put it – between abundance and desperate need, he stepped up to the mark and became one of the strongest voices on behalf of those in desperate need. Bob speaks with an easy eloquence – and colour! – but perhaps even more importantly, he is a dogged and uncompromising activist for change.

In 1984, the man who made it impossible to ignore mass starvation co-founded the international supergroup Band Aid to raise money for famine relief in Ethiopia. In November 1984, the band recorded Do They Know It’s Christmas?, the UK’s fastest-selling single of all time. Co-written by Bob Geldof and Midge Ure, the record sold almost four million copies worldwide. A year later, Geldof organised Live Aid, one of the most ambitious undertakings in the history of music. Held simultaneously at Wembley Stadium in London and in the John F. Kennedy Stadium in Philadelphia on Saturday July 13th 1985, the concert was attended by nearly 200,000 people and watched on television by an estimated 1.9 billion viewers, making it one of the most widely viewed television broadcasts in history.

Although organising Live Aid was a monumental task, Geldof never lost sight of his core mission: raising money to save the lives of famine-stricken people. According to estimates, the project raised around £150 million for famine relief. It is not an exaggeration to suggest that there are hundreds of thousands of people alive today because of Bob Geldof’s rage, courage and deeds.

Turning his attention from immediate famine relief to tackling its causes and securing debt relief for the poorest African nations, Bob Geldof has never stopped speaking out about Africa. Today, he is a member of the Africa Progress Panel, a group of ten experts fighting for fair and just development in Africa. As an ardent campaigner for a better world, he has never wasted time worrying about party politics or fretted about the personal consequences of his demands for change. For Bob Geldof, the goal is greater: a world without poverty and without injustice.

Bob Geldof throws himself body and soul into everything he does. He is a successful entrepreneur and possesses the spark of creativity required to get a business off the ground. He is also the author of a bestselling memoir, Is That It?, and starred in the film version of Pink Floyd’s The Wall. It seems there is little this man cannot do.

His talent may speak for itself, but when Bob Geldof himself speaks, people listen. He has said that “music is something I must do, business is something I need to do, and Africa is something I have to do.” He has a keen sense of duty, and the recognition he has received for his efforts – including an honorary knighthood and a Man of Peace award – is just reward for a life spent fighting for what is right. Whatever he turns his hand to – from culture to world peace – Bob Geldof has invariably left an indelible mark, and it is with the greatest admiration that we welcome and honour him here today.

President, I present to you Sir Robert Geldof and ask that you confer upon him the honorary degree of Doctor of Letters.