In order to understand the significance of MPMs it is necessary to first understand the three stages of drug discovery and development, D3.  Stage 1 of D3 starts with the discovery of a specific molecule, a lead compound, which is an outcome of the medicinal chemistry process. Medicinal chemistry involves the synthesis of a family of derivatives of a parent molecule to optimize physicochemical and biological properties in order to discover the lead compound. Once a molecule with promising biological activity has been identified then a second stage, which is called pre-formulation, identifies a solid form of the molecule (i.e. a material) that has optimal physicochemical properties. This material is called a drug substance or active pharmaceutical ingredient (API). When an API is combined with other materials, called excipients, it enters the third and final stage of D3, also known as formulation. An excipient is a pharmacologically inactive ingredient that enables a drug product (e.g. it controls the rate of disintegration and dissolution or helps to prevent moisture from entering the drug product, etc.).The drug product or medicine that is thereby produced is most commonly produced in the form of a tablet.

Why are MPMs of interest?

When APIs form MPMs the driving force is typically a supramolecular synthon (e.g. a hydrogen bond), which exploits the supramolecular chemistry and shape of the API, the very features that enable the biological activity of an API, to control solid-state composition and form of an API. To put this in context, in pharmaceutical science, the study of the crystal form of an API, in particular, its physicochemical properties relevant to clinical performance and long term stability, represents an important aspect of modern drug development. Indeed, even long-used drugs such as aspirin and many antibiotics owe their purity and storage-stability to their existence as crystalline solids. Pharmaceutical cocrystals only emerged in the early part of the past decade as a promising new weapon in the arsenal of drug development, fuelled by the realization that they can be rationally designed and profoundly impact the physicochemical properties and, therefore, bioavailability of APIs.4 Cocrystals are unlike traditional classes of crystal form such as polymorphs, salts and solvates for the following reasons:

Consequently, MPMs offer significant opportunities for intellectual property and improved medicines. It should, therefore, be unsurprising that there has been a concurrent rise in patent activity concerning pharmaceutical cocrystals5 and regulatory bodies are developing guidelines that address approval of pharmaceutical cocrystals in drug products.6 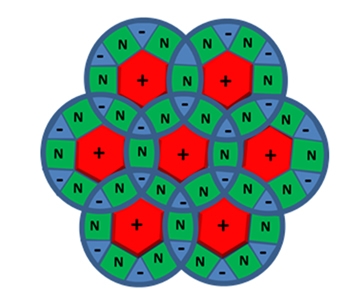 How are Ionic Cocrystals prepared?

Ionic cocrystals can be conveniently prepared from a salt + another neutral molecule or salt via solution crystallization, slurry or mechanochemistry (grinding).

Why are Ionic Cocrystals of interest?