The goal of my project was to investigate how a sample of visual artists interacted with Augmented Reality (AR), 3D printed and live physical models in the practice of observational drawing and to evaluate their experience of using the three representations as drawing subjects. It incorporated an experimental workshop in which artists were asked to draw from observation the model of a hand in each of the three representations and then make comparisons between the three.

The artists’ keen observations expressed through their drawing process, coupled with an investigation of how they interacted with the subjects revealed some insights into their experience of viewing digital objects with AR. I had hypothesized that a human-centered understanding could be gained through this process, which might be applicable to the design of interactive technology such as an AR app to help people learn how to draw. I used qualitative research methods and took a phenomenological approach. The results endorsed AR as a favourable tool to support certain aspects of learning drawing and I discussed some AR design issues and unique affordances in the report.

A significant portion of my project involved learning how to make the 3D digital models for the drawing workshop. I learned photogrammetry and 3D digital modelling to make the digital objects for both 3D printing and uploading to an Augmented Reality app. I used a DSLR camera and Meshroom software for the photogrammetry and I carried out the 3D printing in the FabLab Limerick on a Prusai3 printer. Aryzon’s AR Studio app on iPad Pro was used in the workshop to display the hand models for the artists to draw from.

Marie-Clare Boothman has a background in art. She returned to education as a mature student to study Digital Media Design at the University of Limerick. While at University Limerick, she also undertook an eight-month internship at the Interaction Design Centre. 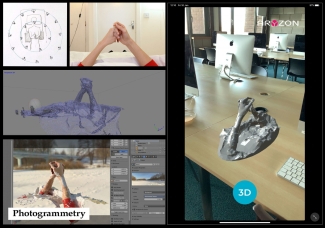 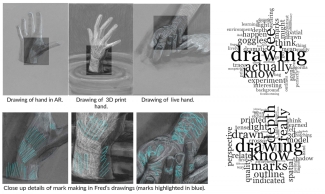 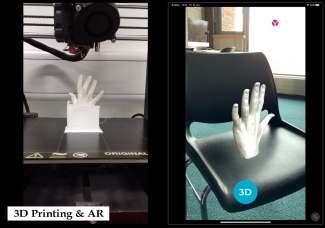 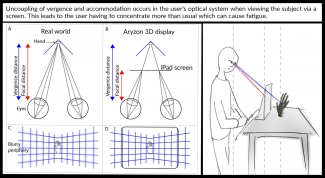