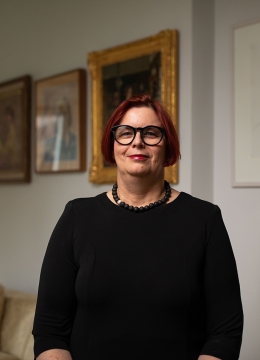 In 2020, Professor Kerstin Mey assumed her role as President of the University of Limerick.

Over the past 25 years, Kerstin Mey has built a track record of successfully initiating and implementing pioneering academic and research initiatives and cultural projects in higher education. As an experienced leader and senior manager, she led major infrastructure and culture change programmes and set up a range of strategic external partnerships.

After studying for an MA equivalent in Art and German language and literature at Humboldt University of Berlin, Germany, and obtaining a PhD in Art Theory and Aesthetics there, Kerstin Mey held academic positions in universities in Germany and the UK. Before she joined the University of Westminster as Pro-Vice Chancellor and Dean of Media, Arts and Design, and Professor of Contemporary Art and Theory in 2013, she was Director for Research and Enterprise at the University for the Creative Arts, UK. From 2009–2013, she led the research strand Art and its Locations in Interface: Centre for Research in Art, Technologies and Design at the University of Ulster and was Director of the Research Institute of Art and Design there.

Kerstin’s research is concerned with contemporary art in relation to identity formation, digital literacies, cross-disciplinary connectivities, documentation and archives. She gives consideration to participatory and socially engaged creative practices and public pedagogies more generally. Publications include:  the authored book Art and Obscenity (2007); and, amongst others, the edited volumes: with Smite and Smites, Artistic Research (2011); with Kroenke and Spielmann, Kulturelle Umbrüche: Identitäten, Räume, Repräsentationen (2007); On-Site/In-Sight, special issue Journal of Visual Art Practice, Vols. 4.1/4.2 (2005); Art in the Making. Aesthetics, Historicity and Practice (2004) and Sculpsit (2001).