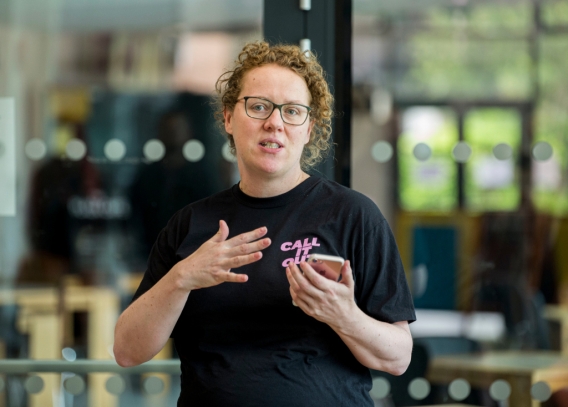 Dr Jennifer Schweppe of the Hate and Hostility Research Group (HHRG) at University of Limerick, who presented to the UN Committee on the Elimination of All Forms of Racial Discrimination (CERD) on the issue of hate crime and related matters Picture: Alan Place

A report by researchers based at University of Limerick presented to a United Nations Committee has said that the Irish State is failing to meet its obligations in relation to hate crime.

The Hate and Hostility Research Group (HHRG) at University of Limerick (UL) was asked by the Coalition Against Hate Crime to write an alternative report for the UN Committee on the Elimination of All Forms of Racial Discrimination (CERD) on the issue of hate crime and related matters.

Presenting to the committee on its findings this Monday morning at the United Nations in Geneva, the HHRG, led by Dr Jennifer Schweppe and Dr Amanda Haynes of UL, along with Dr Sindy Joyce, said that a majority of previous recommendations by the committee have not been implemented by the Irish State.

Dr Sindy Joyce stated: “Ireland, and its police, are wilfully ignoring racial profiling, which is highlighted in the fact that children as young as four years of age were entered onto the Garda Pulse system and given criminal tag numbers.”

Dr Amanda Haynes added: “These hearings give us an important opportunity to highlight the policy vacuum in Ireland with respect to hate crime.”

The report examined four specific issues and presented findings and summary recommendations for each.

Issue one relates to the Prohibition of Incitement to Hatred Act 1989. The researchers found that it was not clear how many convictions there have been under the act; that civil society organisations, academics and practitioners have described the act as ineffective; and that the Irish Law Reform Commission considers the Act to be ineffectual in combatting online hate speech; according to the State in its reports to CERD, the Act has been undergoing review for almost two decades; a recently announced public consultation on the 1989 Act characterises its aims as addressing hate speech and asks the general population their views on protecting the rights of minority populations.

Issue two relates to hate crime: Summary findings include that data collected indicates that a majority of victims of hate crime in Ireland do not report to the police; research shows that the hate element of a crime is often ‘disappeared’ through the criminal process due to a lack of training and the absence of legislation; and that, according to the State in its own reports to CERD, the question as to whether hate crime legislation should be introduced has been under ongoing review for almost two decades.

Issue four examined training in the criminal justice process and showed that there are only 247 Ethnic Liaison Officers (ELOs) available across the State, and the new Garda Diversity and Inclusion Strategy omits any reference, or commitment, to the role; research has documented significant shortcomings in the training made available to ELOS and likewise to Gardai; and there has been no relevant judicial training.

The report makes a series of its own recommendations, including publishing the outcomes of the Department of Justice and Equality’s review of the 1989 act “as a matter of urgency” and providing training across the criminal justice sector.

Dr Jennifer Schweppe explained: “The State has had hate crime and hate speech under review for nearly two decades, without action. The Committee has chosen hate crime and incitement to hatred as two issues it specifically wants the State to address and we look forward to having a discussion with the Committee on these issues.”

The report is available online: https://bit.ly/2qW9bJn