The Limerick Irish Algerian Friendship Group (LIAF) was officially launched at an event at the Limerick Milk Market on 11 July with some 150 participants, including not only well over 100 AHSS ISPhD students from Algeria but also many of their supervisors, the new Mayor of Limerick Daniel Butler, UL Deputy President Prof Nigel Healy, members from Limerick City and County Council and others interested in LIAF. The participants were treated to a light brunch, supplied by Green Acres, and wonderful Irish traditional music thanks to traditional musicians Mickey Dunne and Family. The musical contributions from the Algerian students themselves also added to a truly joyous event. A slideshow of photographs was created by Sean Shinners and can be accessed here: https://vimeo.com/573693774.

Due to numbers, two settings were held and afterwards the participants had a choice of guided tours of Limerick, with tours by Archaeological Historian (and LIAF Steering Group member) Dr Judith Hill and Erasmus student Maren Geib proving to be especially popular.

At the heart of the Limerick Irish Algerian Friendship Group (LIAF) are 134 Algerian PhD students who took up studies at the University of Limerick virtually last year and (after several delays due to Covid-19) made it to Limerick in January of this year. The aims of LIAF are to help develop a second home for the Algerian PhD students at UL, to strengthen relations between the two countries and to support the multicultural drive and internationalisation developments of Limerick City and County. This inaugural event was a great starting point for all of this and most of all it allowed a first face-to-face meeting of the ISPhD students with many of their key contacts and to start new friendships. A next event is already planned – an Algerian picnic in UL on 27 August. 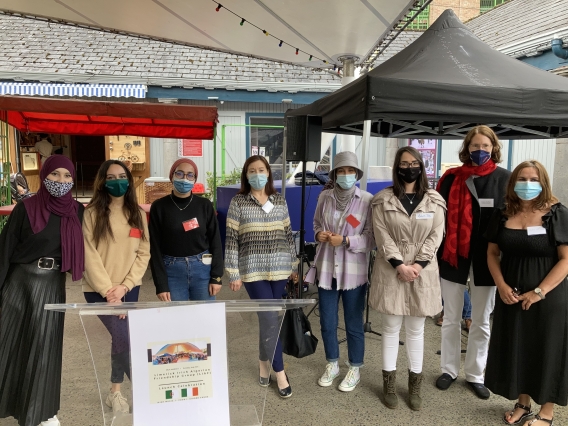