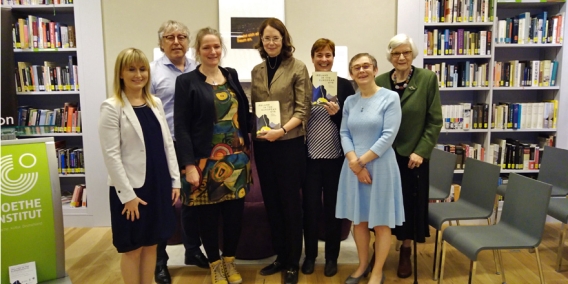 Congratulations to our colleagues in the School of Modern Languages and and Applied Linguistics on the launch of their publication Ireland in the European Eye. The book had its official Irish launch on Thursday evening, 7 November, at an event in Goethe-Institut Irland.

Dr Thomas Lier, the director of the institute, hosted the evening celebrating the achievement of the 20 contributors to collection and its co-editors Gisela Holfter and Bettina Migge. This timely publication offers a comprehensive survey of Ireland’s place in Europe, through a detailed narrative of a cultural relationship that began with Irish missionaries bringing Christianity and learning to the continent. It asks how Ireland, her people and her culture have been perceived and represented in Europe, through contributions on film, music, art, architecture, media, literature and European studies.

The book had its debut in June at an event in the Irish embassy in Berlin, as part of a symposium marking 90 years of Irish-German diplomatic relations. The Dublin launch at Goethe-Institut Ireland continued the theme of highlighting and fostering the cultural ties between Ireland and Germany, as a reflection of Ireland’s links to Europe more widely.

As part of the celebrations, the editors and contributors also launched a series of vlogs titled 'Ireland in the European Eye: the story behind the book', where they discuss the origins of the book and offer snapshots of the content.

Ireland in the European Eye is available to buy on the RIA website.

More photos from the event can be found on Facebook.